I have been doing intermittent fasting all week, and I lost 1.3 pounds.  I am going to give it 3 more weeks just be thorough, but I feel like I am WAY TOO HUNGRY to have only lost 1.3 pounds.  But!  Also!  During my 8-hour eating window, I have most definitely been lying to My Fitness Pal, so there's that,  MAYBE I SHOULD JUST BUY BIGGER CLOTHES. Hashtag too old to get pregnant too old to lose weight.

Also between the black coffee and the hot lemon water, I am slightly worried about my teeth.  I just ordered some stainless steel straws from Amazon, so hopefully that'll help.  One of the obvious plus sides of not being pregnant or nursing is that I can bleach the shit out of my teeth, and I should have taken advantage of this sooner.

Also YES that is the second reference I have made to not having a baby, but the pregnancy I miscarried in March was supposed to yield a squishy little baby TODAY, so it's kind of on my mind.


It's still planet-dying-ly hot here, but these guys are making the most of their summer clothes and enjoying their before-school frolic time. 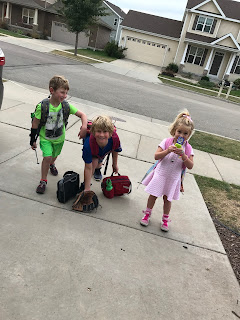 Speaking of school.  Can we pause to consider for one second how tightly Cooper requires me to tie his shoes? 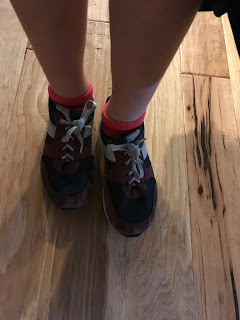 What in the hell are we going to do when it snows and he has to wear boots outside and put shoes on inside?  We have tried Plae and Tsukihoshi but neither one is TIGHT.  This is actually common for many of the shoes made for kids with sensory issues because more of them seem to like their shoes loose.  NOT COOPER.  He has an IEP for speech-- maybe we can add something about shoes so he can wear Uggs to gym class?  And then we buy him 2 pair of Uggs-- one of gym and one for everywhere else?  This sounds expensive.  Also Uggs are not ideal gym shoes.  Thoughts?  He really will not/ cannot wear shoes that feel loose. It's not something he can just soldier through, either.  The way his shoes feel matters DEEPLY to him.  He has suggested that I come to school and tie his shoes so tight my fingers bleed (THIS HAS HAPPENED, the bleeding, not the going to school), but this is not too practical.  Ok.  I just ordered these while typing this paragraph.  A $14 solution would be beyond amazing.

We went to open house at the elementary school, and it was a thousand times more adorable than I ever could have predicted,

This kid is just so PROUD of himself for being a kindergartener. 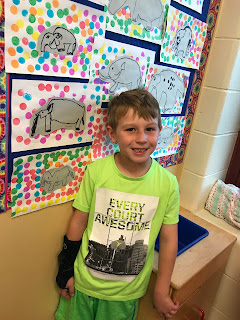 Cooper's classroom had a chart where you could sign up for items to donate. Cooper chose moon sand and wrote his name so sweetly on the big poster, that I knew I was going to have to remember to buy it.  So, I took out my phone and ordered it on Amazon RIGHT THERE IN THE ROOM. Bam!  Maybe the best use of my amazon app EVAR.  How's that for a multi-tasking pro-tip?

Also Jack says I am his hero, so there's that. 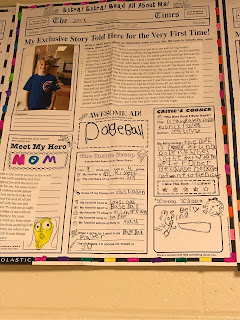 Jack seems to be having a good year so far, and he really likes his teacher.  He is also excited to be in Harry's old 4th grade classroom. 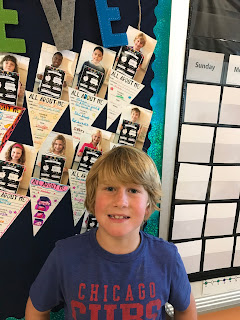 This is an I AM board in the cafeteria, and Jack contributed one of the cools.  Of course he did. 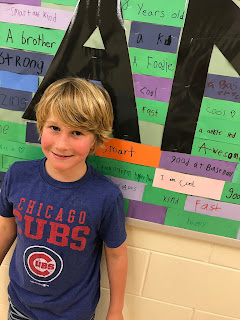 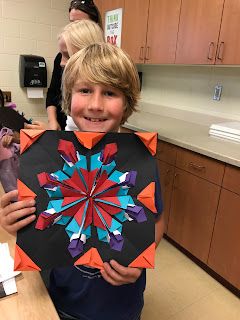 Here's Cooper's.  It was hard to get a lot of pictures of Cooper-- he's a quick one. 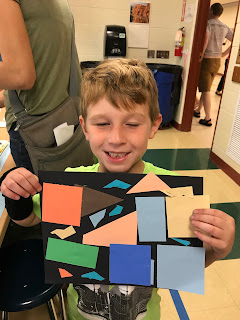 Yesterday, Cooper and Jack were walking to school as Dorothy and I were leaving, and she screamed "BYE LOVEY" to Cooper.  I was like oh that's sweet that you call him that, and she said, "Cooper is my lovey.  When I am scared or sad, I want him, and that's what a lovey is.  He makes me feel better."  HOW CUTE IS THAT?! 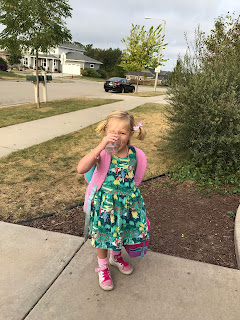 Harry aced a math test and a science project and did well on a social studies test-- his first time getting actual grades-- so I picked him up from cross country practice and took him to a new chocolate cafe that opened where out favorite bakery used to be.  WE APPROVE.  (Also, the lady behind the counter GAVE him the lollipop-- we only ordered the 2 candies and the coffee and the mousse.  WHY AREN'T I LOSING WEIGHT?) 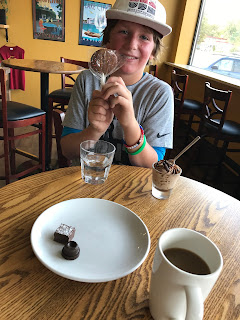 Dude.  You guys.  Dorothy told me that she "trasheded" her room, and she was sooooooo right. 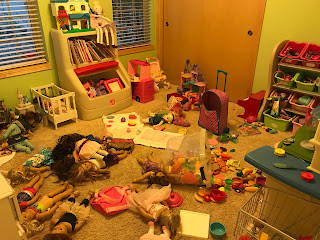 Instead of focusing on tight shoes, what about using compression socks?

Dorothy’s explanation of Lovey is so sweet!

Those shoes are the cutest shoes to ever be shoes and I am getting an orange pair for V and a blue pair for David!!!!!

These might not be tight enough, but what about those Merrell jungle mocs, sized down if necessary? They might work for snow and gym, and wouldn't loosen throughout the day. But those hi tops are awesome -- my first grader fell in love with orange patent Pumas with matching laces and soles, which were $60, of course. I could buy him 4 pairs of hi tops in rainbow colors for that price!

1. Have you seen the HBO movie Temple Grandin? Cooper's desire for tight shoes made me think of Grandin and her "squeezing cow" machine that she discovered helped with her autism. I think it might even be a movie the kids would like.

2. I have a friend doing 4-hour fasting (eats only between 5-9pm) - she said the first week or two were HORRIBLE, but now loves the energy she has!

3. I'm so very sorry for your sad non-birth day. Sending you peace!