In retrospect, I drank too much coffee, probably.

I have had an unusually productive morning, even by my standards.


I mean, now I can basically slack for the rest of the damn day.  KIDDING.  Sort of.  I have a fridge water filter to change, a book to read for a blog review, and a novel to write.

World's cutest sweatpants from H&M where I stopped after work to get Dorothy something My Little Pony to wear to the movie (omfg).  I texted a pic of them to Ben to see if he thought Coop would like them.  He predicted that the legs would be TOO TIGHT TOO TIGHT TOO TIGHT.  But I bought them anyway along with an ill-advised rainbow unicorn sweatshirt for me and then Cooper hated them OF COURSE and I had to take them back but damn they're cute.  Also, If you "need" to buy licensed character clothing for your kid, I totally recommend H&M-- their stuff is generally cuter than most. 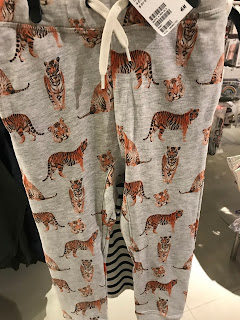 Read this short story to your kids.  James Thurber.  Its in many Thurber anthologies-- this is from My Life and Hard Times, which is so funny and a breeze to read. 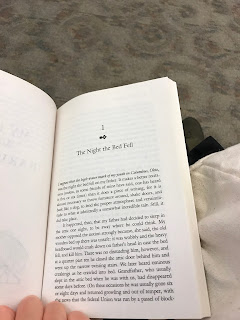 Harry and Ben had hickey try outs last night. Well, Harry did, and ben helicoptered on over.  I made pancakes for the other 3 and didn't put chocolate chips in them because Dorothy has decided she only like chocolate chips on the side and doesn't want anyone else to eat them any other way.  So then Cooper was like, Oh we are having pancake faces, which, of course, I found charming.  I served the berries, but he added the pretzels. 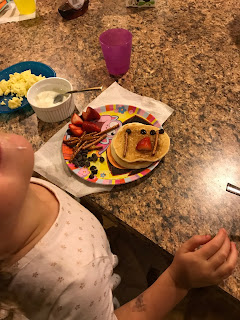 Beatrix woke up from a sound, smiling sleep (although not to sound-- see her perky little ears?) 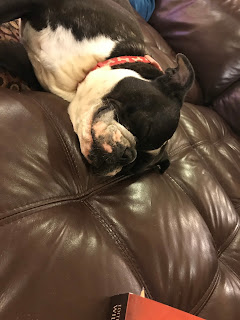 To bark her little face off at a pet food commercial that featured a golden retriever. 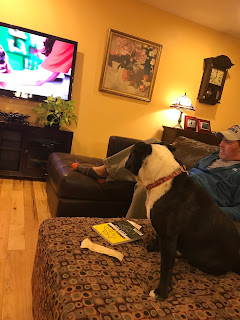 I DID NOT EAT A CRUMB OF THESE!! 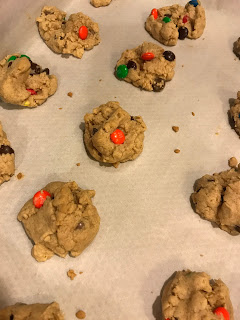 I have lost 4 pounds in 2 weeks of fasting intermittently, and it's awesome.  I am someone who can abstain more easily than I can indulge moderately because I live my entire life balanced at the edge of a slippery slope fallacy, so the 8-hour eating window works great. I also don't feel like I need to deprive myself when it's time to eat, so the 1200 calories that My Fitness Pal suggests I eat (1500 with exercise) go a LONG WAY.  If you are an upholder and an abstainer like me, I bet you'd like it, too.

And!  Because I fast until 12 or 13:30, I have started drinking my coffee black, and we are going through a half-gallon LESS MILK.  And I never counted my coffee-milk calories because I figured it was just skim milk and just a little, but it was CUPS of milk a week.  CUPS.

And one more thing!  I was worried about staining my teeth with black coffee, so I started drinking it from a stainless steel straw and my mom said that would burn my lips and I was all whatever lady and IT DID.  So now I like my coffee tepid.  And by like I mean tolerate.

I drink my coffee through glass straws, which do look a bit like drug paraphernalia, but don't burn your lips. I got mine on etsy!

Not to blow your straw bubble but my Mom was a devoted straw user during her 30s & 40s but now has the lines around her lips due to the habit. It’s usually associated with smoking but my mom hasn’t even held a cigarette. While you can barely see the lines (she’s aged well) they have made her life miserable because lipstick bleeds into them. She’s has to use lip primer and very specific brands of lipstick.
Her advise, drink your coffee as hot as you can take it and right out of the cup. If you’re worried about your teeth, brush extra.

Ben & Harry going to hickey tryouts made me laugh out loud.
Dorothy denying her siblings true chocolate chip pancakes made me sad.
Cooper turning lemons into lemonade made me adore him even more. He’s really come into his own over the last year.