Mid-week. I think we're going to make it! Did I jinx us?

I have lost 6 pounds in a month with intermittent fasting.   Ideally, I would have lost 8 pounds in a month-- 2 pounds a week-- but truthfully, it has been pretty easy to stick to and I have been able to eat kind of a lot in my 8-hour window. I am a fan.  If I could lose 8 pounds between now and November 22, that would be fantastic.  I will, of course, keep you posted, even if you don't really want me to.

Yesterday was A DAY.

I worked frantically all morning and then rushed out in the afternoon to help my brother enroll my nephew in daycare (we found a great place, and he starts on Tuesday, which might be a little disconcerting for a two-year-old because everyone will be in costume-- ha!), pick up the little kids to take them to the dentist, drop off a dinner I made for a friend, and then take Jack and Cooper to a cooking class at the library.  But!  Then!  We had to dash home as fast as we could so that Jack could cram a sandwich in his facehole and grab a warm coat, hat, and gloves (because after being 15 degrees above average all month, we are going to finish October with SNOW and temps that are 7-12 degrees BELOW average, bypassing normal all together) and get piked up by his Cb Scout en leader, who is a saint and drove a whole mess of fourth graders to a nature center for a 3-hour survival adventure.  They purified water.  It was intense.  Meanwhile, the rest of us ate a quick dinner in time for Harry to get picked up by a neighbor who was driving the hockey carpool.  I totes felt like Mrs. Hurdicure from Bain Candy by bedtime.

And it's not like today is any better because dance! and gymnastics/dinner! and another hockey!  and Ben has a late meeting!  GAH.

Cooper always looks too cool for school at the dentist.  He has a tooth that is weak?  The dentist thinks it is not a cavity, but rather a tooth that didn't develop properly, possibly linked to a fever?  This sounds like not-science to me, but what do I know?  Anyway, he has already had a filling on that tooth, and now he needs another one and might need a crown before he is 12.  Yikes.  Luckily, the office is amazing and Cooper loves to go there, and it takes approximately 11 minutes start to finish for them to fix kids' teeth.  Still, I hope Ben can take him to that appointment. 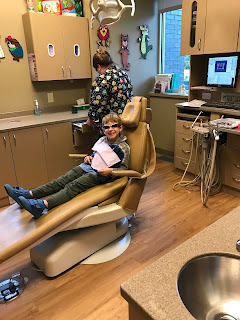 The library cooking class we attended was Dragons Love Tacos themed.  The kids made salsa and taco bowls and horchata smoothies, plus they got to hear BOTH books!  It was, as you might imagine, a HUGE hit.  Dorothy couldn't come because the age range was 6-10, and she was really, really sad about it. 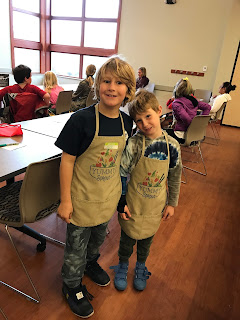 Look at how carefully they were cutting! 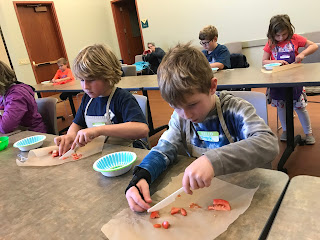 Cooper didn't like his tiny taco bowls, so Jack ate eight.  But Cooper DID like mashing up avocado. 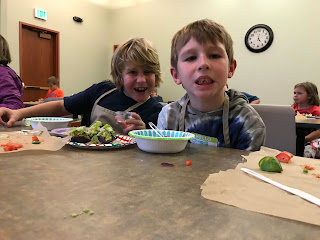 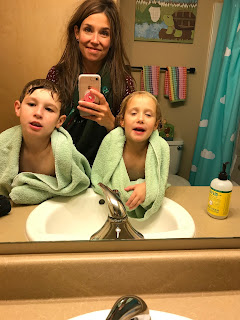 After the little kids go to bed, if I want to drink wine, I have about 45 minutes before my feeding window closes for the day, so I have to GET DOWN TO IT.  Usually, though, I need a few minutes to revel in the silence, and I never quite make it that far.  So, that's a perk of this diet, too.

I have a super judge-y Halloween candy post up on Madison Moms Blog today, so check it out here.  Look for a new podcast in a couple of days-- we posted one this weekend, too.  You can listen on our website or on iTunes.  Don't forget to subscribe or rate us. XOXO.
Posted by Sarah at 6:20 AM