On Friday, Jack's teacher sent home a class list and instructions that parents should NOT help kids write names on their Valentines.Jack immediately began asking us to take him to the store to buy cards.  We finally did today, and he immediately sat down and started painstakingly writing his friends names and signing his own.  He even got out his class picture so he could do the cards in line order-- looking at the picture helped him refresh his memory.  Adorableness overload. 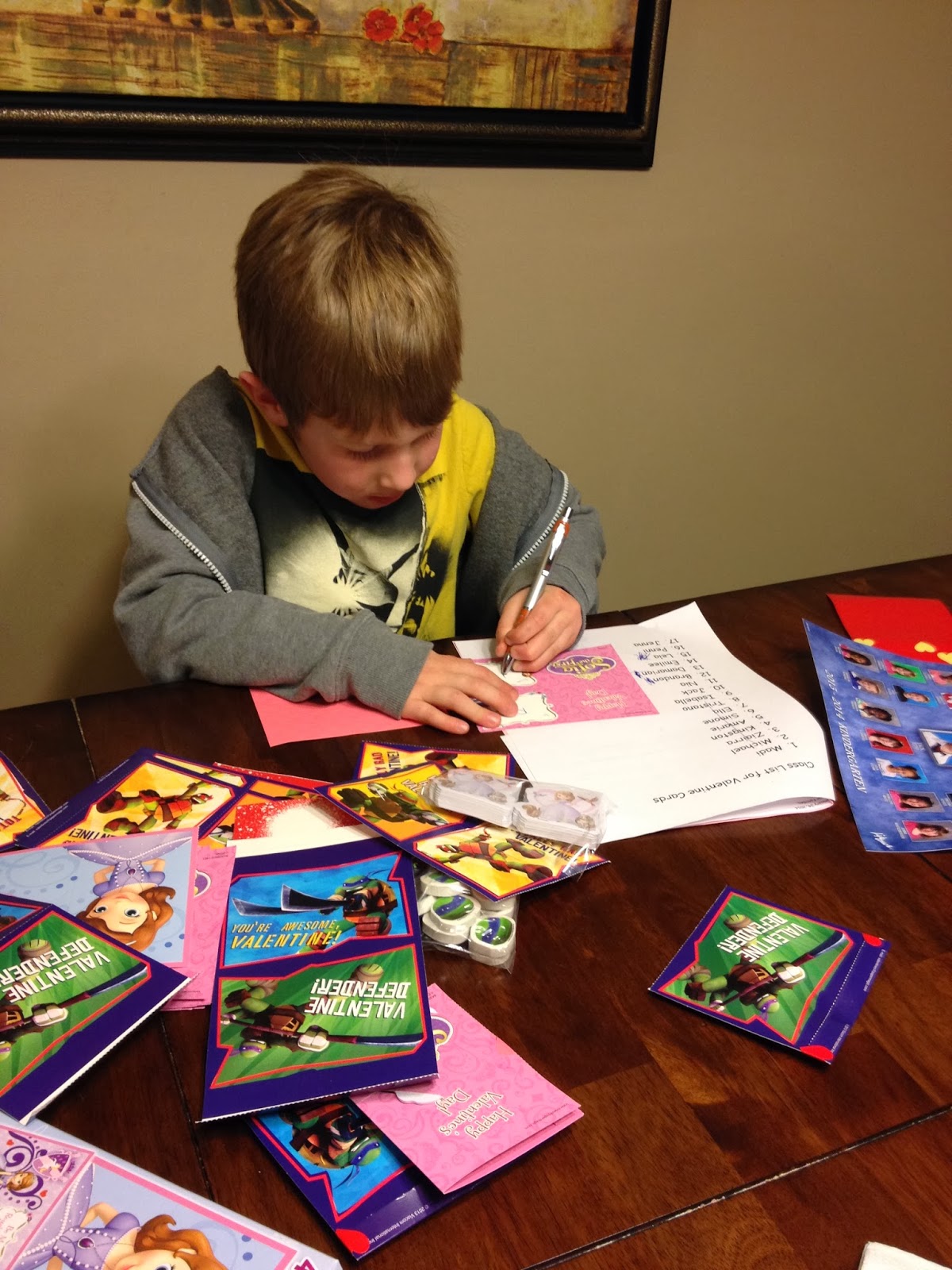 Cooper is majorly into his trains.  He builds tracks and makes train noises ALL DAY LONG.  He was sick last week, and I took him to the pediatrician's office for a strep test (SO FUN) and a train went by while we were in the exam room.  Cooper lit up and started saying CHOO CHOO.  The doctor ran across the room to the window to give Cooper a stool and open the blinds so he could watch it go by-- highlight of Coop's day for sure. 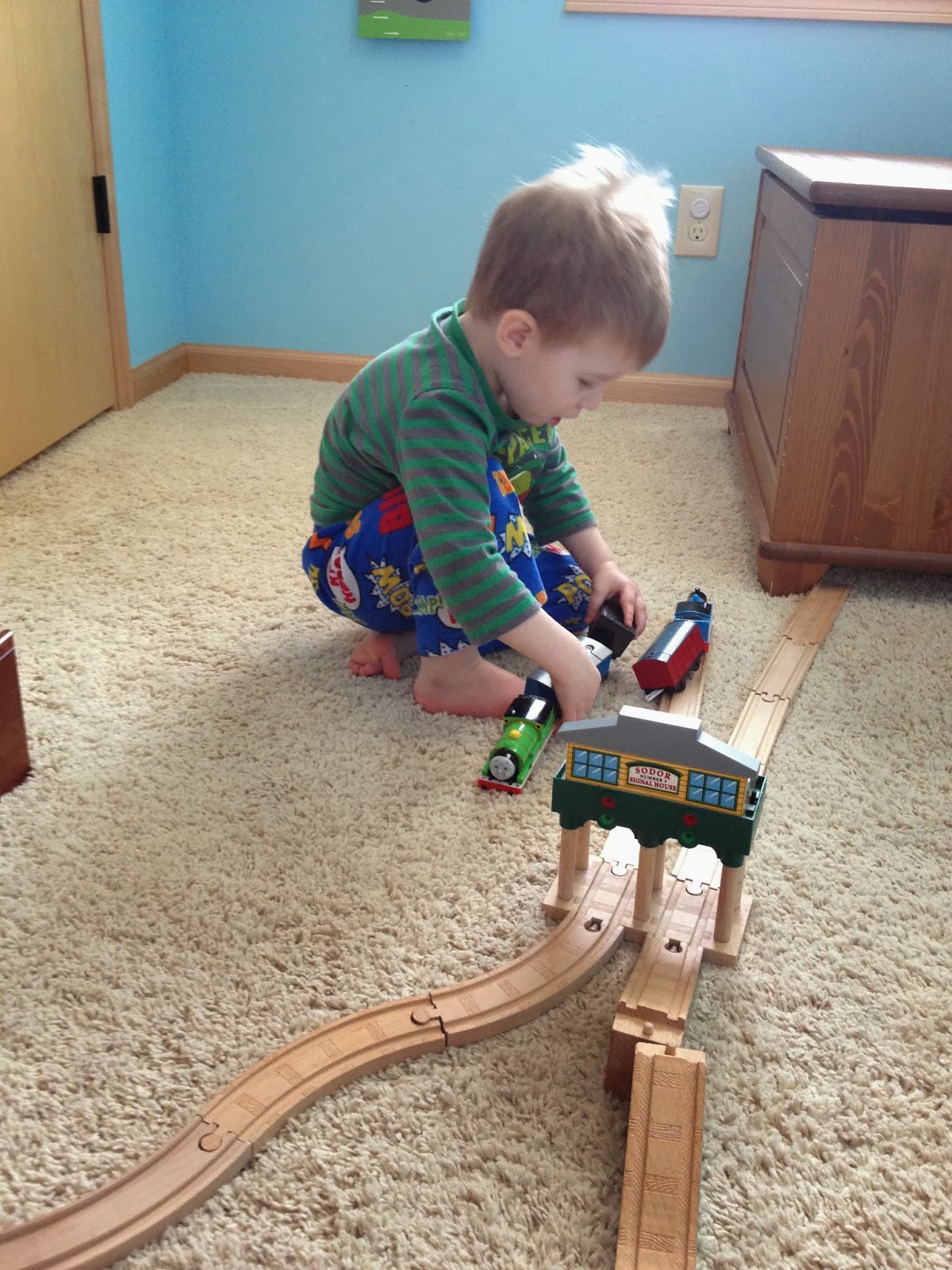 Harry stuffed his pants with dogs.  Totally normal, right?  He has chest pains.  We went to the ER last night.  They did an ultrasound and didn't see anything-- we are going to follow up with his cardiologist tomorrow and hopefully get in for an echo. 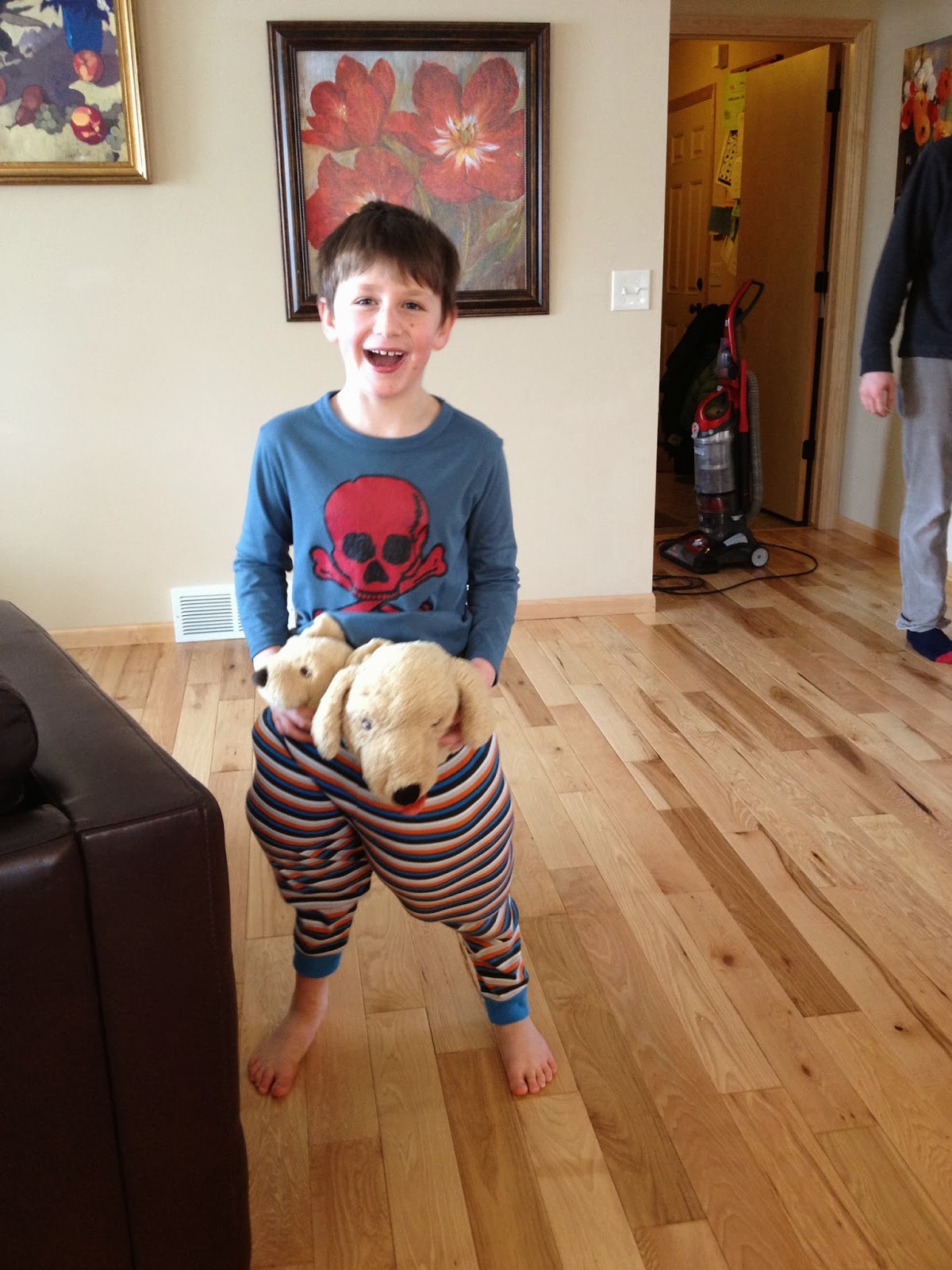 Harry dressed Dorothy in this Build a Bear Harley jacket. 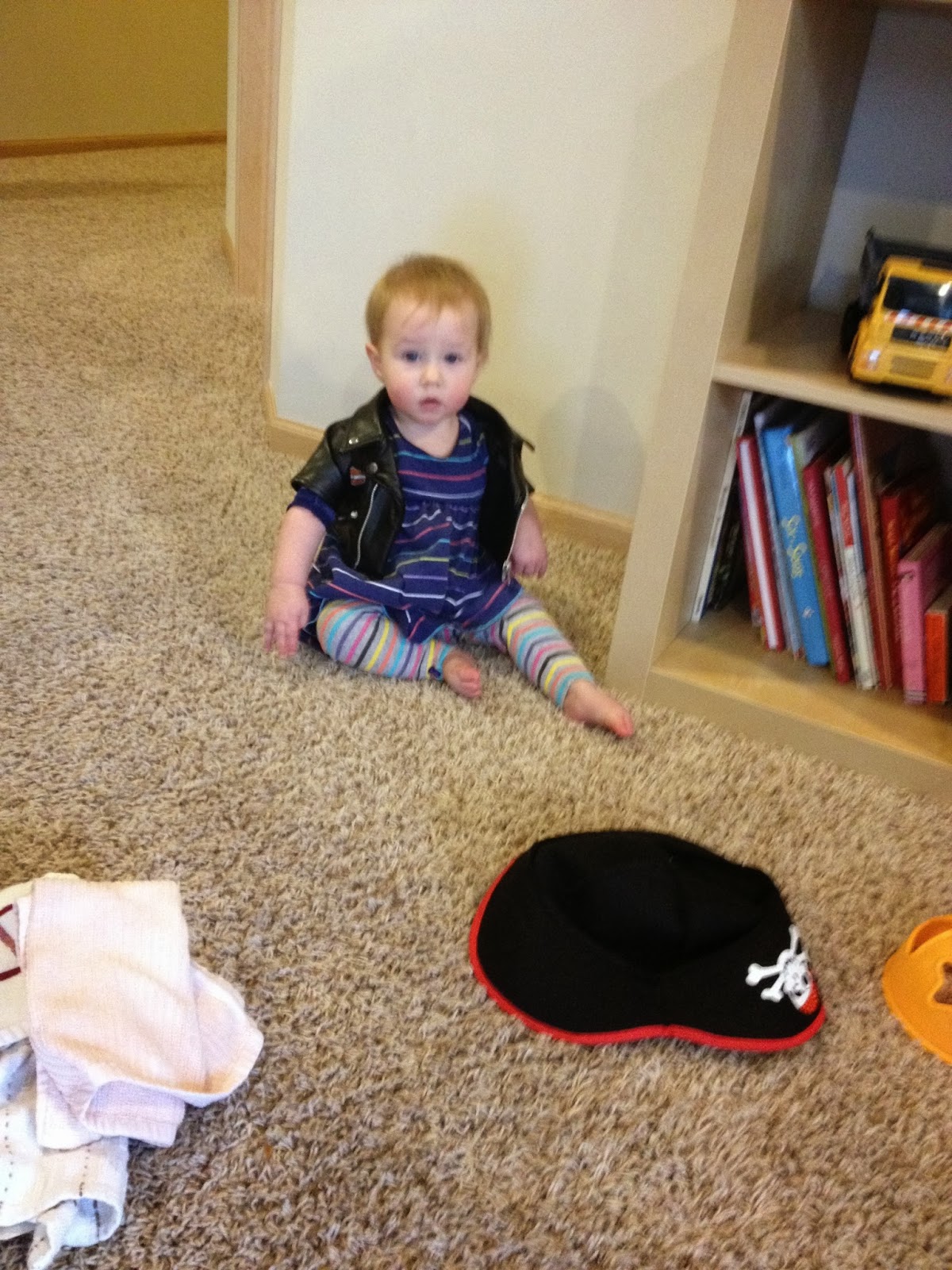 She dressed herself in cottage cheese. 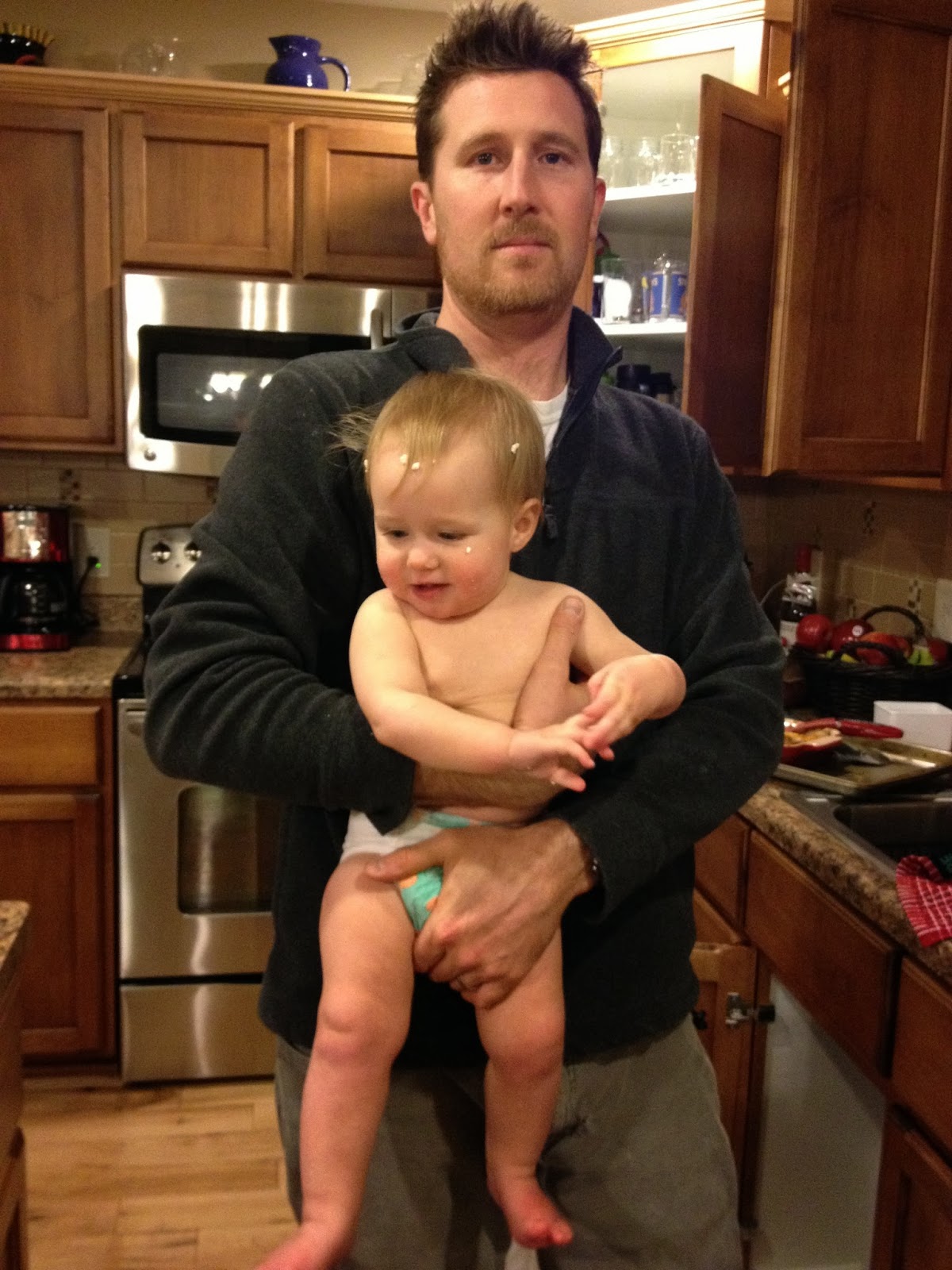 We went to my parents' house on Saturday for the day because my dad is in the hospital with pneumonia.  He's terribly sick, and we are very worried. Blowing snow caused blizzard conditions on the highway, so the trip took 4 hours each way.  After 8 screamy hours in the minivan, I can happily report that we have bought plane tickets for everyone for Disney, and I am not one bit nervous about it.

What an awful weekend and trip! I am so sorry to hear about your dad. I hope he is doing better as I write this. I'll be thinking about Harry too.

So sorry to hear about Harry's chest pains and your dad's illness.

So glad to see Dorothy looks fabulous in a biker jacket.

Oh jeez, Sarah, I"m sorry this was such an awful weekend (but the dogs in the pants is pretty hilarious). I hope your dad's on the mend soon--pneumonia can be so scary. My SIL had it several years ago and we were so worried, but she made a complete recovery & I'm sure your dad will, too. You'll be in my thoughts. How's Harry feeling?