I should be in bed because Ben and I were up for 2 hours cleaning up carrot puke (thanks a lot, HARRY) last night, but I am pretty sure Dorothy is going to wake up any second, so I don't want to get too comfortable with my Jane Green novel.  Ben is already in bed, meaning I have once again been doing some late night shopping.  This is on its way among other things.  How could I resist?  Her name is Dorothy, after all, and she already has red ballet slippers and she has outgrown her 6-12 month dresses.  My hands were tied really.

I am so tired of not losing weight, but not tired enough to DO anything about it, apparently.  Seems like no segue, right?  But I swear I can feel my wedding ring getting tighter by the second from my salty steak taco and beer dinner, so I guess it was more of an internal transition.

It was 40 degrees almost here, which was a heatwave.  I wore rain boots and a fleece.  I took everyone but sickie Harry on a puddle-jumping walk, even.  See? 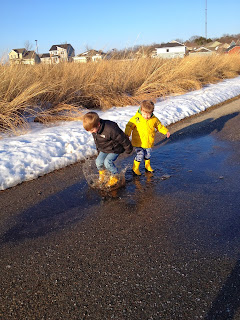 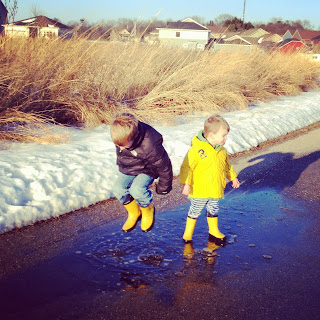 Ben took Cooper to ice skating today and got pictures that are cuter than a kitten Tumblr.
He's so shy he needed to bring his paci along.  Sometimes he needs it at Kindermusik, too-- I can relate because Kindermusik is also WAY outside my comfort zone 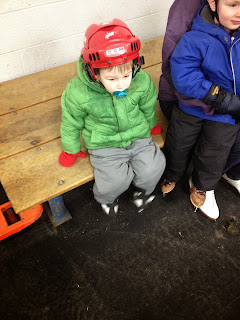 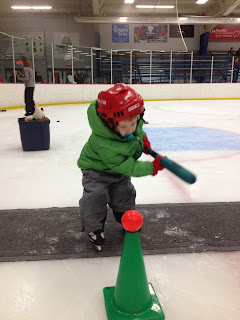 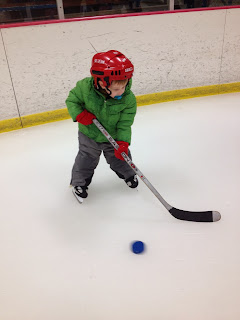 Okay, I cannot get over Cooper on the ice with his paci, and I spontaneously ovulated over that picture of the blue checked dress for Dorothy.

I cannot tell you how clearly I remember that feeling of "he's going to be awake any second now, so no point in going to sleep." Its lucky for me I hadn't yet discovered the ease of online shopping at that point.

The blue dress! Yes, you really had no choice. Adorable.

I LOVE that puddle jumping picture! Yay for the "heat wave"!