Calm before the storm

The grocery store today!  You guys!  IT WAS HORRIBLE.

First we went to Whole Foods, which is pretty cozy here, and we couldn't even park anywhere-- like seriously, we had to park on the curb behind the giant truck hauling away the last of the Christmas trees because there was a huge line of people waiting for spots.  We went inside anyway because we needed stuff, but we shouldn't have.  THEY WERE OUT OF BROWN SUGAR.  (Not totally true-- there was some for $11.98 a bag, but WTAF is THAT all about?).  THEY WERE OUT OF THE BROWN SUGAR I WILL BUY (which is annoyingly $6.99, but that is my limit).  I stood in the damn baking aisle trying to reach the tumeric for MINUTES while this oblivious asshole read all the ingredients on a bag of gluten-free flour and would not move (SPOILER ALERT DICKNOSE:  NO GLUTEN).  Jack kept jumping and falling down in the middle of the aisles, and Cooper flapped and screamed like a crazy person.  Dreamy.  Then we had to go to a normal store to buy Corona Light (a necessity) and Goldfish crackers for a Goldfish cracker buffet which is sure to be adorable and Pin-worthy (ha!), and I took the kids to the car while Ben stood in line for 30 minutes.  People are FREAKING OUT in advance of the storm.

Long story short, I am going to brave the subzero weather and go to Target tomorrow to fill in a few gaps.  Because I am hosting a ginormous playdate with wine (20 kids!) on Monday to stave off the break-extension-crazies.  No school Monday and maybe not Tuesday either because it is too darn cold.  Bah.

Harry is kind of a puzzle savant.  He did the whole frame with minimal help.  Harry, by the way, is so damn cute.  He told me tonight that his favorite time of the day is when we crawl under a blanket and read our books.  ME TOO.  He is reading a sci-fi trilogy that he borrowed from his teacher, and it;s the first fiction he has really connected with-- he is a staunch non-fiction/biography fan. 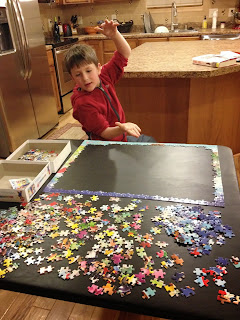 You know who isn't very helpful when you're trying to do a puzzle?  COOPER.  But he is actually freakishly good at puzzles, especially considering we have never done them with him-- we just threw a couple in his toy box and left him to his own devices.  Story of his life.  (He built a Lego car today.  WHAT.) 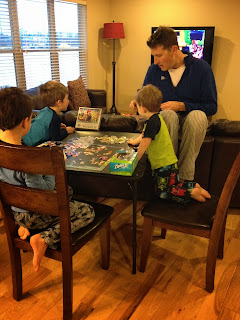 Tall enough to pull leaves off the plant, dumb enough to eat them. 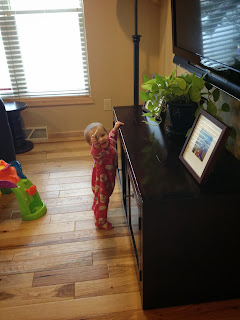 Harry and Jack tried out for a play today.  I'll keep you posted. 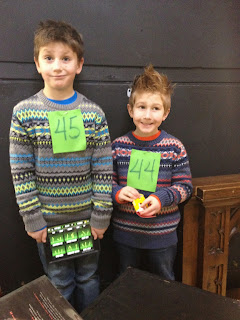 I have never endured Whole Foods during a snowpocalypse or polar vortex. I find them nearly insufferable and asshole/dicknose-filled on a regular day (although I do the majority of my shopping there anyway, to maintain my yuppie status).

I want to hear about that 20+ kid play date. That really does require a pitcher (or 4) of margaritas.