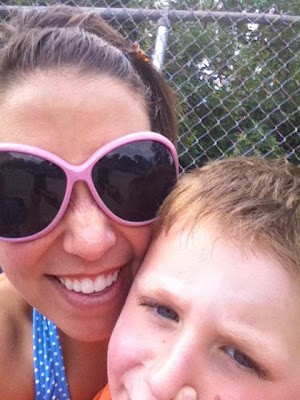 We had a bad time at the pool. 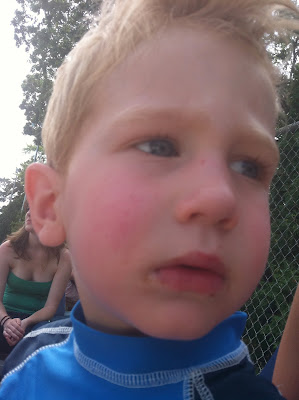 All because of some toys. 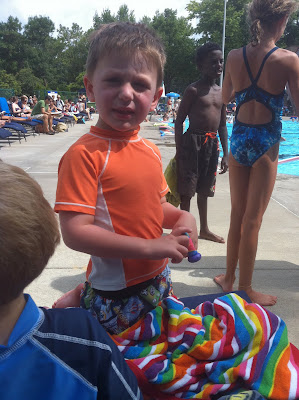 The other day, the baby brother of one of Harry's pool friends was gumming a water squirter that his mom left by the side of the pool when she took her kids home-- it wasn't their water squirter, just one of the communal baby pool toys. Harry gleefully played with it in the big pool, and Jack and I retaliated when he squirted us. Jack kicked and splashed and I stashed Jack on the side of the pool so I could throw Harry across the shallow end (he loves to be tossed all over the pool). Then I'd race back to the wall, and Jack would leap to me and kick his little legs until we reached Harry across the pool and the whole thing would start again. Super fun.

Yesterday, we brought our own water squirters, a pair of Buzz Lightyear ones that Harry scored for his birthday.

The game, though, just wasn't any fun. For one thing, the pool was a lot more crowded, and many moms gave us dirty looks as we played our squirty game-- which didn't make any sense to me because we were in the big pool. It's not like we were blasting babies. Maybe it's because we were playing with laser gun shaped toys? Second, Jack refused to stay stashed on the side, so I couldn't leave him for a moment to toss Harry (Harr'ys favorite part of the game). Third, Harry would not-- no matter how many times I asked-- stop squirting me in the face. In theory, I have nothing against getting squirted in the face. In fact, I get kind of pissy at people who don't like to be splashed in the POOL (and HATE the moms who sit near the fountain feature in the baby pool and give toddlers dirty looks for splashing them. They rival the moms who get pissy when kids dump buckets of water on the edges of the baby pool deck as the most annoying moms at the pool. Where there's WATER. To PLAY IN). The problem was that our water squirters are a bit more forceful than the one we played with the other day, so when he sprayed my face, I couldn't see, and Jack kept hurling himself off the edge of the pool into the water, and I missed catching him a couple of times because I couldn't see.

So, I said we had to put the water squirters away and play with balls or diving sticks instead.

Harry lost his shit. Screaming, punching, slapping himself in the head, pulling his hair, hitting Jack, biting me. Needless to say, we went home (I carried a silent Jack and all of our shit and Harry's shoes which I hoped he'd put on before we hit the blacktop parking lot) and Harry galloped screaming behind me. I had to hold his hand on the way to the car, and I was afraid he was going to twist his arm off. He kept screaming, "I'll be a good boy!" and I kept saying, "You are a good boy, Harry, but we have to go home now." I was out of breath after I wrestled him into his car seat.

He shrieked at the top of his lungs the whole way home. I made it within 2 blocks of our house when I couldn't take it anymore and screamed "SHUT UP!!" as loud as I could. MOTY. Also, it was totally ineffective. Effective? A snack (him) and a shower (me).

Of course we'll try again. And agin. And again. Every sunny day between now and September. The water squirters, though, won't be coming with us.
Posted by Sarah at 7:30 AM

nothing makes me feel worse than the days (few and far between thankfully) when I scream "shut up" at my kid. Better luck next time!

POOR HARRY! It sounds so sad! I kind of liked tantrums,tho, as long as they didn't happen real often!

I'm sorry, Sarah! I hope it's better next time!

I, for better or worse, have a child who hates to be splashed when he's in the water & ugh!! It makes me mental. His friends find him so annoying in the pool b/c he tells them to stop splashing him. Hello! You're in the POOL!! sigh.

Sister, I feel your pain. And don't you end up feeling really bad for Jack, who kinda got screwed and had to go home too? Those are the days when I long for another adult so I can just punish the one and let the other have fun.

And trust me, I have been there with the screaming and the wrestling them into carseats. Gooooood times.

OMG BEEN THERE. So many times.

I said "shut up" the other day. And also "What is the matter with you?" I'll see you at the MOTY ceremony.

So been there - but mine is more "STOP" than "Shut Up" these days. AJU5 some times just won't stop doing something that is annoying me, and I just snap. Luckily, kids will forgive us!