Pictures I would have posted when they happened, but I was too busy doing nothing at the pool

In the past week, we've had a visit from Ben's parents; we've hung out around our house; we've gone swimming a ton, and we've played a little tee-ball. And lucky for you, I have pictures of Harry and Jack doing most of those things.

Here they are riding the badger that adorns the world's ugliest fountain-- which happens to be right outside Ben's office window. lucky him. it's a dreamy view. 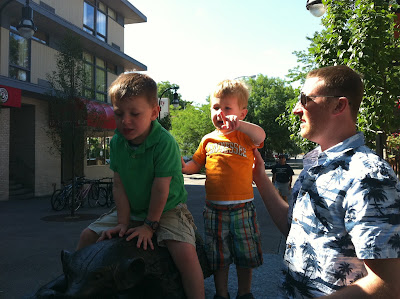 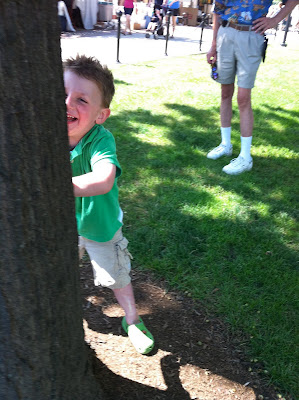 When we walked to the lake, Ben's dad gave him a boost on a really steep hill 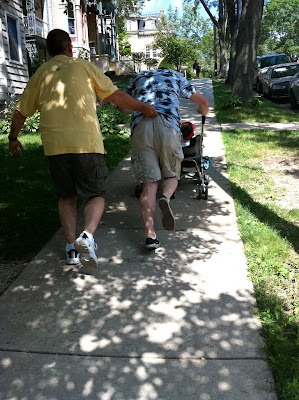 Harry and I went to the dentist, where we discovered that Harry's teeth are totally perfect as usual and that I have 3 (maybe 4, but the doctor won't know for sure until he starts drilling around in there-- yikes!) cavities between my top teeth. Probably from all the gum I used to chew until my appointment 6 months ago when they were like, "Dude-- you might have a ton of cavities up there. Stop chewing so much gum and we'll see you back in 6 months for X-rays." Also, Harry and I have always gone to the dentist together. He plays in the room while I get my teeth cleaned, and then he gets cleaned while I take pictures. At the end of our visit, our hygienist suggested that next time, we have our appointments simultaneously, meaning Harry gets to go into his very own exam room unsupervised-- so cool! 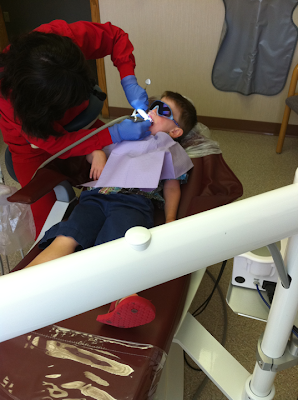 We played a mean game of Nerf darts. All of us got blasters, and we bought extra dart packs. I donned a mask because those jerks kept aiming for my face 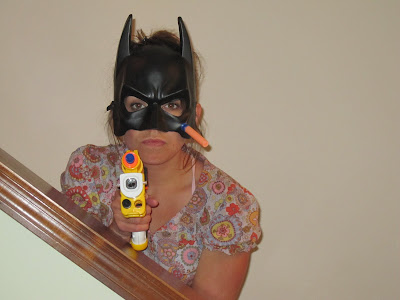 Clearly Ben was not messing around with extra ammo in his headband (headband-- wtf?) and a crib mattress and bean bag chair for protection 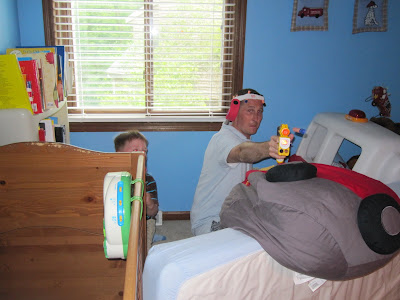 We misplaced Jack but discovered him in the tub (with a step stool-- wtf?) hoarding darts and reloading 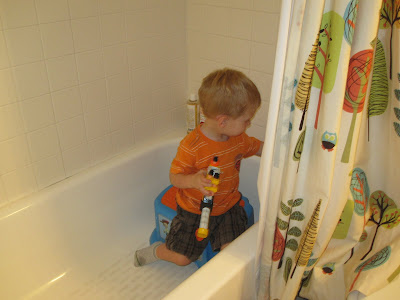 Jack wants to play tee-ball more than anything in the world. Last week, he even insisted upon wearing an extra team t-shirt, and he hung out by the fence, ready to dart on the field the moment he was called. He was never called. 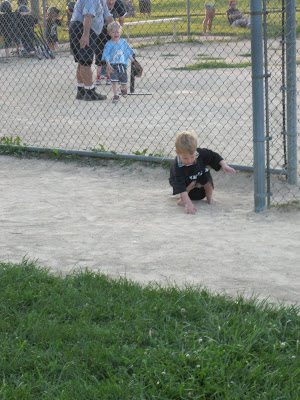 Harry is considerably less fond of the sport, but I love his bobble-head batting helmet. 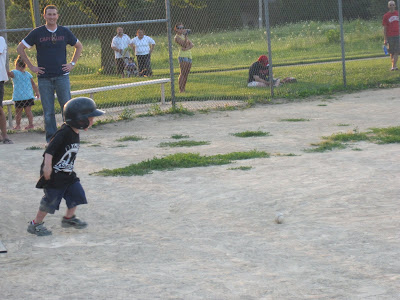 zOMG, I am dying laughing at those dart pictures! You rock that mask!

We are "those" people who don't want anything that looks remotely like a gun in our repertoire of play, but honestly? That looks like so much freaking fun, we may have to ditch that rule. I LOVE that Jack was locking & loading under cover of the shower curtain. Smart little monkey!