Jack has officially turned into Scooby Do, don't let this picture of him in a Buzz suit with a beer gut fool you. 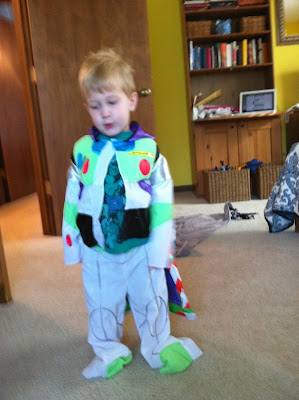 Yesterday, he and Harry showed Jamie the hidden going-away present we got her, and when they told me that they spilled the beans, I was all, "Oh crap you guys. That's not cool," and Jack said "I rorry." Then I asked him if he knew what my name was besides Mommy, and he said "Rarah." Cracked. Me. Up. 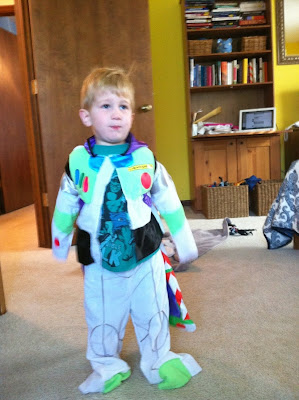 I love this next picture because he is so bossy these days, telling us to follow him "Mommy here!" or "Daddy there!," or "Me up!" or most often "Me Harry too!" I also like how strawberry his hair looks and how messy it is in the back, a sign he needs another traumatic hair cut, I guess. 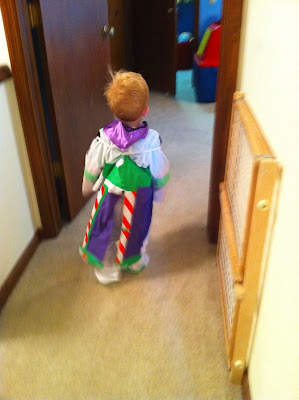 I helped Harry put this costume on beause it Velcros in the back, but sometimes he dons easier-to-fasten costumes by himself and I come into a room and happen upon him in super hero gear and a mask and am alarmed Today, I was ready. 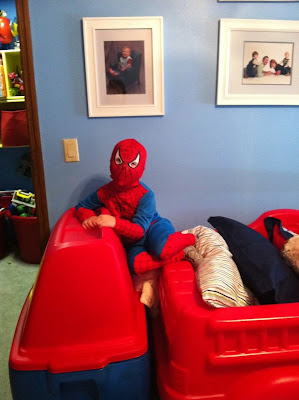 Shortly after jack clambered onto the bed (his bed, mind you) Harry freaked out and tried to throw him to the ground for daring to trespass (on his own bed), and we were all done taking pictures. 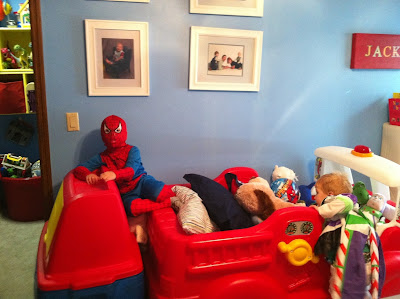 Both boys have had a hard time keeping their shit together lately because Jamie is leaving for grad school, um, TODAY, and they are not sure how to handle it. I scoured the Internet and could not find a single freaking book about a kid whose beloved nanny moves away (which is dumber than dumb because surely this has happened a million times to a million other sad kids). Jack has been especially awful (and he can't tell us about his feelings as well as Harry can-- even if Harry is the kind of denial and will look up from whatever totally jerky thing he is doing to yell apropos of god knows what is going on in his little head "I am going to be FINE when Jamie leaves. Just FINE!), and I finally told him that Ben and I aren't going anywhere, that we're his mom and dad forever, and he stopped tearing the legs off of super heroes and hugged me and clapped his fat hands and said "Yay!"

It makes sense that he'd worry about us leaving, too, considering Jamie has been taking care of him like a third parent since he was born. Poor kid. Thank goodness for Skype. And winter break.

Really, we're all very sad, and I am dealing with it by being a bigger bitch than usual and buying shit. Like cupcakes. Did you know there's a cupcakery right by my office? Well, there is. Soon, I will have to buy other things. Like new pants to accommodate my cupcaked ass.

Oh, poor kiddos! And poor you. That's what you get for being such a good role model for young women.

I'm already attached to our sitter and we only had her for the summer. And she's going to the school where I teach in the fall, but will probably be too busy to work. And I have no clue what I'm going to do for August.

I'm so sorry Jamie is leaving and the boys are sad!

What about making your own book for the boys? Maybe Jamie could send some stuff from her new home for pictures and such? I haven't ever tried making our own book, but I read about it somewhere as a way to help teach a kid about going to bed on their own.

((((((((((((((((hugs))))))))))) to you and the boys. That makes me sad! I like Kim's idea of making a book; do you have pictures of her with the boys that you can put together on Shutterfly or Snapfish or something like that? I made a scrapbook for Ethan of all his friends in Virginia when we moved out west.