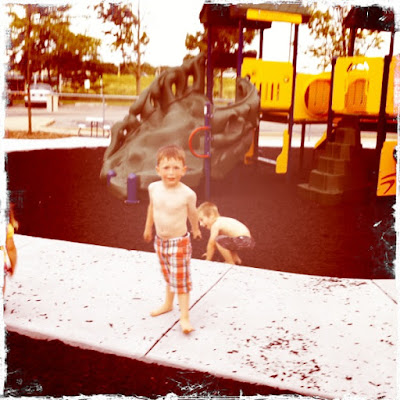 Sometimes I forget that my little boys are babies still.

Last weekend, they found a jack-in-the-box lurking on the top shelf of their closet and demanded that Ben get it down. He was skeptical at first, asking, "What do you guys want that old thing for?" "To play," Harry responded flatly. "Me, too!" chorused Jack. Ben set it in front of them, and they stayed, cross-legged on the floor, facing each other with their knees touching, winding the crank, bobbing their heads to the music, clapping in delight when the jack sprung out, and stuffing him back in the box to start the process again, for at least 20 minutes. 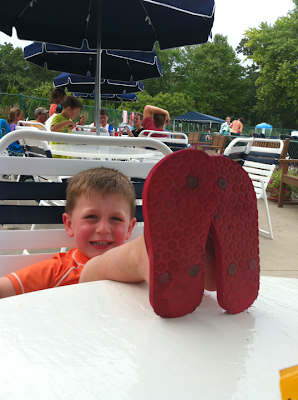 Just now, Harry and I watched El Tigre on Nick Toons while I washed the floor and Jack napped (in his actual bed-- score!). "Geez, Harry," I said. "Do you think Manny is going to save the day?"

He watched the screen intently, looking kind of nervous. "I don't know," he said. "There's a lot of bad guys."

But the hero always saves the day on kiddie TV, I wanted to tell him but didn't. 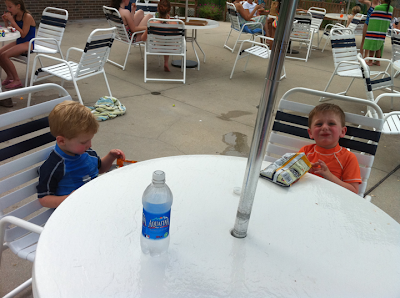 Speaking of the big boy bed. Jack has been making himself a floor nest after tuck-in and sleeping there until Ben and I come to bed, laugh at him, post his picture on Facebook, and scoop him back onto his bed. 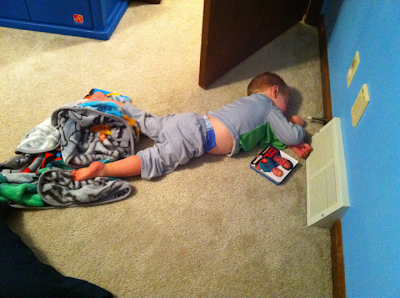 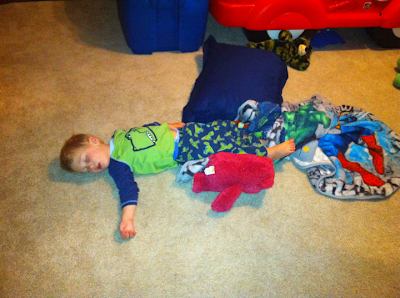 He sleeps great, though, so we can't complain. We have also discovered the secret to sleeping past 6:30 am. Harry, who has never once peed his bed (and now that I wrote that, he so totally will), was waking up before five screaming that he was wet. This, understandably, woke up his roomie and us, especially when both kids insisted on breakfasting at 5:15. And? Harry wasn't even wet-- he just really needed to pee. A couple of times, he woke up and ran to the toilet before 5, but the clanging of the lid woke the whole house, too. We cut out all liquids after dinner, and still, the pre-dawn pee-fears continued. Finally, Ben and I started taking him to the potty before we go to bed-- we carry him into the bathroom and sort of half-wake him; he pees, and we carry him back to bed. Easy peasy (also kind of funny). Long story short-- we're already stopping by the boys' room to take zombie Harry to the bathroom, so plopping Jack back in bed is convenient, really.

they are so cute; it is hard to remember how little they are because they do look like little men. love them!

Once we couldn't find Charlie but we could hear him snoring. Heh heh. He was under his bed. Love the sleeping on the floor pics!

my jack makes a floor nest alot of nights too - unfortunately he does it directly behind the door, so if I try to peek in at him (or see if the cat is locked in there) I thump him in the head opening the door and wake him up.

I was so surprised when AJU5 actually stayed in her bed when we transitioned to the bunk beds - maybe because she had "treasures" in bed with her...

We have also been surprised at what she wants to play with. Things we think will be boring often aren't, which is probably a good thing :)