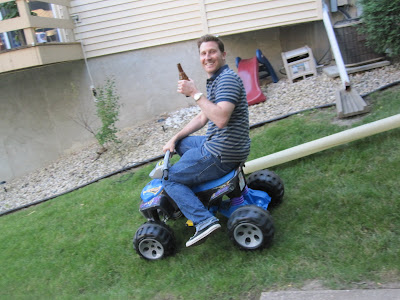 We had our college friends Eric and Jaime, who are expecting their first child-- a little girl--next month, over for dinner and fireworks on Friday. it was so much fun to catch up with them and talk about baby stuff (baby fever much?), and Harry and Jack had an excellent time showing off.

They dug out all of their favorite toys 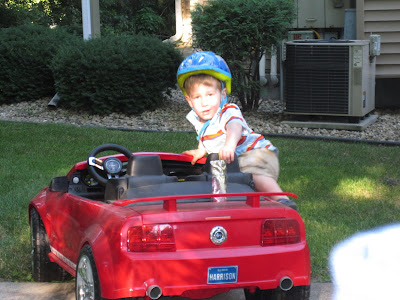 In fact, we had so much crap on the lawn that when we went inside to eat, it looked as though we had been raptured up. 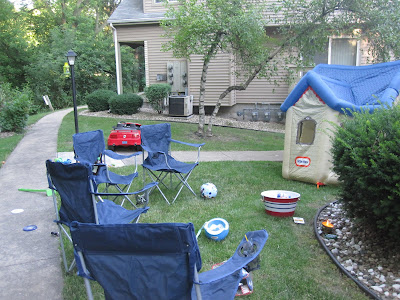 After dinner, Jack came outside and experienced his first s'mores. Clearly they were extreme. 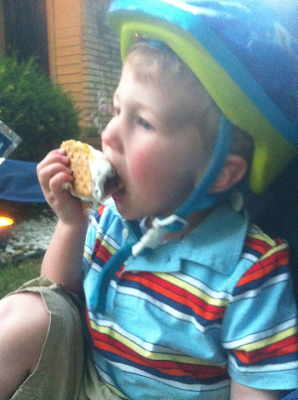 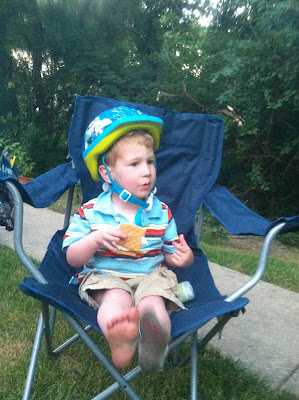 When it got dark enough, we walked toward the park down the street which, conveniently, is where our city hosts one of its fireworks shows of the weekend (the other is in a park on the complete opposite side of town, and we have yet to check it out). About a block from our house, on a grassy expanse of empty space, Ben abruptly tossed down his lawn chairs and blankets and declared that he had staked out the perfect spot. We watch hoards of people stream toward the park down the street and looked at Ben like he was crazy.

Sure enough, though, we had excellelnt seats with perfect views, and by the time the show started, a bunch of people set up camp in the grass behind us. 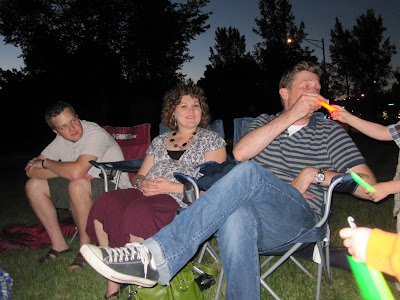 I adore this picture of jack because this is exactly how he sits on our bed to listen to his night time stories, only instead of glowsticks, he holds his toothbrush. 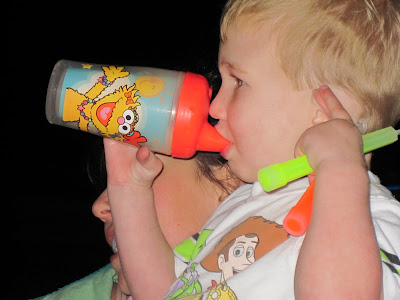 Harry loved the show too and even stopped trying to direct traffic with his glowsticks to watch for a few minutes. 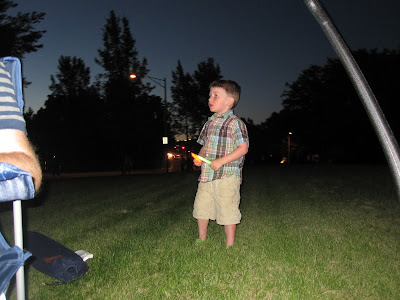 Both kids stayed up until almost midnight (because they needed baths after the fireworks to wash the yard and bug spray off of their bodies), and they were good as gold. And woke up at 5:55 the next morning, FAIL.
Posted by Sarah at 6:50 AM

Charlie stayed up until ten on the Fourth, woke up around seven, then slept through lunch at the Cotton Patch Cafe slumped over my shoulder like I was rescuing him from a burning building. I can only imagine what six hours of sleep would do to a preschooler.

Looks like a great night!! I love how much stuff you got out in the yard!

"It looked like we had been raptured up." HAAAAAAAAAAAAAAAA! The southerner in me truly appreciated that.

Add another vote to the hilarity of a rapture joke. Maybe next year I'll borrow some kids for a fireworks show. I feel like a tool going alone, but they're so fun and patriotic. :)

I LOVE the "raptured up" line! SO funny!