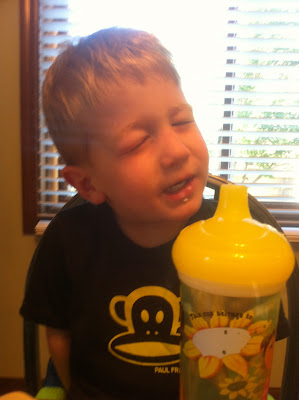 The day after the fireworks, Jack woke up with one eye swollen shut.

In our usual cool and collected style, Ben and I freaked. I mean, look at the kid! he was like a baby Quasimodo. 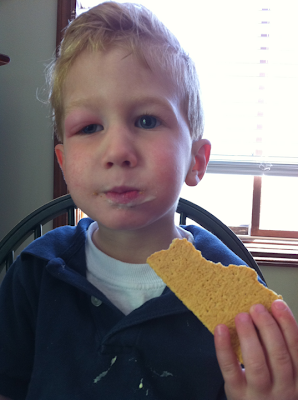 The pediatrician on-call at our HMO's urgent care clinic had no clue what was wrong. He said it could be the beginning of a stye (ew!) or a bug bite. He didn't actually think bug bite, though, because there was no evidence of a bite anywhere. 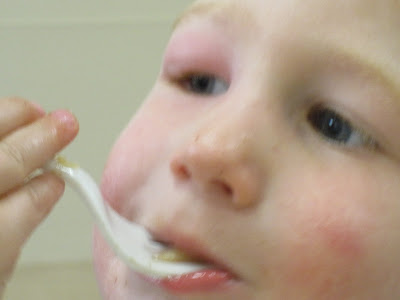 Jack was happy enough, stopping only occasionally to rub his face on the carpet or on a blanket or up against my leg and say "Ow. Eye. Me eye. Ow." Then he'd get worried that we were going to treat his owie in some way, so he'd shake his head and hold up an index finger and totally contradict himself. "No ow," he'd assure us earnestly. "No ow. Me eye. Ow no ow." 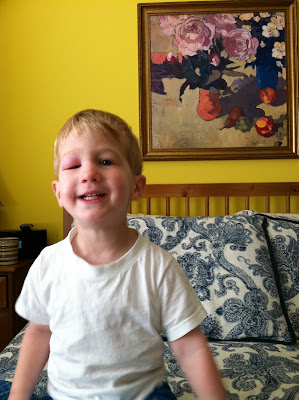 Clearly, he woke up worse on the 4th. We tried to make him keep some ice on it, and we gave him ibuprofen for the swelling. After nap, there was marginal improvement, and by Monday, he was good to go.

As the swelling went down, we noticed a teeny bite right near the outer corner of his lid, next to the lash line. It looked more spider than mosquito, which means he probably got it in bed-- which makes sense since he went down fine and woke up maimed. EEEEEEEEW.
Posted by Sarah at 6:01 AM

That happened to me once in junior high. It was a bug bite of some sort too. Needless to say, I was traumatized and refused to leave the house until the swelling was down.

Junior high is a rough time.

Don't you love the mystery ailments?

EEEEEEP!! I hate thinking about critters in my bed. (Why does that sound so wrong?) Nathan's woken up with a bite or two as well, but thankfully hasn't swollen up like poor Jack! I'm glad the little man is on the mend.

Let's never speak of this again. Just thinking of spiders in cribs makes me want to run up and throw all the lights on in Emmie's room!

We live in black widow territory. I've found 3-4 of them in our garage since moving here. I will sleep with the lights on tonight.

Okay, I know you wrote this several weeks ago but could he possibly have an ear infection? One of my little guys woke up with a swollen eye at age one and I didn't think too much about it, just took him to the pediatrician; the poor tyke had mastoiditis! Who even gets that?!?!?! He was okay after some serious antibiotics but I felt awful for missing it- I'm usually a total hypochondriac.