Seriously. It is so easy to just snap a picture with my phone and slap it up on facebook-- who needs a blog?

I took a picture of my dissertation wearing its new cover page and looking all official-like, and I got a million well-wishes in like 5 minutes. And then I felt a bit fraudulent because I still need a bibliography; I haven't defended it yet, and my advisor may still "suggest" a few more revisions before it goes to committee this week. THIS COMING WEEK! And then it will no longer be my problem. Until Monday May 11th at 1:30 pm. Then it's my problem in a big, bad, scary way because that's my defense.

So, instead of thinking about my pesky old defense, I have been thinking about graduation! (A bit of the cart before the horse, and I would so be the cute little animal who gets totally screwed in the end, were my life an Aesop fable illustrated by Eric Carle, but it's not, so I will continue to scour Banana, J Crew, and Ann Taylor for something to wear under my regalia.) Because I am speaking, we get parking passes and my fam gets special seating. I get to sit on the stage and be introduced by the chancellor, which is totally exciting for me-- I have been geeking out about the whole thing for the last week. It's really fun to have a speech to practice in the shower again (washed-up much?).

Okay-- here are some phone pics:


Jack tried ravioli. Sans bib. Because I am an idiot. Speaking of me being an idiot, his pants were all wet when I picked him up from the gym playroom today, but his diaper was inexplicably dry. Because his penis was sticking out the leg of his Pamper. This is the second time this has happened. This week. 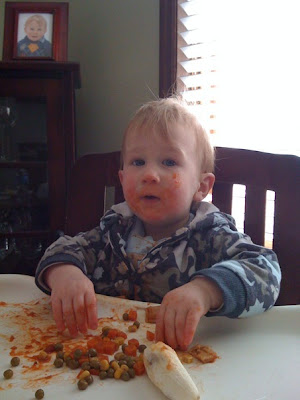 Last weekend, Harry and I breakfasted pre-Little Gym with an assortment of trucks. 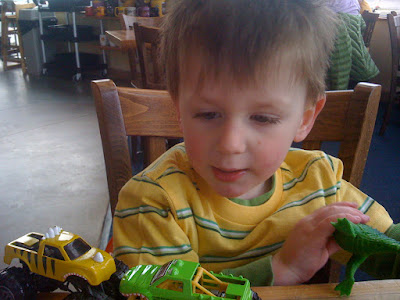 As you can see, Harry enjoyed enough unsupervised Harry time to climb into the infant-sized changing table on the Pack n Play and play with some nail clippers. Mother. Of. The. Year. 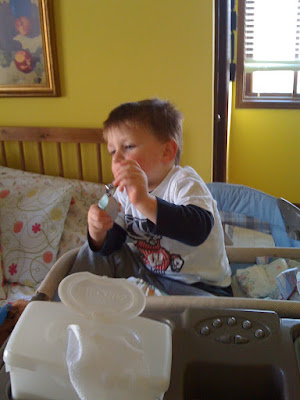 I needed to buy a shirt to wear under my black pants suit (which I have not worn since before I had Harry-ha!) for the graduation speaker audition. I went to 3 potential shirt stores (and successfully shopped for shoes and hit up Sephora) with both kids by bribing them with a visit to the Easter Bunny. After we saw the big guy, Harry very seriously wore his souveneir bunny ears, and Jack immediately ate his. 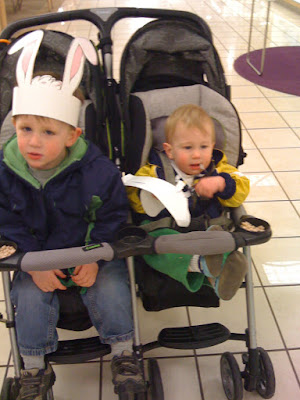 Harry spends a good 65% of his day "playing guys." 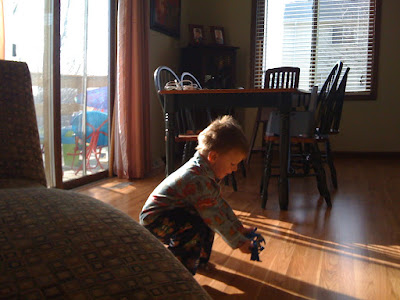 A majority of Jack's time is spent trashing rooms and eating small parts. 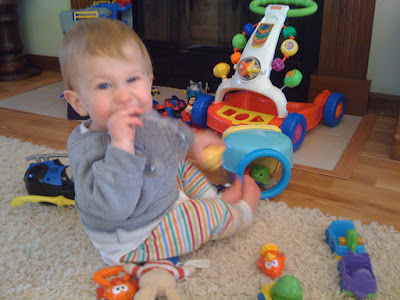 Harry and I went to see Monsters Vs. Aliens yesterday and loved it. I spilled my Junior Mints all over the floor, but Harry masterfully handled his slushy and popcorn. I also fell asleep for a good 25 minutes in the middle of the movie, but Harry was entertained the whole time. And I hit the iPod icon on my phone by accident and played Love Shack really loud and had to run out of the theater to figure out how to turn it off. Harry was quiet and stayed in his seat. Can't take me anywhere, I guess.
Posted by Sarah at 1:45 PM

And I couldn't agree with you more about the FB vs. Blog issue. It's definitely more of an effort to select pictures to upload, not to mention write something as well (though yours are always entertaining) rather than snap a pic with the phone and send it to the 'mobile uploads' album and call it a day.

You aren't an idiot for no bib - AJU5 can take them off so we don't do them either!

Was Harry upset at your actions at the movie? I would just be happy that it was during a kids' movie so people were expecting SOME distractions!

I've been to Ann Taylor and Black/White and Banana outlets and had NO LUCK. So frustrating. I guess Wes and I will be hitting the real versions of these stores this week because I am afraid I will end up sobbing at TJ Maxx the night before graduation like usually happens before special occasions. Your speech is unbelievable! I am so jealous you get to sit on the stage! Congratulations!

I'm just laughing at all of it. You always crack me up.