Untitled from sarah on Vimeo.

Then we took a shower.

****
As soon as I posted that nothing was going on in our lives, a few things happened.

First of all, I auditioned to be the spring commencement speaker for the grad school's graduation ceremony. AND I GOT IT. I am super excited, and I wrote a cute little speech-- and in my speech, the first 2 people I quote are Harry Truman and a guy named Jack-- Harry and Jack-- perfect, huh?

Second, Jack is almost walking-- he can walk holding onto just one of our hands, and he pushes a kitchen chair around the main floor (instead of using his little Fisher Price push toy, of course, because clearly that thing is just fireplace decoration). He stands all by himself for extended periods of time, and he can get from the ground to a standing position without help. He is scared, however, to take that first step. Which? Totally fine with us because he is already hell on wheels, you know?

Third, I had to call 9-1-1 on Friday afternoon, and I totally hyper ventilated. I had a babysitter so I could work on my end notes from hell, and I stopped at Target on my way home to buy diapers, wipes, formula, organic smiley face crackers-- you know, essentials. At the checkout line, I saw the Barbie Swan Lake DVD that Harry keeps seeing commercials for on Nick Jr. and really wants to see, so I tossed it in my cart. When I got home, I left the movie in the trunk because I thought maybe the Easter Bunny could bring the movie next weekend, thus decreasing the total number of hours of my life I would have to spend watching it. But Harry asked me so sweetly if I brought him anything that I said, "Yes, actually, I did," and I suggested he come downstairs with me to walk the babysitter out, so we could get the surprise out of my car. I carried Jack on my hip but told Harry to wait in the laundry room because he was barefoot, and Jack and I escorted the babysitter into the garage. We said goodbye to her, and I had just taken the movie out of its hiding spot underneath my behemoth stroller when I heard the "click" of the deadbolt sliding into place, locking the door that separates the laundry room from the garage. I tried to flag down the babysitter to use her phone, but she thought I was was just jogging after her car to wave, and she waved back at us enthusiastically. Harry was starting to scream for me to open the door, so I tried to talk him through it, but he was too upset. I think I was getting pretty hysterical at this point because I realized that WE DON'T HAVE A KEY TO THAT LOCK and that THE CHAIN WAS ON THE FRONT DOOR and also that BEN HAD A MEETING AND WAS WORKING LATE and MY PHONE WAS IN THE HOUSE! IN THE HOUSE! IN THE HOUSE WHERE MY 2 YEAR OLD WAS STUCK ALL BY HIMSELF SCREAMING AND SCARED AND WITH FREE ACCESS TO EVERYTHING SHARP AND POISONOUS . I tried to talk to Harry again, but my voice was coming out all strange, which made Jack keen and breathe heavily himself. I ran next door and rang the bell and pounded on their door, but even though our neighbors' cars were in the driveway, they didn't answer, so screw them, and they are totally always getting snow thrown on their driveway (and since it's still snowing here, my revenge can start NOW). I ran back to the driveway, bouncing Jack all around and just yelled "Help!" which totally freaked Harry out, and he screamed even louder from behind the door. Thank god a woman who lives two doors down was leaving for work-- she called 911 and stood by the door listening to Harry and did a good job of ignoring my repeated suggestions that we just break a window. "He's right here," she kept telling me. "We know he's okay." Before the fire truck showed up, Harry managed to unlock the door, and he tumbled into the garage in a cloud of tears and snot. He was completely fine as soon as he saw the DVD I was white-knuckling. "Oh," he said. "The Barbie ballet movie. Thank you for getting that to me. Oh! A unicorn! That looks interesting." Our lovely neighbor hung around for a few minutes, which confused me until I realized that my chest was burning and I thought I might pass out. Sometime after Ben got home, I finally had my shit back together. Well, as together as it gets. But I kept coughing the rest of the night and having chest pains because I am SUPER DRAMATIC. 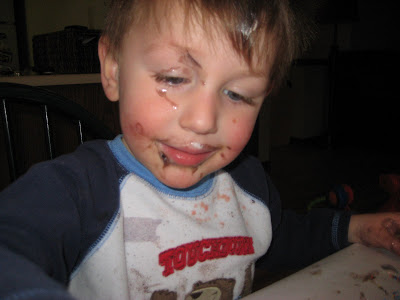 so hard his hands were blurry, 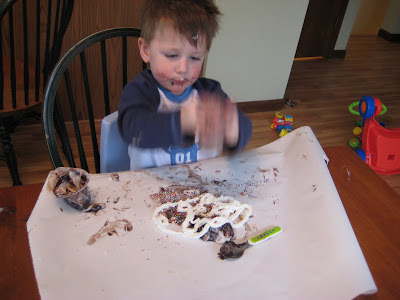 on his pudding masterpiece that he wanted to save it for the Easter Bunny. 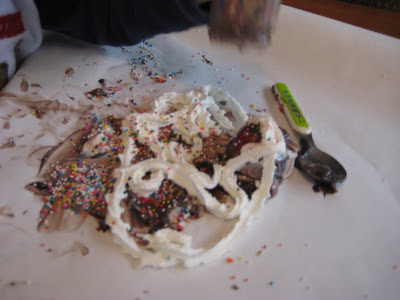 He is a great artist! I bet the Easter Bunny would love that dessert!

Thank goodness he opened the door. His admiration for firemen would have changed for sure! Awesome pudding art!

Hahahaha! "Because I have to!" He is so cute and grown up.

The door thing? Terrifying. Glad it worked out and that you are feeling better.

That's so cute! I love how when Ben says,"Say 'bye to the camera," Harry says,"Bye, Grandma." Also? "My eyebrow is sticky."
I love that

AGGGHH! What trauma! I'm guessing being a paramedic would not be a good alternative if you burn out on teaching. Awesome vimeo tho - LOL! Harry is so cute and smart and changing so fast! Boo

bye grandma. oh my, i have been behind on your blog. i can't wait to finish catching up because this was hysterical!

A. BEST idea ever and I am totally stealing it tomorrow when it's 100 degrees outside and I just want to eat pudding (when don't I?)

B. He is so freaking cute I can't stand it. "My eyebrow is sticky" and the "camera/grandma" thing? I'm still laughing. thank you for making my night. seriously.