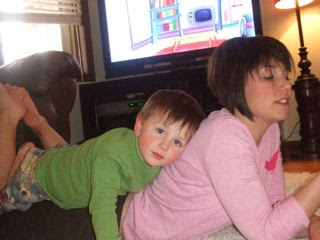 On the one hand? Awesome and hilarious. The other "morning" he woke up at 3:30 and trotted downstairs (where yes, we were still sleeping in our living room). Ben was like, "Dude, Harry. You can't come out of your room until the sun comes up." Harry looked at Ben, put his fat little hand on his hip, and said, "Dada. I don't think the sun is accurate."

On the other hand? Total pain in the ass. Constant bullying of his roly poly brother. Constantly querying "Where's my milk?" or "Can I have some more black bears on the couch?" (his name for Teddy Grahams). Constant demands to "watch tee-ee downstairs on the big tee-ee." And the tantrums. Oh, the tantrums. He also uses his Buzz Lightyear laser all the time (Note: this is not a real laser. He crooks his arm like Buzz in the Toy Story movies and pushes an invisible button while screaming "Dooodododododoooooo." It's more annoying than I can articulate.) At Little Gym last week, I said, "Harry, we don't laser our friends." Then I felt like a ginormous douche bag for saying something like that out loud.

Then there's this guy. 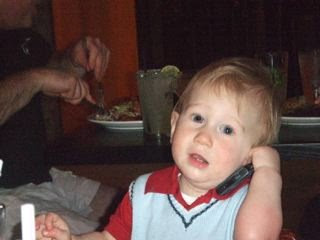 He has a mad crush on phones these days and clamors to talk whenever one rings. He is also talking more, and he has a really deep voice for a baby. He says Harry, Jack, Dada, no, yeah, baba, night night, ball, book, down-- but NOT MAMA. He is also still sleeping in the master bedroom. All by himself.

He hates to have his diaper changed but loves a good poop, and he is a voracious reader (Seriously. He tears books UP).

It's funny because all of our friends keep asking us if we're going to have another baby soon, which is not an odd question considering I got pregnant with Jack right around Harry's first birthday. But, um. NO FREAKING WAY. Maybe in like 3 or 4 years. But that's a huge maybe.

You may be asking yourself Sarah, what the hell? Does your post have a point? The short answer: No. The long answer: No. No it sure doesn't.

Oh! I finally bought a graduation dress. It's nothing special, but it does have my two favorite characteristics: it fits me in a stupid small size, and it was on sale. What it looks like is totally immaterial.

OH MY GOSH! My little brother Jon just called me, and he is speaking at his law school commencement!! How cool is that?? Yay Jon!
Posted by Sarah at 3:11 PM

Gosh, no wonder you guys want to move! No more sleeping on the couch! Yeah, so it's good to have a cute little one who still loves you unconditionally and has not yet learned to whine, isn't it? Because it puts the other one's appalling behavior into context.

I think it is so cool that you guys are both speaking! It will certainly make the ceremonies more interesting to me!
I am thrilled!

I think that laser-ing the other kids is kind of funny... especially when they have no clue what is going on@
Oh, and Jack will talk to PEOPLE on the phone? AJU5 talks when no one is there like crazy, but as soon as there is someone talking back is won't say a word!