For Jack's birthday dinner, we went to a local favorite place that specializes in birthdays-- the same place where we had Harry's 2nd B-day party. Only instead of going to the restaurant in the burbs like we did for Harry, we went to the one by campus tonight. I had colloquium and then Ben brought the boys downtown and we met at the restaurant, which is 2 blocks from my office. Would have been as perfect as it sounds, but there was some sort of sporting event, and the places was P A C K E D. We waited for an hour, but the kids were so good. Unbelievably. Ben bribed them with pieces of cheese he had in pockets, which was weird but effective.
Jack really didn't mind the wait-- he made googly eyes at a lot of people in the bar. 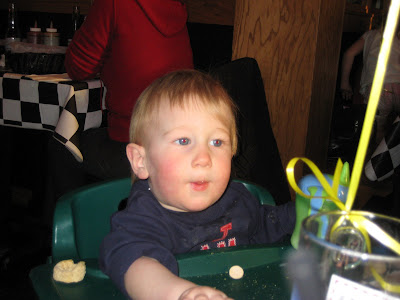 Harry was pretty affable when we finally sat down 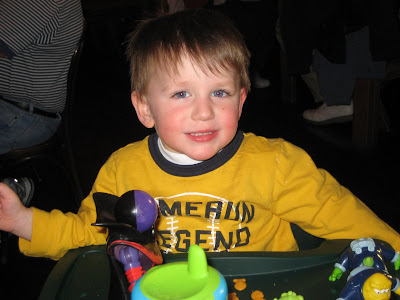 When Harry's teeny ice cream sundae arrived, he carefully removed the whipped cream then attacked it with a spoon. 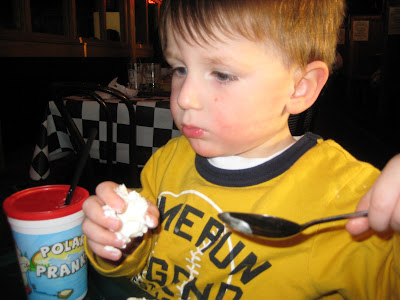 Jack sampled his sundae with one tentative finger 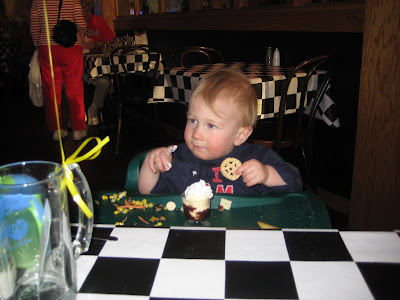 Then he dove right in, much to the delight of everyone seated within 3 tables of us-- Jack was a big hit with his fellow diners tonight, which made Harry a little hot under the collar. 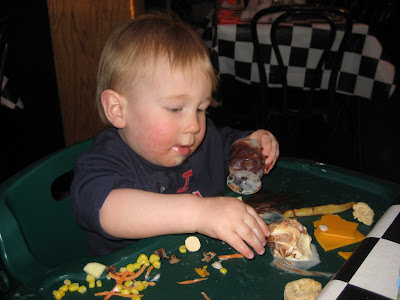 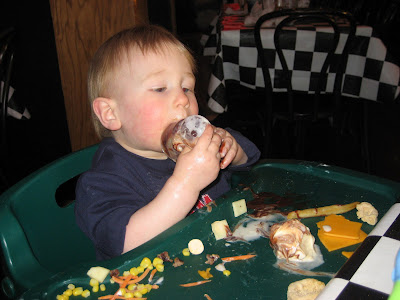 Harry declining our request to smile 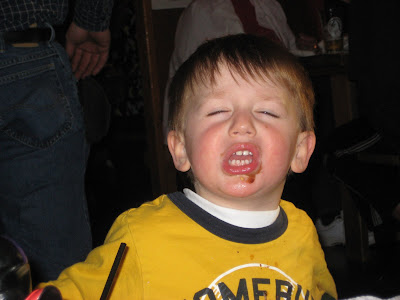 Jack tried to put his head in a to go box 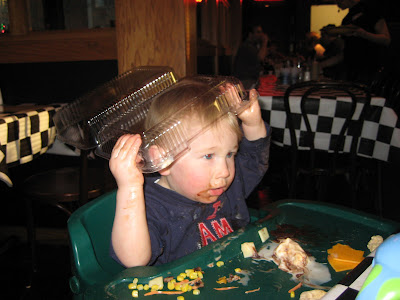 This is his only bottle of the day now-- I think he'd happily trade it for a sippy, but a sippy just isn't as cute. 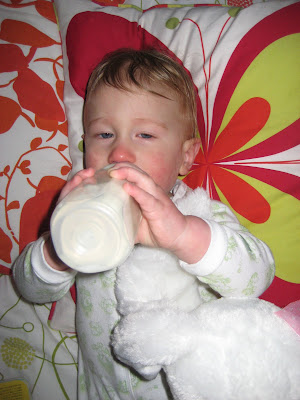 And now a prolonged clip of Jack eating his ice cream

Untitled from sarah on Vimeo.
Yes, Ben totally picked it up and gave it back to him. Yum.
Posted by Sarah at 11:48 PM

Mmm, looks like the ice cream was a hit.

I laughed out loud at the "little pieces of cheese in his pocket" part. Awesome.

Jack looks so sleepy with that bottle! And so cute of course :)

Looks like a fun place to eat! I love the places that are used to messes because, well, little ones are not neat eaters!

Man , they are sooooo cute! Did you hear how loud, but not understandable the restaurant was on the video? It made me think about how it feels to be Jack. There's all that noise, and sometimes you pick up a few words you know....But you are just not vcertain where to focus...