I made to class on the first day! On time!

It's the first day of the new semester, and all my stuff is photocopied, and my lecture is ready to go, and I have done 45 minutes worth of administrative tasks, and I STILL have 16 minutes before my class!

I don't look awesome because I used my eye shadow crease color under my brow and then tried to highlight on top of it, and things kind of escalated from there.  And also I have acupuncture today and no time to change before it, so I had to wear loose acupuncture clothes.  But!  ON TIME, baby!

And!  The house it totally tidy (although I did not wipe down the 2 upstairs bathrooms or sweep the kitchen floor).  The kids left happily with all of their winter gear.  I worked out for 42 minutes (which is how long it took me to break 3 miles because I TRUDGE in the morning), and I have already had 28 oz of water.

On the downside, though, it took longer to drive to campus than I was anticipating, so I have to up my game before my adjunct class on Friday that's EVEN EARLIER.  Also!  It took me 20 minutes to leave the house after the kids left for school even though all I had to do was throw on the outfit I had mentally assembled.  Turns out, I need to PHYSICALLY assemble the outfit, including boot socks (never easy to find) and jewelry (always in a snarl).  I also need to START MY CAR because holy shit it's cold outside, and I used the windshield wiper fluid to clear a little frost and then had to pull over on a side street until defrost warmed up because my whole windshield was instantly frozen over with a beautiful but totally opaque sheet of snowflake-patterned ice.  THAT'S WHAT ELSA MUST FEEL LIKE.  I also need to get my coat, scarf, and gloves ready the night before and probably my work bag, too.  Like I do for the kids. 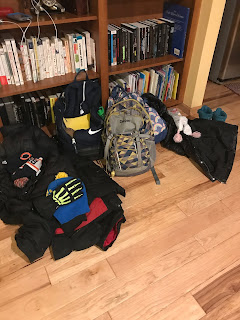 On his way out the door, Harry goes, in the general direction of Jack;s phone, "Siri, call me sir."  And Jack's phone said in a British accent, "Okay, Sir, but I already call you sir."  And then I died laughing.

Here is Jack downloading a toothbrushing app, which he swears will help him remember to brush his teeth,  CROSS YOUR FINGERS.  Also, I outsource my memory to my smartphone, too. 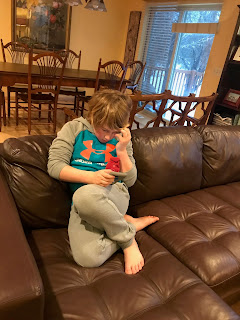