Nose Job-- it's actually a terrible sweet 16 gift, if you ask me

I left Ben's surgery totally bummed out because the whole ordeal was so freaking terrible, I know I'll never get my spider veins fixed or have those giant boobs I've always wanted or even let someone suck out my saddlebags.

When I went out to the (super plush) waiting room, I said good bye to this guy: 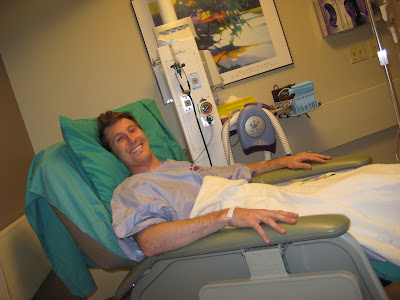 And I came back to this guy: 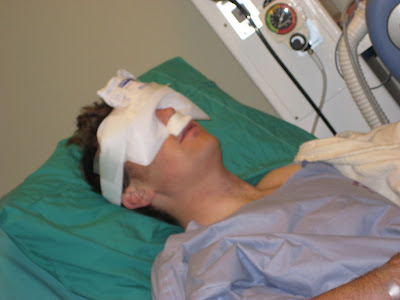 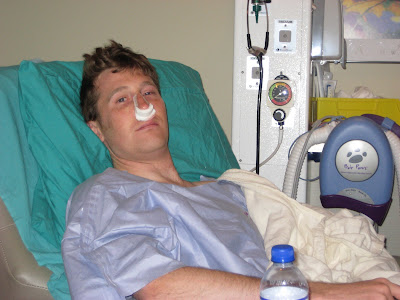 It just sucked, you guys. His face hurt. The percocet made him feel creepy. The ice hurt his nose, but NOT having ice hurt worse. The antibiotics destroyed his stomach. Ibuprofen was not enough to keep the pain at bay, but percocet just made him want to lay in a dim room and whimper. The dissolving packing has not yet started to dissolve, but it is hanging out of his nostril and looks like a black hornet's nest, so he has to wear a gauze pad and looks very Michael Jackson. He's really weak-- we thought he felt okay on Saturday, so we took the kids to the splash park and dinner and then decided to hit up Trader Joes, and Ben almost passed out in the juice aisle, and we had to leave. He said he felt heat strokey (it was like a million degrees outside and so humid you could drink the air) and drank a vat of water in the car with the AC running full blast. Poor guy.

He was much better yesterday: 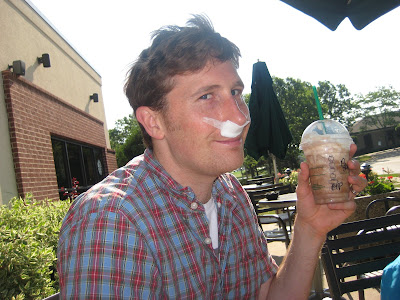 I was back to nagging him to pick up his own trash and arguing over who had to bathe the little beasts in record time. Phew.
Posted by Sarah at 12:53 PM

Poor Ben!!! He looks so miserable!

Ditto on the no surgery. It sucks. Glad he's feeling better.

Poor guy! Glad it's over and he is back to being a contributing member of the family - doing it all yourself sucks! haha.

there go all my dreams of getting nipped and ticked and looking like a total freakshow as I get older. :-) hope he recovers quickly!

I am glad Ben is getting better. DH hated the way percocet made him feel after his knee surgery years ago, so I have been through that hell. Hopefully he will continue to heal quickly so he can be back to his "old" self!

glad you haven't lost your nagging ability..guess our example is good. you sound like the Bickersons.....Bomma

It looks so good in the last picture! You can tell the doc did a great job! And I have seen a nose job or two, believe me! He will be so glad he had it done. It will actually breathe, as well as look good.

poor guy. but I love the way you tell the story.

I think it's great. He looks like a movie star on the last picture, even with the bandages on his nose. Men getting nose jobs are getting more popular these days, not just for celebrities but, for ordinary people as well. Because everyone has a chance to look and feel better about himself.

Roman lesnar said...
This comment has been removed by the author.
2:25 AM

thanks for the tips and information..i really appreciate it.. nose job men