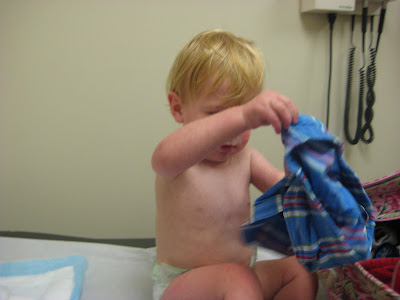 Good thing, too, because we had been dosing him up with Tylenol and/or Motrin and dragging him pretty much everywhere.

We saw the other pediatrician at our pediatrician's office, and she said he had the remains of healing sores in his mouth and throat and that he probably had hand, foot, and mouth which has been going around like crazy. How she saw anything through the Veggie Booty crumbs is beyond me, but she seemed pretty sure.

I was actually a little bummed that it wasn't swine flu because he was already on the mend, and if he got it now, maybe he won't get really sick this winter. Speaking of? I think I'll be avoiding the gym daycare like, um, the plague during cold and flu season. And giving Harry a Silkwood shower everyday after preschool.

But seriously, assholes like us are the reason for pandemics. On Saturday, we masked Jack's fever and took the kids to a fantastic brunch at a cute local organic cafe-- the kind of place with a kickass bakery, cozy benches and armchairs, and an extensive wine list. Ben and I both had wine with our food (vanilla french toast for him and a grilled veggie pita for me), and children were the only patrons NOT imbibing in the whole place.
Jack mostly smeared himself with cupcake and ignored his grilled cheese (a little too sophisticated for a toddler, with pesto and aged cheddar) 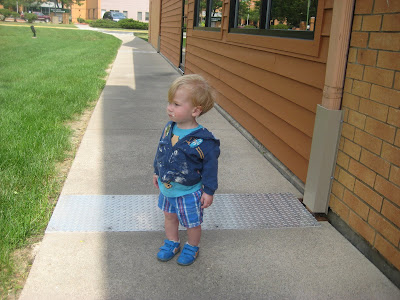 Harry snarfed some of Jack's infected sandwich, my mozzarella covered zucchini slices, and Ben's french toast and berries in addition to his own scrambled eggs and fruit cup, and he practiced turning into the Incredible Hulk 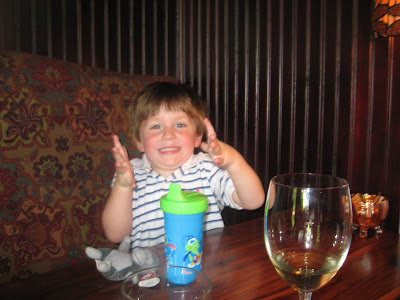 We haven't paid as much attention as we usually do to Harry because Jack's been sick, but he managed to occupy his time 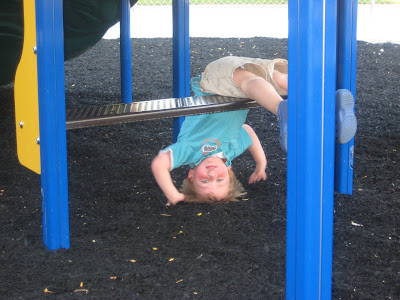 Ben tok this picture of me chasing Harry on the playground, and it cracked me up-- look at my legs all flopping to the sides while I run. Once a waddling fat kid always a waddling fat kid. At least I have finally learned how to dance like no one's watching. 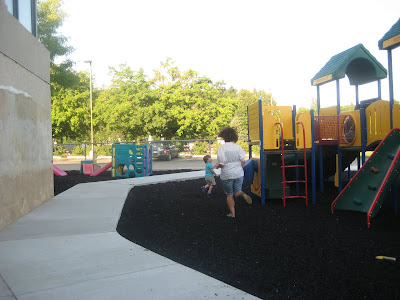 French toast AND wine? I think I need to visit Madison. That place sounds awesome.

Jack is so freaking cute! Glad he's on the mend.

so glad things are getting back to normal(all fouled up)..how is the bathroom remodeling coming?...did you get our anniversary card? Bomma

Yeah, hopefully it is more of a scare of H1N1 this year than the actual thing... But, luckily for us we will be spending most of November and December at home at least :)

JackJack is starting to look like a little boy,not a baby anymore...does that give you ideas?