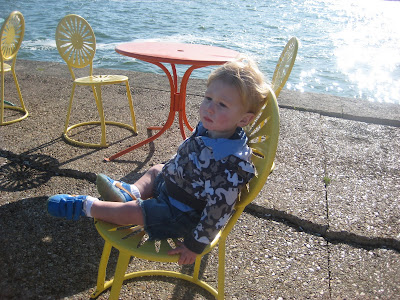 and his brother, this guy 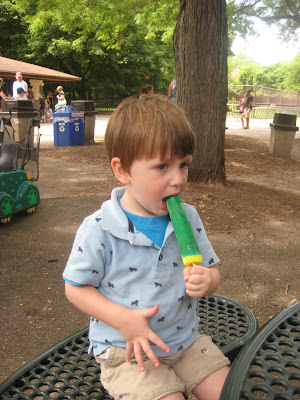 SLEPT IN THE SAME ROOM ALL NIGHT LONG!!!

We gave Jack a bath at 7 (well, I did) while Harry helped Ben grill burgers for tonight (and they played golf with Harry's plastic clubs) and read to him like always. When I carried Jack to his new room, he pointed at his pack n play and asked "Nigh nigh?" When he saw the crib (where he happily naps) filled with is Ugly Dolls and his blue fleece blankie (Harry gave it to him the other night, and I never want to quash any generous impulse, so we went with it, and Jack seems to be pretty safe-- how old are they supposed to be before they get blankets anyway?), he smiled and cozied right in.

Harry helped us cook and chop our farmer's market veggies (and he made a sticky mess cutting strawberries with a butter knife) until 7:50, when Ben gave him a bath. Then Harry watched Wubbzy, and we read to him on our bed and helped him tiptoe into his own room at 8:30. It's dark now at 8:30 (which sucks), so we told Harry he was staying up super late and had an extra special big boy bedtime, and he ate it up.

We had a rough moment at 11-ish when Ben and I (giddy with the freedom of sleeping in our room, we dawdled over Monday-morning preparations that we could perform before bed instead of immediately following dinner with screamy kids "helping" us (ironing has never felt so clandestine)) went to bed. I checked on the boys like I always do, and when I was covering Jack back up, his eyes fluttered open, and he stared right at me. I fled the room, but he started wailing. Ben and I held our breath for a few minutes until his cries subsided, and then we all slept until a little after 6.

All of us woke up by hanging out in our bed drinking milk and coffee and watching our shockingly awful local news (where the lead anchor woman brought in a Bud Light coaster from a bar on which she had scribbled the names of her Saturday night drinking buddies so she could give them an on-air shout out), and Harry told us that he didn't sleep well because Jack screamed so much.

We are not fooled by the smoothness of this first night and fully expect our night life to totally suck for a few weeks. Also, holy hell is our mattress uncomfortable and we are soooo buying a new one as soon as sleeping in our bed is a habit again).
Here we are at Harry's end-of-summer school picnic. it rained, so we had to wedge ourselves into tiny chairs 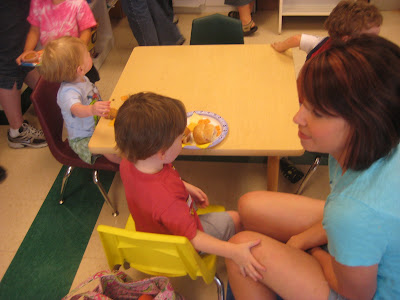 But it was really fun, and Harry's class made ice cream that they proudly served us. (And now just as I am starting school, Harry has a 2-week break. Awesome sauce). 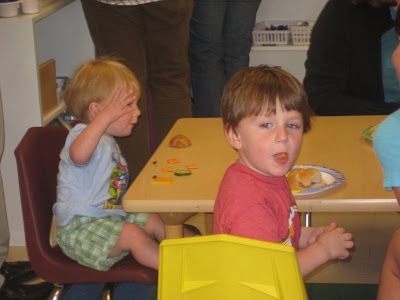 I'll keep you posted on the sleep sitch because I know you are all riveted.
Posted by Sarah at 6:56 AM

Sounds like a success! We had luck on vacation doing exactly what you did... put Wesley to bed then wait for him to be asleep, then put Charlie in.

Your news DOES sound awful! Crazy!

I love the picture of Jack at Harry's picnic. He is so into it!

And your weekly menus remind me that I have to do the same. Because throwing fishsticks in the oven every other night probably isn't good..

um. wow. that bit about your news anchor was priceless. i love it. i love that it's real.

omg, your news anchors sound like ours in LA--we have a weatherman who dances to techno while he gives the forecast.

hooray on the sleeping sitch!!