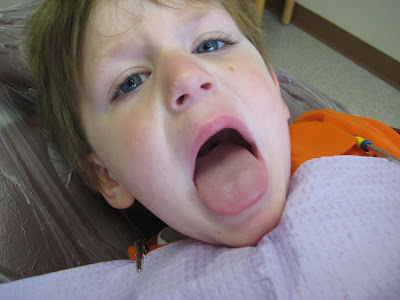 From the time he could roll over, Jack was a bad co-sleeper, preferring to burrow his way through a row of suffocate-y pillows, nearly flinging his little body off the side of the bed not wedged up against the pack and play, and deciding that 3 am was the perfect time to play a rousing game of "got your nose."

Last night was no exception.

In the 6 or so months since Jack and I last slept together, he has just about doubled in size, making him an even more obtrusive bedfellow. He has also developed a penchant for sleeping horizontally, on his tummy, with his butt in the air and his arms stretched backwards-- which, now that I think about it, is perfect child's pose. Hmmmm. Maybe the yogis are onto somethin'.

As an added bonus, last night, he was oozing virus from all of his sweaty little pores and orifices, so lucky freaking me on that score, as well. That's why we slept together-- because he had a 102 degree fever all day that would not come down despite Motrin and Tylenol in 3-hour intervals.

(We went to urgent care to be talked down to by a busy doctor who said maybe fifth's disease, definitely a virus, but what the hell, let's swab him for strep and make you all hang out in our germ covered waiting room for like 30 extra minutes playing with sick kids and terrorizing the fish in the aquarium until a busy nurse can finally come out and tell you to go home-- it's just a virus. Then the harried nurse started to launch into a speech about how a virus means that antibiotics won't help, and the doctor won't be writing a prescription-- I smiled at this through my hatred of the urgent care waiting room and the 22 pounds of limp, rashy, hot baby on my shoulder because I think people who demand antibiotics for colds/flus are freaking morons, and I appreciated the nurse's preemptive efforts. )

Anywho, it's always a bummer when kids are sick, but I think it's even more of a bummer when an eternally happy kid like Jack is under the weather (and also, he's my wittle bitty Mr. Preshus). He so obviously felt terrible with his peeling, rashy, scarlet cheeks, and his chills, and his glassy, feverish eyes, but he was trying to be his jolly old self-- only his smiles looked like they might actually hurt. He slept most of the day, but by bedtime, his temp rose back to 102 (from the 100.5 it had been hovering around), and he wanted to do nothing but drink a bottle of cherry Pedialyte, be wrapped up in a fleece blanket on my chest, and moan.

We had a tossy, turny night, but Ben let us sleep until 8:30 (would have let us sleep longer, but I saw the clock and bolted out of bed because Ben usually goes to work at 7:20-ish), and now Jack is fever free but down again for a morning nap, the poor little guy.

I didn't know Jack was sick yesterday until I called Ben on my way home from taking Harry to the dentist for the first time, and Ben said Jack fell asleep on the bathroom floor while Ben was showering-- so pathetic, huh? (and my first thought was like oh crap-- the babysitter can't come today, and I really needed a pedicure and some new shampoo because I SUCK AS A PERSON)

But Harry and the dentist? Amazing!
He was so good while I got my teeth cleaned. He let his action figures invade the dentist's office Fisher Price farm set and didn't even notice when the hygienist stuck her pointy rake thing into a sensitive spot on my gum and I squealed a little. When it was his turn, he was happy to wear some cool sunglasses to protect his eyes from the bright lights. 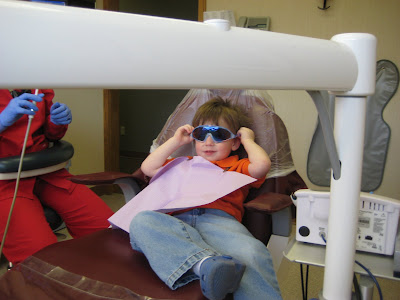 He listened with rapt attention while the hygienist showed him all her tools and instruments, and he was very happy to hear the result of his tooth count (20-- just like his Teeth Are Not Biting book told him there'd be). The ride up and down in the cool chair was just an extra awesome bonus. 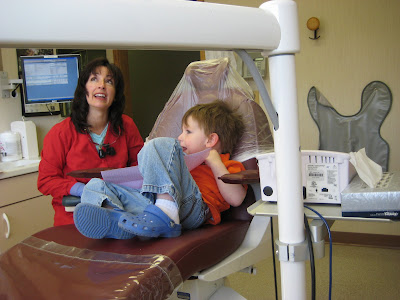 Look at him-- just like a twee adult (he loved the water squirter and teeny mouth vacuum-- his words -- the most, of course. 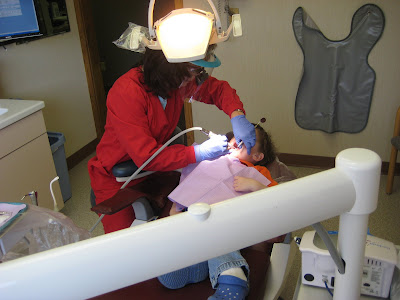 Then she told him he got a toothbrush and something from the treasure chest in the waiting room, and his head exploded from delight. 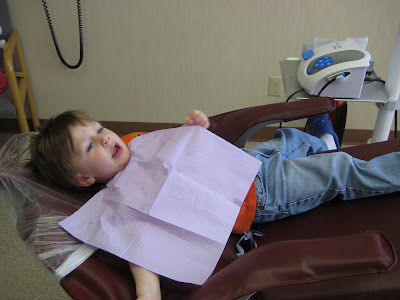 so sorry Jack has been under the weather..and happy that Harry likes his dental appointment...you and family will like our new Huntley ..he's 22 1/2 pounds of love....Bomma