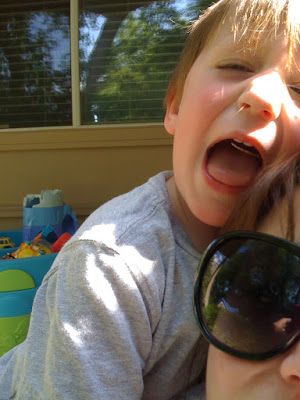 Um, Harry's turning 3 next week, and I am baffled-- where the heck did the time go? I realize this is the most cliched of cliched questions, but seriously. He was just mah baby, and now? Now so babyish (except, you know, for the pants pooping and the chubby little satin cheeks). His babysitter came over last night, and he said in a delightfully conversational manner, "Oh, Jamie. How was your frisbee game? Did you wear your contacts so you could see?"

I guess it is because we had another baby right away, but Ben and I are just now getting back into the swing of seeing movies in theaters and having wine-filled grown up dinners and having time to maintain our hair and nails (okay-- that one is more me than him). And we like it. A lot. Life with a kid and a baby is easier than life with 2 babies-- and if we allow ourselves to think about the future of life with 2 kids-- bring it, Disney World; we're ready for you!

3 is easy in terms of birthdays, too. He tells us what he wants (which is everything he sees on TV. Check). He picked out his own cake (Batman from Dairy Queen). We invited his class (and cousins and a few more friends) to the Little Gym because that's what he wanted (and because they say all I have to bring is the kid and the camera. Score.)

One tiny little thing that sucks a little about our almost-3-year-old right now though (because I don't want you to think it;s all roses-- my life is haaaaaaaaaaard, remember?) is that he's kind of a jerkface if he is not getting 100% of our attention at all times. When we look at Jack (or speak to him or god forbid tend to him in any way), he freaks out and turns into a toy-throwing, milk-flinging, insult-screaming menace.

Other than that (and the pants pooping), 3 looks pretty d (I was going to write "darn good," but I was interrupted mid-stroke to stop Harry from climbing in the Pack n Play, then to stop him from sticking his fingers in my coffee, then to ask him again to stay out of the Pack n Ply, then to yell at him to be a good listener as he lunged for my coffee again).

Wow! What a big boy! Charlie woke up yesterday saying "I poop in my bed!" Potty training is WAY overrated.

He is so funny! I can't wait t see him

that kid's got serious personality!