Jack gets really happy when he can help do things. Here he even doffed his tiara in appreciation of inclusion. Sometimes when we talk to him, he blushes and ducks his head which is a sure sign that we need to talk to him more. But who has time for THAT? (I'm kidding. Sort of). 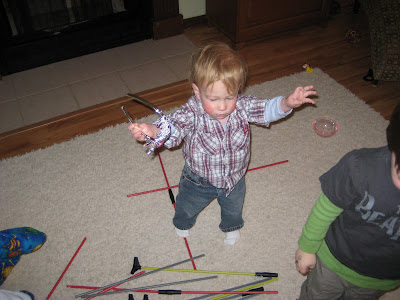 Ben was so glad for all the assistance, and Jack only got hit in the face with house poles a few times. I blame the influence of Kung Fu Panda. 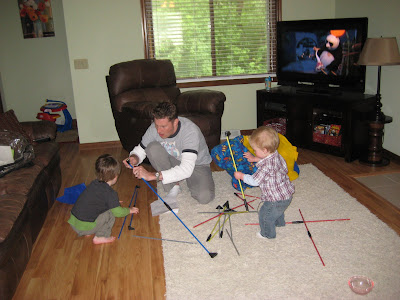 Oh look! It's Ben and the mini Bens-- someday they will be his army of trained ninjas-- or, as Harry says, "injas" 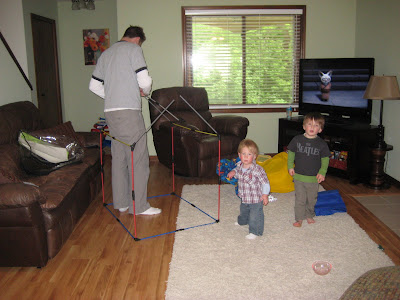 Jack has been noticing the boob tube lately, and while I never would have let my preshus Harry Beary Angel watch a millisecond of TV before the AAP said he could (and I was soooooooooo judgmental of people who did let their toddlers look at the glowing talking box), I find myself hoping that something catches and maintains Jack's interest for a few minutes (or 20), and while the TV babysitter has him captivated, if she could just teach him how to count and spell, that'd be awesome. 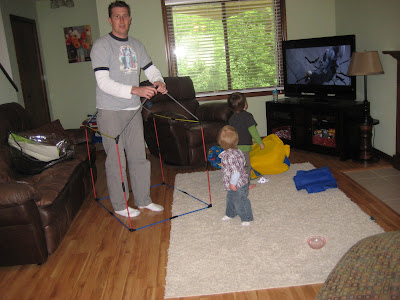 I took a picture of Harry in my Uggs before being horrified that he was wearing shoes in my house because this is what all the coastie undergrads wear on campus-- leggings, short shirts, and chunky Uggs. Year round. And they carry $1500 purses with disdain. They're so cool 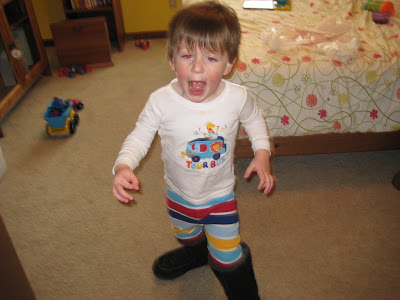 Edited to Add: Ben! Looking at these pictures made me realize you were totally right about the red lampshade!
Posted by Sarah at 8:32 AM

Love Ben and the mini-Bens! So true. Jack looks so much like Harry. Adorable.

I love pictures of kids helping with "manly" projects!

Harry looks so cute in the coasty clothes!