We recycle. You should know that before you put your judgey pants on. We also eat organic dairy and local produce and avoid processed foods as much a possible or at least buy the organic versions of processed snacks that claim to be made with sustainable practices and are probably just as shitty as their mass produced, HFCS-filled counterparts but assuage our guilt more than anything else. We also have energy star appliances and drive pretty darn fuel efficient cars. And Ben has an adorable tomato and herb garden.

But other than that? We are giant carbon guzzling assholes who make ourselves comfortable and gorge ourselves without a second thought to the land we're raping with our daily acts of consumption. We take long showers. Sometimes twice a day. We run the water while we're brushing our teeth. Sometimes we drink bottled water despite the water filter on our faucet. But here's the grossest thing: we keep our house at 72 degrees during the day and 68 degrees at night.

Or we did. Until our stupid AC started to labor at 76 all day and about 70 all night. So we called around and finally found an AC company who wasn't booked solid tending to people with real problems in this heat wave (which? should have been a freaking red flag). They came over yesterday, changed our filter (which was only about half dirty-- meaning it's also half clean), CLOSED some vents in our living room (WTF????) and explained to Jamie why our duct work is totally effed. Then they called Ben and said they'd be back in 2 weeks (!!!!!?????) to clean it out and put more coolant in (also, have we ever considered covering it in the winter, they asked. Hahahahahaha! Silly AC company-- we're wasteful idiots). Then Jamie turned the temp down on the digital thermostat from the sticky 76 it was set at to a heavenly 73. As soon as she typed in "73," the read-out magically changed to that number, and the AC shut down.

So now, I am convinced (convinced! and nothing anybody says can change my mind!) that it is 3 degrees hotter in here than the thermostat says and that the guy screwed with to to make it LOOK like he had done something. Yeah. Ben thinks I'm off my rocker, too.

But it's a moot point because the damn thing ran all night and failed to reach its target temp (which was so low, I am not even going to tell you what it was. I should just buy a freaking Hummer), so it doesn't matter what the temp is-- the fact is, the AC is NOT WORKING UP TO ITS POTENTIAL. I'm sending it to Sylvan Learning Center for help with its math and reading skills.

I've opened the windows for the first time in DAYS because it's getting stale in here. We're going to see if the old machine can cool things down once it reaches 80 in here and if it can't, we're going to have a huge fight and throw things at each other.

Kidding. Another company is coming out tomorrow.

In the meantime, I am taking this guy 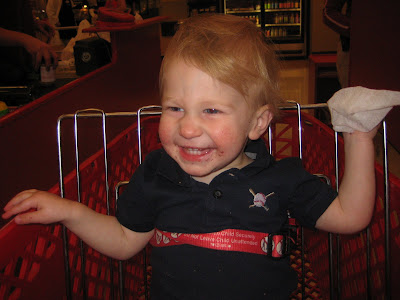 to the doctor to see why his cheeks are so red and peeling. I hope it's not psoriasis, but I wouldn't be shocked. Its also spreading to his elbows. And since I mad the appointment, it is also CLEARING UP. Of course.

And he's probably going to take his purse-- can't pry it out of his hands these days. He even wears it as a hat. 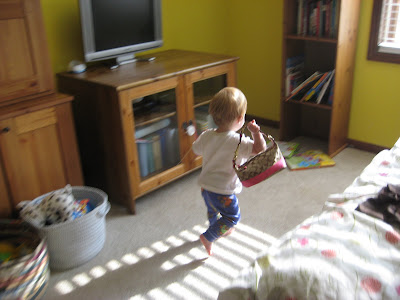 And I am kidding about us being assholes. I mean we are, but we have better intentions than this post makes it sound. It's hard with little kids and the tempting array of convenience products and the disgusting amounts of consumables we "need."
Posted by Sarah at 8:42 AM

Yeah, I think the AC guy yesterday was off his rocker! I have heard from multiple (professional) sources that it is not good to close more than one or two vents in the house.

isn't weather fun, and trying to deny global warming...doesn't seem to effect chilren as much as grown-ups...I don't remember ever feeling bad when it was hot and I was young....Bomma

Good times! Ours runs a lot at day upstairs and it is set to EIGHTY TWO! The kids wake up sweating. It is gross. I am not a huge fan of Texas summer.

We too are AC cranking, organic eating a-holes. We just had our heating and ac system replaced after weeks of suffering in the Maryland humidity. In a sick form of celebration have turned it as low as 68 at night. I then proceed to dress Mary Catherine in her fleece nightgown and complain about how chilly I am. Feel better?

But I buy Annie's peace sign mac and cheese so that totally makes up for it :)

I hope your ac is fixed soon.

I LOVE the way Jack runs! I want a picture of the puse hat!