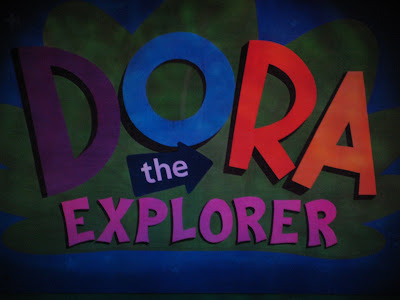 Dora appeared to be wearing a fat suit, which is the only detail of the show that really surprised me. It was an awkward fat suit, too-- not very fat, very flesh-colored, only padded on the bottom. She had a definite FUPA in her orange shorts, and I wondered just how much she loathed herself, deep down, to accept the role of Dora. I mean, there aren't even any programs distributed at the show. She's just that actress in the awkward, flesh-colored, lower-body fat suit who jumped around and pretended to be a map-reading preschooler for 85 long minutes. The rest of the cast, though, suffered more severe indignities. Like Isa, Benny, Tico, and Swiper, who performed in giant mascot-like plush suits and danced their stuffed asses off. Poor Baby Jaguar who actually had to crawl around on all fours. The blue morpho butterfly lady who spent her whole time onstage suspended by wires, flapping her wings to talk. The map, whose arms and legs stuck awkwardly out of her rolled-up costume. She had a pretty face, and she sang just off-key and hammily enough to let us know that back in the day, she was the absolute star of her performing arts high school's spring musical. Every spring. And Boots the monkey, who danced in giant red plush boots that made Uggs look sleek and dainty and had to swing his left arm constantly thanks to some idiot choreographer's intense need to communicate "monkey" at every moment of the show-- even though the guy was wearing a frigging monkey suit and frequently found himself hanging upside down from clumsy-looking wires. I think the second act was delayed a few minute because Boots was engaged in some ritual self mutilation. And who could blame him? He cuts because he hurts. The only character who had any sort of corporeal dignity was Diego, who wore cargo shorts and a preppy jungle vest and regular tennis shoes (Dora, Boots, and the Map all sports outsized stuffed footwear). But he spent most of his time cavorting across the stage conversing with a howler monkey, a whistling tapir, and the aforementioned flappy butterfly, so I guess he got his. 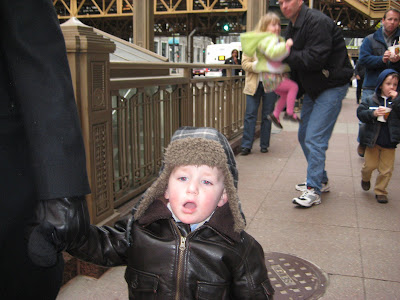 If he could read, Harry would be entirely unamused by the above description because he is nothing if not slavishly, solemnly devoted to Dora and her special guest star Diego. (When Map announced that a surprise guest would be making an appearance in the second act by telling the audience of hushed, anticipating children that Dora's cousin would be dropping by, Harry grabbed his cheeks and screamed, "Cousin Diego! I told you Diego would come, Mama!) 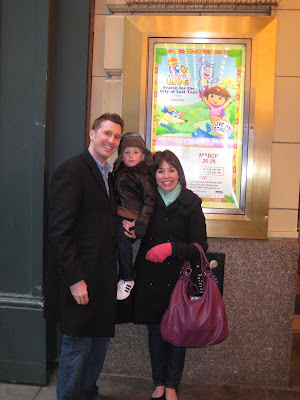 After scolding me three days before the show for being so "spendy" when I had a conversation with Harry about the kinds of things we could buy in the theater lobby, Ben bellied up to the concession stand and bought one of every stuffed thing they sold, plus a flashlight and an $8 mini-bag of Goldfish crackers. Harry's favorite souvenir? The paper star that an usher gave him. OF COURSE. 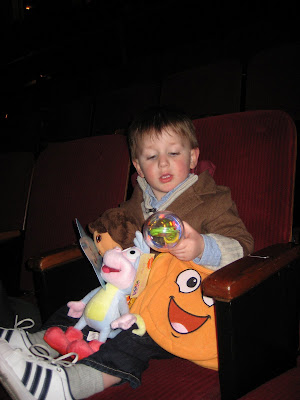 Ben and I both got a little choked up during the show's opening number because Harry was so happy and excited. When each character appeared onstage, he screamed their names in delight and disbelief. When the theme song began, he looked at us as if to say this-is-the-very-best-thing-that-has-ever-happened-to-me-and-almost-makes-up-for-that-baby-brother. 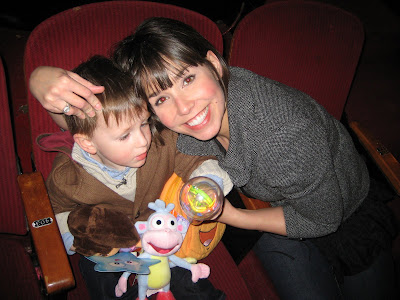 We all decided to wear jeans and jackets. 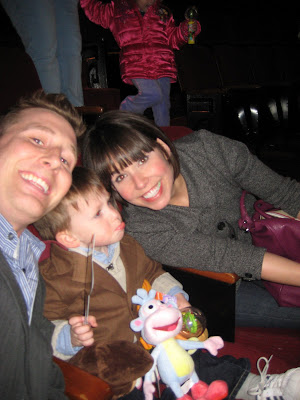 We went out to dinner at Bin 36 in downtown Chicago after the show. We've been to that place before, and it's very loud and casual, and the hostess assured me they had a children's menu when I called to make a reservation. Plus they have lots of wine. And it was a 5 minute walk (with a toddler-- without him, even shorter) from the theater, so we thought it would be perfect. When we walked in, however, we realized that Harry isn't one for cloth tablecloths and napkins or candles on the table. The hostess led us to our table, and he said "Wow! I have 2 forks!" So he's not one for courses, either. We were seated right next (like on the same banquette) to an older couple who were splitting a bottle of wine and had their heads bent towards each other in quiet conversation. They did not look happy to see us or our high chair. We almost left and went to the Potbelly across the street from the theater because we weren't sure if Happy Harry or his evil twin Tantrum Harry would be joining us for dinner-- also we have become really skittish about dinners out since Jack's colic days when we frequently ran out with our hot food in a box mere moments after sitting down. Then we stopped going to places where you get hot food or sit down. We ordered Harry a lemonade and some fries as soon as our waiter came within shouting distance of the table. When the drinks arrived, Ben reached across the table to help Harry with his plastic lid and knocked his wine EVERYWHERE. Hilarious! Even the couple next to us laughed. Then Harry spent the rest of the meal listening to me read him some books and making polite conversation. Also he had wine all over his sweater. Ha! 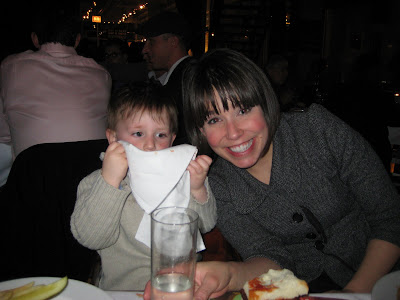 W parked our car at a hotel that was in between the theater and the restaurant, even though we have had bad luck parking at this particular place. When we had our Matrix (which I totally miss, by the way), this place lost our valet key and never found it. Wen we returned for our car after dinner, they, um, couldn't find it. Ben sort of lost his shit and started loudly inquiring as to its possible whereabouts and sweating under the heat lights in front of the revolving doors. So Harry and I went into the lobby to pee and throw pennies in the fountain until Ben got his wish. 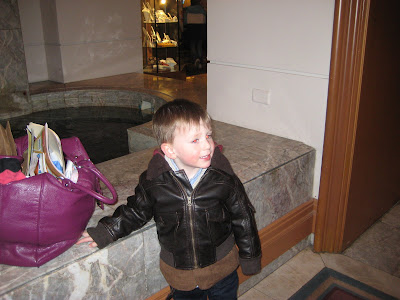 Harry passed out so hard on the way back to St. Chucks that we put him to bed. In his wine soaked sweater, his blazer, and hist belt (also his socks, and all his shirts and his jean. IN HIS CLOTHES, is what I am saying). He woke up the next morning laughing at his get-up. And demanding to be changed into his jammies. 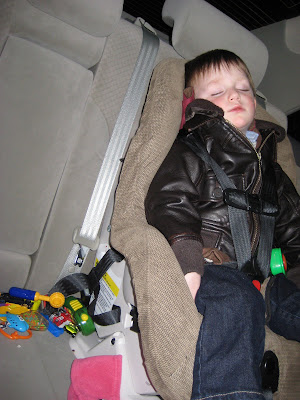 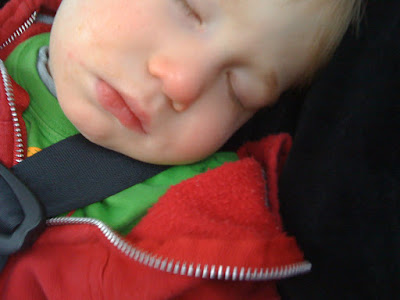 Not invited. He hung out with the J grandparents. His grandma pointed out-- quite rightly-- that feeding Jack a bottle is like feeding a lamb or a calf. He doesn't like to be held, nor does he use his hands to help hold the bottle. Instead, he sits up or hangs out on all fours and sticks his face out for the bottle. Very cute. 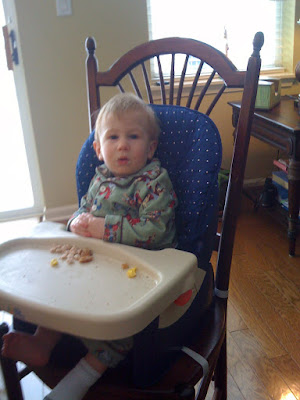 I just asked Harry what his favorite part of Dora Live was, and he took the plastic Spiderman's web he had been sucking on out of his mouth long enough to say, "When her sang 'We did it. Woohoo.'" So there you have it.
Posted by Sarah at 8:35 PM

that had to be a wonderful time..remember when we went to see Star Wars or it's take-off Space Balls (memories aren't too accurate) and you yelled out when they said Druish princess that they meant Jewish princess and you weren't much older than Harry and as always, my delight...Bomma

Oh, fun. I love it when they practically explode with excitement! I love the way you get Harry all dressed up! Charlie's fanciest outfits unfailingly make him look like he's off to Catholic school.

This made me laugh out loud! It is hilarious! I remember going to Sesame Street Live with you guys, but we just went with the nursery school. No fancy dinner after, or cool downtown, with valet parking, come to think of it. I LOVE the idea of Jack at the petting zoo! I guess he should have Rye Crisp at his party!

I love this post! I loved your constant stream of mobile pics on FB that day.

I can only imagine the Heart of Darkness that is backstage at Dora (or any mascot-costume based production). But I'm so glad Harry loved it!

"She had a definite FUPA in her orange shorts, and I wondered just how much she loathed herself, deep down, to accept the role of Dora."

I cannot even describe how hilarious I found these observations.

I just wanted to tell you, THANK YOU! I tripped over your blog while trying (half-heartedly) to look up Dora Live ticket prices and you totally crack my shit up! Sadly, it seems as though Harry had a blast and I was hoping in vain that you would describe some situation where Harry himself demanded to be removed from the theater... My 2y/o Laynie has been running around the house screaming "DORA LIVE! I WANT DORA LIVE!!!" And typically I would tune this out but (ugg, sigh...) It comes to St Louis on her birthday weekend, so here I am. Anyway, I digress... Thank you so much again! Jana Caldwell Ricker

I stumbled upon this too and thought it was so funny I linked it to an article on my blog. Hope it sends some readers your way.