Jack can talk! He says Harry (Hahe), Mama, Dada, Jack-Jack (ack-ack), bottle (baba), ball (ba), and hi (hhhhaaaaaaaa). I love baby babble-- it's just the cutest noise I've ever heard. And he flashes his tiny little teeth, which I also love. Note that you have to be trained in Jackanese to totally understand these words, but he definitely knows what he's saying. He has also perfected the scream-and-point which should serve him well until his vocabulary develops further. 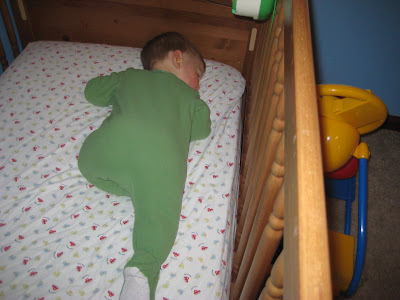 What a sweetie-- he's happy enough to see us, even though we woke him up taking pictures 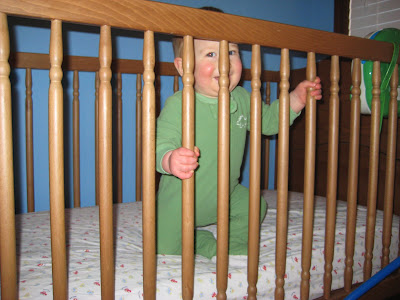 Notice the scrape on his upper lip? He face planted on Harry's wooden Melissa and Doug sandwich tray 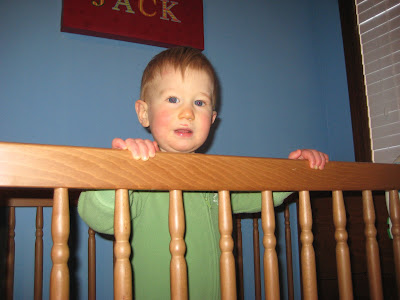 He HATES getting dressed-- here is is clothed on top and pajamaed on the bottom. 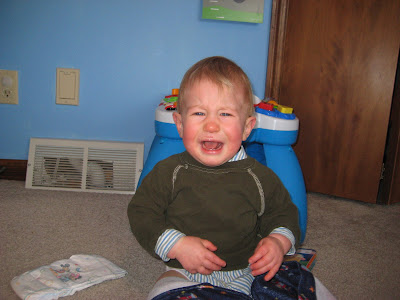 This little munchkin? Has a fever again. Probably all day, but I only noticed while struggling him back into his pants after his postnap pee. He was all, "It's too cold in my bed. Can I have a blanket?" when he woke up, and I was like "No way, man. We're going to Trader Joe's and the gym." He was bummed to hear that, and I got kind of pissy, and then I realized he probably has the chills because he's sick. Again. Mother of the Year. 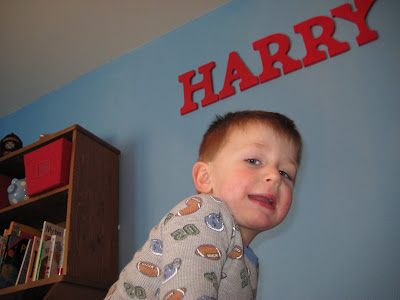 Wow, talking! He is a big boy!! Too bad about the one leg. Love the new pictures!

Oh god, if you click on that picture of Harry and make it huge, he has SO MUCH SNOT coming out of his nose. SO GROSS!!!!!

I wish I understood AJU5-anese - she says a lot but I understand almost none of it! Luckily she is like Jack and has the pointing thing down (she doesn't scream though - just whines).

And poor Harry - sick again. Don't feel so bad about not catching it though - I think I have missed AJU5's cues a few times too...

Awwww, I love sleeping-baby-with-butt-in-the-air pictures SO much!

we all do the best we can as Mommies, but we never know what they will remember as grown-ups...you'll be shocked...Bomma

I LOVE the term "Jackanese!" It's great.