Next time I bribe Harry, I am going to have the promised item stashed away in a closet somewhere. That way when he does the thing I've spent months trying to bribe him to do, I don't have to use my making dinner/ folding the laundry hour to throw both kids in the car and rush to Toys R Us in the rain. At Toys R Us, by the way, I put Jack in a cart only to discover that the cart was short one working seat belt-- no belt is not an option for Squirmy McCreepylongarms. To get a new cart at my Toys R Us, you have to walk around the seasonal toy display, past all the checkout lines, out the exit, across the front of the store, and back into the entrance because all the carts are in the lobby. So, I just attached Jack to my hip and held Batman, Batman's giant Batcave (which Harry calls Batman's house), and two cans of processed Gerber snacks that caught my eye on the way to the Imaginext aisle in my free hand. This didn't leave me any hands with which to wrangle Harry, but he was so excited about Batman's house that he happily followed me to the check out line. Then I dragged all the crap and both kids back out into the rainy parking lot. My sweats got all wet and gritty on the bottom because my Pumas are so flat, and I am barely tall enough to ride rides (by the way, hell yes I was wearing sweats. I was also sporting rain-induced puffy hair and an inappropriately sheer pink long sleeved T-shirt that nicely showed off my polka-dot bra. Especially when it got wet), and Jack DID NOT LIKE the rain on his face. I got everyone (by which I mean both kids-- it's not like I'm Octomom or something, but "everyone" sounds more dramatic) buckled in and shoved the giant bribe bag in the passenger seat because it wouldn't fit anywhere in the back and my does-not-fit-through-doors double jogging stroller was hogging the trunk and realized that my keys were gone. I dumped out my diaper bag and reassembled it. Twice. I got out of the car and checked next to both carseats (I often toss my keys next to them while I am buckling them in) soaking my pants up to mid-shin. Finally, I called Ben-- not that he could do anything for me. I just needed someone to scream at. He wisely let the call go to voice mail-- he has excellent instincts about that sort of thing. We straggled back across the parking lot into the store, Jack screaming his protest, and Harry asking me eleventy billion times if we could go home and play with Batman's house. My keys? Not at the checkout line. Not on the Gerber processed snacks shelf. Not in the Imaginext aisle. I would have definitely called Ben to scream at him again, but I left my phone in my (unlocked) car. Bummer. Seconds away from joining Jack in his weeping, I spotted my keys by the front door of the store-- in the basket of the cart I rejected because of its missing seat belt. We dripped our way home to make dinner, Harry demanding that I free Batman's house from its box, Jack whining a sad, sad song in between bites of Puffs, and me ringing out the cuffs of my pants because I was too lazy to change and because the sweats just went with my over all look.

All told, that was one expensive poop in the potty. Also, I am pretty sure he crapped his pants while I wrote this. 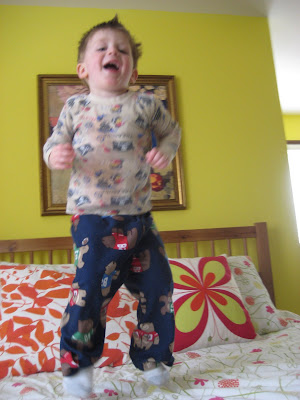 another great motherhood experience to laugh about in the far distant future....Bomma

Once I left my keys clipped to a shopping cart at Target. I also only realized it once we had gotten back to the car and strapped in and then I had to run back into the store and look at every cart in the whole store before I found them. I'm right there with you.

I hate the shopping carts that don't have shoulder straps! Because AJU5 has short legs, the lap belts don't keep her in. I end up doing a mix of carrying (and pushing at the same time), telling her to stay seated, and chasing her over the store when she wants to walk (and push the cart- acceptable behavior). So, conclusion: they stores need to make better restraining devices and check to make sure they are still functioning!

Congratulations HARRY! What a BIG BOY. I AM SO PROUD!

See, this is why I love reading other moms' blogs---I am learning from your ToysRUs debacle..."be prepared with bribes".

Sarah, you have imparted wisdom today. Thank you.

And yay, Harry! Both for pooping on the potty, and for using poopy underwear as a tool of irony. brilliant!

This is why I love reading your blog: not only do I get entertainment and a laugh, but I also get advice. Next time I promise J someething for going potty, I'll definitely make sure I have said item!

And congrats to Harry for going on the pot.