The Boringest Family on the Block

If you have read this blog for awhile, you know that my sense of humor is not, erm, sophisticated. But the thing that has been cracking me up more than fart jokes lately? Harry exercising with these 3 pound weights-- you should see him strain and grunt-- like a cartoon muscleman with a bulging barbell, forehead sweat beads and all. 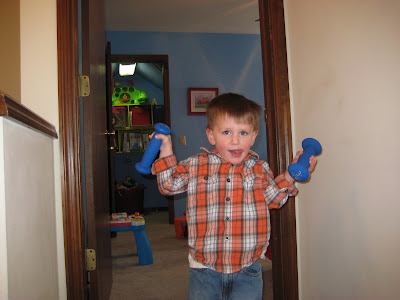 Not funny? Harry's brand of knock knock joke. Like most little kids, the non sequitur or totally nonsensical punch lines make him scream with laughter. Sometimes he actually prefers NO punch line (Knock knock? Who's there? Witch? *hysterical laughter*) The catch? He will NOT be the one who initiates the joke ("I hate saying knock knock," he says emphatically). Instead, he directs the whole thing ("Mama, say knock knock and it's a witch," or "Dada, say knock knock and interrupting cow.") A barrel of laughs, I tell you.

Also, I cannot stop dressing them alike. Here, you see it was jeans-and-plaid-shirt day. I really can't help it-- I pick out one kid's outfit, and then when I am choosing clothes for the other, I can only think in matching terms.

I finally wised up and took the phone out of the phone cover when Jack plays with it. This has stopped him from calling people at random (most of the time my advisor-- at really bad moments-- like 7:30 a.m. when we were on our way to the gym playroom and I was using my not-so-nice voice to be heard over the washer dryer as we stopped in the laundry room to put on our shoes, for example). 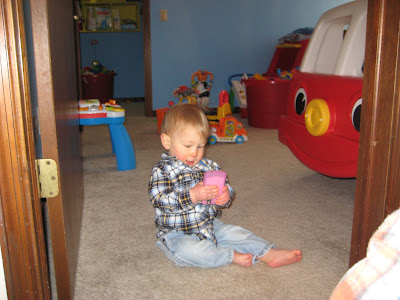 As you can see, Harry is still totally into Toy Story 2. Here he is being Woody and riding his horse Bullseye, whom he implores to "Ride like the wind." 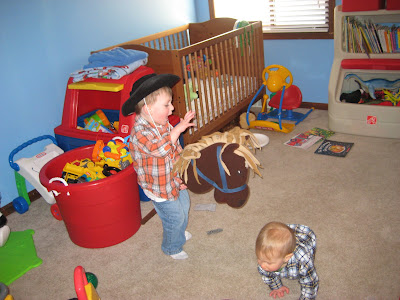 We had a super boring weekend, the highlight of which might have been a trip to Word Market for more covered baskets in which to hide our unsightly clutter. We also spent Saturday night at Super Target which was equally intense. (Although, we did note that World Market has the cutest Easter basket stuff-- retro wooden toys, stuffed spring animals, adorable candy-- this side of Pottery Barn Kids, and we are definitely going to take a trip there to help the bunny out as soon as we can finagle a babysitter because we are party animals). We were riveted by Big Love and cracked up a thousand times watching East Bound and Down, but we remain too stupid to appreciate Flight of the Conchords. Oh! We unlocked a new character in MarioKart, and Ben discovered he hates the steering wheel. Also, we can only play for a few minutes because we start to get really, really mad at each other (Was that your red shell? &*^% you, you piece of... you get the idea). We try to play after bedtime, but yesterday we grabbed a quick game during Jack's morning nap, and on the way to dinner last night, someone honked at Ben, and Harry said, "Dada. That guy honked at you. I think you need to say bad word." We are so classy.
Posted by Sarah at 7:21 AM

Finally someone else who has discovered Eastbound and Down! Brad is obsessed with that show. I think he has all of the episodes memorized.

OMG Cathleen-- Ben too! He would listen to Kenny Powers motivational tapes if he could.

I was so happy when I found the key lock on my cell phone! It saved having to explain calls to people.

And our lives are just as boring - don't worry!

One time I left a five minute voice mail of me singing along with the radio on my advisor's phone. And I didn't even have a kid to blame it on (I was juggling a bunch of stuff when I got into the car and hit "send" by accident).

And I would be thrilled to go to Target with Ryan by ourselves. Romantic!

I love that show, too! I think it's because Kenny is so vulnerable. I am always hoping this plan will work out for him, and then he BLOWS IT and shows himself to be himself again! I also LOVE the sister-in-law!
I would do Harry's jokes ANYTIME!
"Look at that bunch of cows..."