All work and no play

The pre-school newsletter that Harry brings home in his backpack (his back pack! his teeny, tiny, rocket-ship-shaped back pack full of extra Pull-Ups, wipes, and a spare pair of jeans!) suggested that we tell our child the story of the day he was born. On Sunday night, Harry had a terrible time going to sleep. He usually tosses and turn and reads several picture books to the audience of animals in his fire truck before he passes out on his back, his arms akimbo, a sippy cup wedged between his chin and his shoulder. Sunday night, springing forward kept him up longer than usual, and we heard him flinging himself off his bed repeatedly, yelling, "To infinity and beyond." We ignored him as long as we could, but it was almost time to hang with our new friend Kenny Powers, so I went upstairs, squeezed myself into his bed, and talked to him about the day he was born. I didn't really give the story a lot of thought before launching in, so I didn't really know how much detail to provide. In the end, I definitely overshared, and Harry thinks that the phrase "my water broke" should be accompanied by a huge bang. Don't ask. He was still banging around twenty or so minutes later, so Ben sulkily abandoned his wine and went upstairs. He was gone for a really long time, so I put down my iPhone long enough to creep up the stairs and listen at the door-- Ben got way sidetracked in the story of Harry's birth and was talking about his job, telling Harry how much better it was to BE the man than to work for the man. Hmpf. Between my story that inspired a violent, banging outburst and Ben's birth narrative turned capitalist lullaby, Harry still doesn't know very much about the day he was born, and he didn't fall asleep until well after 11. That's the last time we follow the advice of child development experts, that's for sure. Back to our strict policy of completely ignoring the kids after we say "night night."

Not sure exactly what all of this has to do with anything, except that I have a hard time remembering exactly what happened the day Harry was born because oh my god. He's so big. 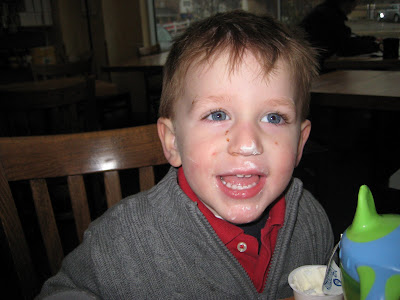 He and I had breakfast at a coffee shop on Saturday morning. Then we took a cold, rainy walk downtown to my office 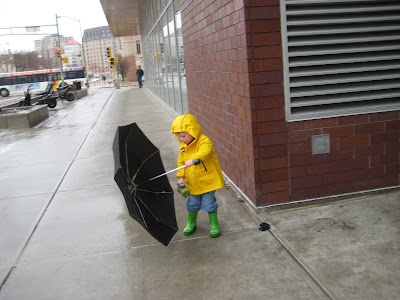 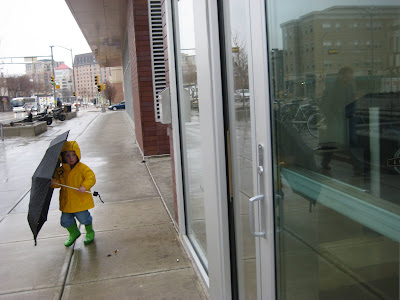 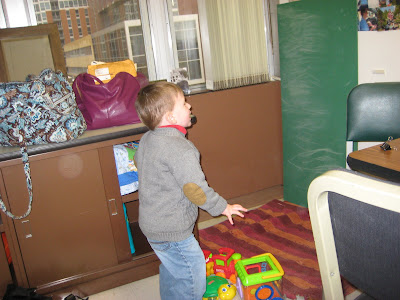 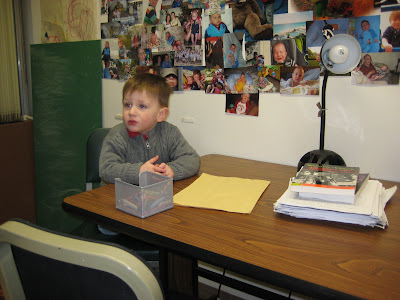 Here he is making his best thinking face 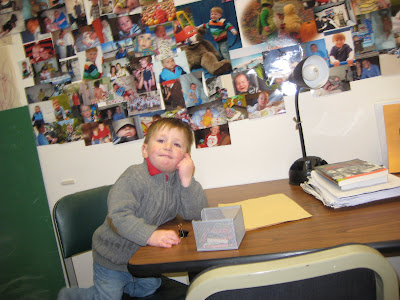 and dong his professor impression 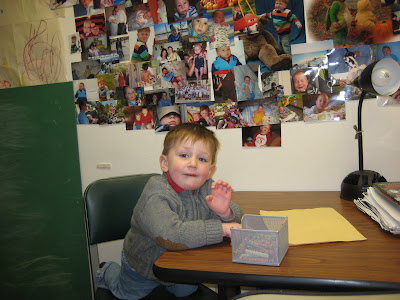 I spent some time working on Saturday, knowing I was missing out on all kinds of quality time and adorableness. Not to mention naps. I am making steady progress, which is good. I am working on the 4th draft of my introduction and the 3rd draft of my fifth chapter. I also need to write a conclusion, and just for extra freaking fun, I get to redo all my effing endnotes because even though I cited my archival documents exactly how the Sophia Smith collection suggests that I cite them, I need to make my citations more specific and quote box and file numbers. Which would be annoying if I had kept things organized by box and file. Unfortunately, it is MADDENING because after I researched proper source citation format, I organized my material by chapter. Spring break here I come! Woo-hoo file boxes! Maybe I'll take some roofies while I work or wear a bikini or put a keg in my office for the week. I owe my advisor a draft on March 23rd, and I hope the final, final, final draft will be in my committee's hot little hands by April 15th, so I can maybe enjoy my baby's first birthday.

My baby's first birthday? Unbelievable. Ben and I better start brushing up on his birth story.
Posted by Sarah at 7:39 AM

Sounds like you and Harry had a great Saturday morning together. I love the story telling. Luckily I wrote down what I remembered about AJU5's birth about 10 days later. When I read through it a few weeks ago, I had forgotten so much!

we know you are working hard, and I'm so glad Harry can help at the office...he looks great outfitted for rain!!!!Bomma

I LOVED Harry's "Singing in the Rain" number, too ! He is so cute!