I am freaking out here. Ben has thrown up his hands and surrendered the checkbook, telling me to calm the frick down and to pay deposits at as many schools as I need to to stop talking about fricking* preschool.

But still, I cannot stop obsessing.

Option A: We have a spot in a lottery to draw a number to enroll in a SUUUUUUUUUUUUUPER overpriced arts-centered school. A lottery, people, to enroll in a preschool. And if we are lucky enough to get to enroll, we get to put down a deposit the size of our mortgage for the honor of sending our kid to a school where the monthly tuition is more than both of our car payments. Combined. Rock on.

Option B: We are number 25 on a wait list for an awesome, teeny tiny school that we think is fabulous and adorable. Number 25 even though I called to get on said list at 9:03 on October 1st (the list opened at exactly 9:00). Number 25 would be a good number, but they only take 32 kids his age, and all the people currently enrolled in the 2 year-old class are also ahead of us. As are formerly enrolled families, board member families, children and grandchildren of staff, and church families (it's attached to the coolest Unitarian church ever).

Option C: Um, the place he goes to now. Which we love. And appreciate even more after eleventy billion preschool tours. I wish we had not looked anywhere else because I am a wreck, and it made Harry kind of nervous, as well. On our way to the cute little Unitarian place that we'll never get into, we passed his current school, and he screamed with joy, "My school! There's my school, Mommy!" in a tone that seemed to say "that's where I go, so why the hell are we looking at all these other places? Also, can I have some licorice?"

I am so stressed about all of this. Which, I now, is totally and completely ridiculous. He's 3. It's preschool. I know this, but it does not change a thing. Drama queen much? 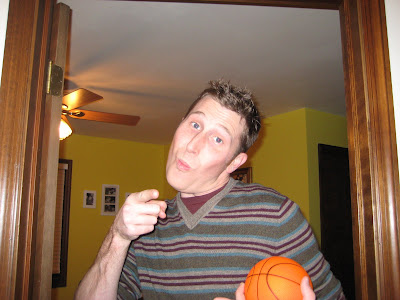 This guy totally told me so.

* We really need to stop cursing, as Harry has said some things that might sound a little like naughty words, which he calls Dada words (which is awesome considering I cuss like a sailor). He said something that might have rhymed with truck, and when we gasped and said "Harrison, what did you say?" he said, "I said 'flower' in Chinese." Then he said it again later, and when we got stern, he sang "and Ming-ming, too. We're Wonderpets, and we'll help you." (The song goes "Linny, TUCK, and Ming-Ming, too..." What are we going to do with ths kid? Uh, stop cussing around him, I guess.
Posted by Sarah at 10:43 AM

My opinion as a mom of a 21 and 23 year old is hoose the preshool he currently attends. He considers it his school and is comfortable and happy there. You have darling boys and you are so hilarious. I love your blog and have been where you are. I drove my hubby nuts while our kids were rowing up and he's a psychologist! LOL My drama wore me out over the years so I am pretty laid back these days. hugs nance

thank you for making my evening fun...when your mother was to go to preschool, we did much the same thing, Leslie tried a preschool, but a bad boy hit her so she dropped out, asnd the twins had each other, which did save some money...Bomma

I don't think you can go wrong! He's at a place he loves now and he's on the list at a place you love. Yay!*

*I'm signing Charlie up for a new school in the fall and paying the deposit in the event I am not working. So I totally get the hysteria thing.

Ahh, I am so glad we have decided to homeschool. I don't think I could handle the stress!

Dude, that sucks that you decide just to put weirdo pictures of me on this blogovich thingy. I am going to have to commander this blog again and just make a post call awkward pics of Sarah.

Do you think that when you drove by his school and Harry pointed it out, he expected to be a hero? Like you would say, "Oh, of course, thank you, Harry, that is your school."And the problem would be solved the way it is in a children's book.
If that had happened, I imagine that on one level he would be scared. Jon always felt it was the worst part of his childhood when he realized his parents were IDIOTS, and we were driving this bus! Unfortunately, he was about 3 at the time!

We are also in the middle of the preschool insanity. I'm so glad to read other people's versions of my same nightmare. It doesn't make it any easier or less stressful, but at least I don't feel alone in crazytown. Thanks for writing this! Good luck.

The whole preschool thing gave me hives. Go with the place he already knows and loves. He'll be happy and you won't have to take out a second mortgage.