What the eff are you doing writing this while your babysitter is watching your kids so you can work?

Where the hell have you been all my life? Leave me alone.

PS: I am drinking fair trade coffee, so stuff it.

Seriously, I shouldn't be blogging right now. But when I ran out of the house the second my babysitter arrived to care for my cranky snot nosed little angels, I also forgot my marked up copy of chapter 3 and the book I am currently reading, so I actually have less to do than I would like because I would rather eat my arm off (really) than go home and get that stuff and potentially screw with jack's nap, which would, in turn, totally wreck his afternoon nap, which would, you guessed it, make him a blathering mess by dinner time, rendering me shrewish, dinner hard to chew-ish, and Ben cranky, too. Harry? He'd jut watch too much TV and ask in an increasingly frantic manner if we would play with him. Eventually, we would get so annoyed by that constant question that one of us would snap "No! Of course we won't play with you! Watch some more Diego!" Then we'd feel like total crap and probably cope with our feelings by bickering for the rest of the night and possibly into the wee hours of the morning, depending if Jack's messed up naps threw off his night sleep, which, let's face it, they probably would.

So that is why I have a little extra time to blog.

This is the part where I'd like to whine for a few minutes. Nothing special, just a few things along the lines of wahhhhhhh! Having little kids is hard!!! I don't totally want to stay home 24/7 because I have been working toward this degree since my freshman year of college, way back in 1996, and I am almost done, but sometimes I just want to stay home and forget about the past 12 years. Wahhhhhhhhhh. Also it totally sucks when both parents are trying to get ready for work at the same time. Also, I really dislike it when my alarm wakes up Jack and he won't go back to sleep. This is especially crappy on a morning that follows a night like this: Jack slept in our bed like he usually does (we even have frigging bed rails on our bed because he has rolled out in the morning) and nursed about 64 times throughout the night, meaning I am really cramped and extra specially crabby this morning. Meanwhile, Harry woke up at 12:45 asking if Ben would play with him (and he was hanging upside down out of his fire truck bed at the time). He went back to sleep around--oh-- 3. Just as Ben was settling back to sleep, Harry woke up with a bad dream (about the sock monster. The kid never listens to a word I say, but I make one little joke about the sock monster eating Jack's socks and BAM! Nightmares for weeks), and the only thing that would get him back to sleep was a cup of milk, which, you guessed it again, made him wet the bed and wake up sopping at 5:45. Awesome. (Also, this whole thing is starting to read like one of those "If you give a moose a muffin" books, which proves that the slippery slope fallacy is my main method of reasoning. Wahhhhhhhhhhhhhh! 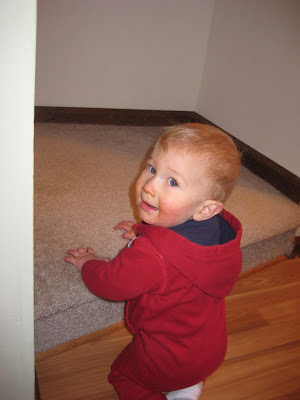 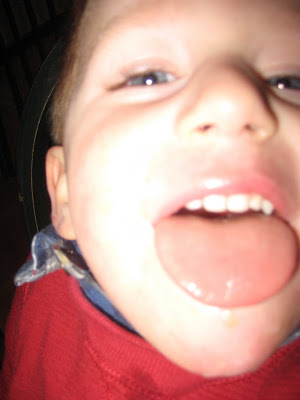 so that I can also enjoy my time with them. 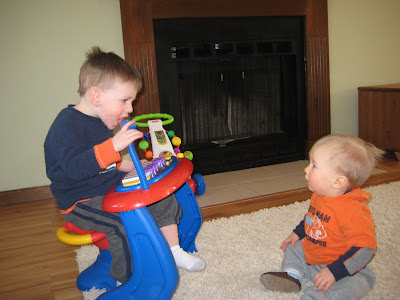 And I am actually feeling good about my project. In some ways, revising is much easier than writing (duh), but it other ways, it is much more difficult. I have to remind myself all the time that every argument I make doesn't have to be cited off to a major thinker because this project is about me finding my voice as a major thinker, you know? I am reading an excellent history of childbirth in America from 1750-1950 (Brought to Bed by Judith Leavitt), and not only is it fascinating, it is also beautifully written. As I read, I am marveling at topic sentences, arguments, segues to subsequent chapters, etc-- all the mechanical things I need to fix in this draft of my work. If you are pregnant or want to be pregnant again soon, DO NOT READ THIS BOOK. One word for you: fistulas. But a lot has changed from days of forceps and chloroform.
Posted by Sarah at 9:19 AM

Sorry the boys aren't sleeping! I am there with the lack of sleep as well for the past two nights. Hopefully all of our kids will figure it out soon and just sleep all night!

Hope the revisions go well even without the marked up copy!

Judith Leavitt won't let me take her class because I am not a women's studies major. I am so boycotting her books. :)

I read that book in college--I took a history of midwifery class w/ Laurel Thatcher Ulrich and she made us read it. I wish I could remember anything about it but the title.