I am so tired.

To say that sleep has been rough lately is an understatement. Like saying Ben's feet are sort of stinky. Like saying Harry's inability to sit at the table for more than 3 seconds without demanding a chocolate popsicle is a wee bit annoying. Like saying I kind of like the coffee and caramel candy bars at Starbucks.

Jack does. not. sleep. And he does not sleep right freaking next to me all night long. He also does this thing where he wakes up at 4 and doesn't whine, knead, eat, and chew his way back to sleep until 5-ish, right around the time my alarm is reminding me to go to the gym.

He cried for an hour and 10 minutes before he went to sleep, and we sat downstairs feeling like assholes.

I think we felt especially bad because we let the nurse at our doctor's office make us feel bad about cosleeping, even though we like cosleeping, and we slept with Harry for a year, at which time he magically started sleeping all night in his own bed and has remained a champion sleeper. The nurse, who visits before the doctor comes in and clicks through a few computer screens of developmental milestones (and was wearing faded black socks with some high-heeled, pointy-toed black pleather mules), made a scrunchy face when she asked about sleeping arrangements, and we said he sleeps in our bed. Then she reminded us that cosleeping with older babies makes it really difficult for them to learn how to sleep on their own and get out of our beds. Which? Bullshit. We know that from experience. I always get totally pissy when people say that to me because it's just a stupid myth (or at least is not true for every baby), and it's usually spread by the anti-cosleeping crowd (not people who don't cosleep, but people who JUDGE PEOPLE WHO DO COSLEEP as if anyone should give a shit how anyone's else's baby sleeps). I thought these people were mostly on snarky message boards, but apparently they spread their snark in real life, too, sometimes under the guise of MEDICAL ADVICE. She said we could ask her for solutions when we were ready to fix that problem. (not the waking up as the problem, the cuddling with our tiny baby in our (AAP- and- Dr. Sears- safe) bed). It would be one thing if she voiced safety concerns (which have been disproven, but still have some sort of medical or baby's well being kind of thrust), but her discussion of cosleeping and later sleep issues was just crap. It's just a screwed up social custom that babies and children should" sleep apart from their parents, not some sort of natural law.

We blew it off at the time, but I think we both kind of thought about it and wished Jack slept elsewhere. Harry, you see, always started the night in his own bed and joined us at his first waking. Eventually, he stopped waking up, so he just spent the whole night in his crib. No crying. No elaborate night weaning process. No training. Jack sleeps in our bed from 7:30 on, guarded by bed rails and a monitor. If he wakes up before we're ready for bed, I have to go to bed right then or at least go to bed and feed him back to sleep-- and I usually just fall asleep then even if I didn't mean to, which is totally screwing with my skin care routine.

So I've started waking him up a little after he eats, telling him night night, and putting him down in the PnP. He only cried the first night, Last night, he rolled right over and went to sleep (like he does for naps). We decided that if he wakes up before 11, we will just "let" him cry. After 11, we're asleep anyway and will just bring him to our bed. I am not trying to eliminate night wakings or feeding right now. Just want a little space for a few hours.

Anybody have any tips for moving him from the PnP to the crib in Harry's room? We don't want to ruin Harry's sleep, but it would be cool to get J out of our room eventually. He's used to the crib because he takes his morning nap there, but he takes his afternoon nap in the PnP because Harry is asleep in his bedroom (thank g-d). Maybe start with naps? Keep in mind that I am napping from 1-3 as well, and I'd like to keep it that way. So, anyway, assvice?

Jack is so totally into peekaboo. It's pretty cute 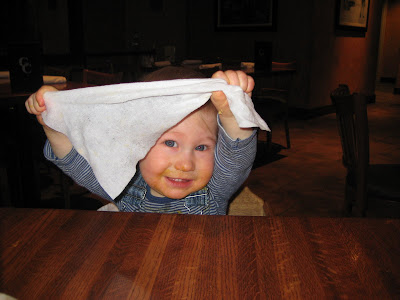 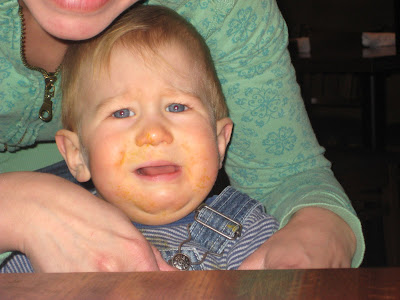 Harry told the waitress he wanted a cheese hangaber (hamburger), fries, and a lemonade. We were kind of surprised, as he's never actually ordered his own meal, and he's only had milk at restaurants-- not even sure how he knew lemonade was an option. Then he ate it all. 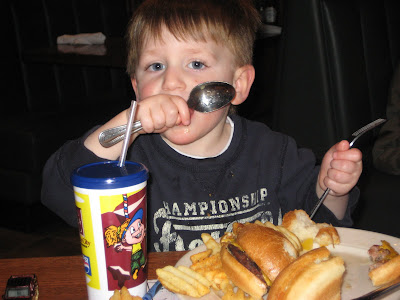 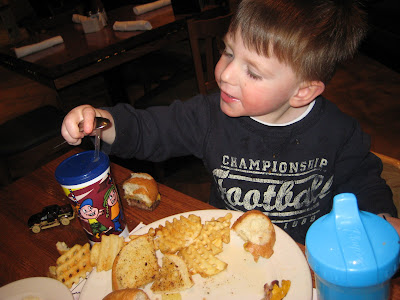 So, I don't have two kids yet - so I haven't had to face the sleeping in the same room issue just yet. But, is there a place where you can have him sleep on his own at night as a transition? I have considered our closet (which is huge) for a transition when we get to #2. We also have a guest bedroom and an office that will work as farther away transitions. The naps might be a good transition as well - would he go down a little before you and Harry? It might mean about 30 minutes less sleep for you in terms of a nap, but it might give you more sleep in the long run at night!

Hi - I am delurking today! I so feel your pain and hope you get more sleep soon! We moved Charlotte into the walk in closet of her brother's room. It worked really well. It was just about a month ago so she was about 13 months.

Good lord you know I have no idea. I will be checking your comments though because I am so tired and out of it tonight after another crappy night of sleep that I am going to LOSE It. Late at night when he is gnawing my nipple off for the fiftieth hour in a row I have sick little fantasies about how much fun cry it out will be. Is that bad? Now I feel guilty.

I'm also delurking today (came by your blog from Stephanie over at Putting on the Hritz :)) Love reading your blog.

Anyway, I have no idea, but feel your pain. My second is only 5 months, but she's a horrid sleeper (just posted about that and the stupid term sleeping through the night last night actually!) and I can only imagine what it will take to get her to eventually sleep on her own.

Hang in there. It has to get better (that's what I tell myself!).

First, the peekaboo is uber cute. Second, H ordering his own meal brought a tear to my eye. And third, tell the nurse, who probably doesn't have any children with the awful fashion sense, to kindly STFU.

I did not cosleep with Jonathan, though I wish I had. I do cosleep with Benjamin when he wakes (and he does) and I'm enjoying it. For now.

You are not assholes though. You are tired parents who obviously love your children more than any parents possibly can. If you didn't, you wouldn't call yourselves assholes.

Jack will eventually sleep on his own, in his own room and, even further down the road, will insist you leave him alone to get ready for bed. So, yeah, that's a ways off, but I try to remember the future when I'm being a tired asshole too.

What Stephanie said. I have no advice because Ethan didn't sleep through the night until he was 2 and we just got him out of our bed at 2.5. But I'd be lying if I didn't say there were times when I was desperate to get him to sleep and sleep in his own space. Now that it's over, though, sigh, I miss it. (the co-sleeping, not the eleventy billion night wakings).

Okay, so the lemonade thing is crazy b/c Ben did the exact same thing around that age. Just all of the sudden ordered a lemonade, when we don't have that home, nor do we order it in restaurants. To this day, he still orders it in every restaurant we go into.

Second, I kept the boys in the same room at this point in time. I put a rocking chair in there, and put them down for sleep at the same time. When Hunter would wake up to nurse I'd go in quickly, so Ben would not wake all the way up. I'd sit in the rocker, soothingly tell Ben, "I'm just feeding Hunter, go back to sleep now." Then, I'd put Hunter back down in his crib when he finished eating. For a week or two it sucked b/c they weren't used to it, but then it got better.

I eventually moved both the boys' beds into another small office room, seperate from their toys b/c they'd play like quiet ninjas after we "thought" they were sleep. But that's a year from now for you...

I loved co-sleeping, but was glad to have at least half the night alone with Theo when Hunter turned10-11 months. Good luck!