In all the preschool excitement, Jack has gotten a bit neglected on the blog-- he's too much of a cherubic little troublemaker to get neglected in real life. Although he does frequently find himself upstaged by Harry. For example, Jack went to the pediatrician for his 9 month check-up on Tuesday, but that visit was nothing special, compared with Hiveman's urgent Friday visit. Jack is still tall (75th percentile) and skinny (25th percentile) with a slightly larger than average head. Just like he has been since birth. No vaccines until his 1 year appointment because he's already gotten 2 flu shots. Blah and wonderfully, perfectly normal. He is eating more and more table food-- he likes YoBaby yogurt, and he is an old pro with bananas. This morning he tried buttered toast, and he likes shredded cheese and tortillas, too. He cruises. Sleeps terribly. Babbles constantly. And his poop smells like real poop-- no more baby stuff.

We totally adore him. 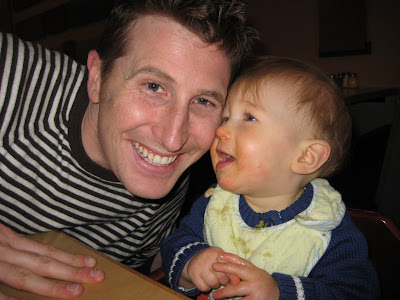 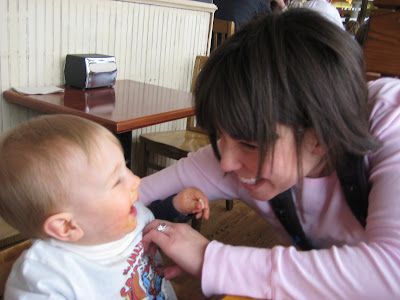 Jack has really reached the age of perfectly squishy delightfulness. I wish I could always have a 9 month-old baby stashed somewhere so I could get it out and play with it every once in awhile. Yes, I know that sounds weird. If Jack slept well at night, he would be the world's most perfect creature.

We even have the same taste in books. 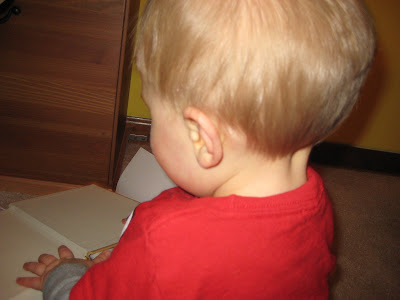 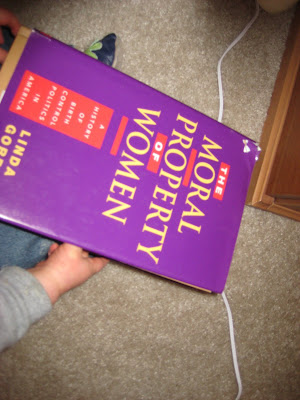 It always cracks me up when he gets a Puff stuck to his face, which is every meal. By do I have a sophisticated sense of humor. 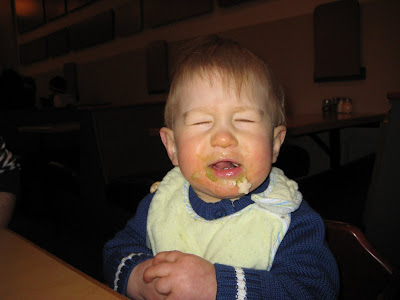 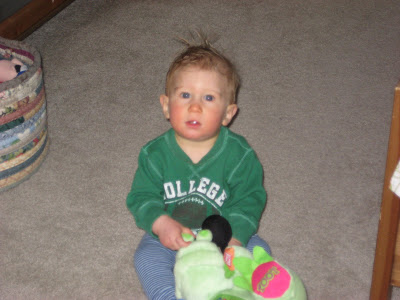 Did you know that nothing in the whole world is cooler than toilet paper? Unless you count the rim of the toilet seat right after your 2 year old brother has peed all over it because that's pretty awesome, too. 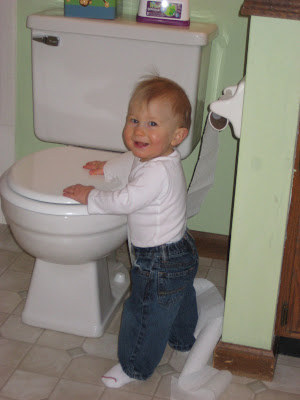 A quick follow-up to my school search: We are probably keeping Harry in the same school-- but that depends if we can get into the class that has music, gym, AND Spanish. I'll know for sure on Monday, and you'll be the first to know in more detail than you could ever want.
Posted by Sarah at 8:26 AM

What a sweetiepie! We are starting to see glimmers of a fun, happy, little baby in Wesley and I am so excited!

Dude, you totally for the two most important things.

1. Jack thinks I am wicked funny...confirms what Harry has been telling me for years (2)

2. He can high five. Now, when we play a heated game of nerf basketball or Madden Wii, he slaps some skin. Kills my hand. Totally meets a high standard in the what to expect the awesome years.

Once they are mobile, they are a lot of fun to play with - until they have a melt down and you don't know why. I wonder why they just can't learn to talk before they get all bossy? Or maybe the talking is how they show their bossiness (i.e. they want to be bossy now, but they can't because of the lack of verbal ability)?

When he was here last time, I swear Jack was trying to talk. He had the intonations down, but we did not understand the words! Our problem, not his!

It's so sad when their poop smells like real poop... I have just a little while longer with Paige 'til we get to that point!

Oh the things we cherish :)

he's so freaking adorable I can't stand it. I love the squishy 9m old phase. Sigh.