It's still winter? I'm getting sick of all the snow.

Good thing one of my New Year's resolutions wasn't to blog more because I would totally be screwing that up, huh?
We just haven't been doing anything.

A little bit of this. 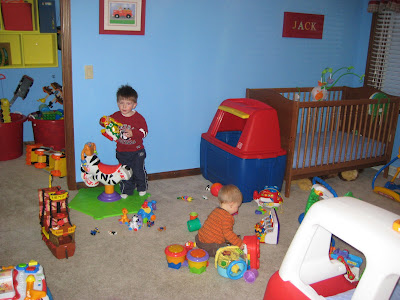 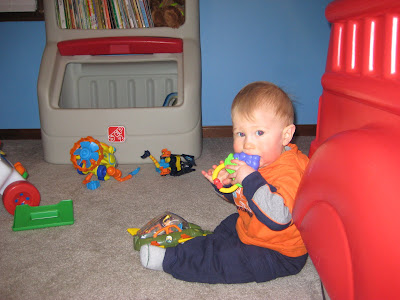 I have been working a few hours everyday this week, and when Jamie first came over after being on break since December 19th, I almost passed out with delight. Then I put on a dry-clean-only outfit even though I was just going to hide out in my office-- in my office where there is no one who wants to wipe snot on me or likes to bite me or poops in his pants for me to clean up-- and made it to campus in record time. I met Ben at the Starbucks by our offices for lattes that we could get hot instead of iced because we didn't have to carry in babies in our other hands. Then I climbed the stairs to my messy little office and took care of some mind-numbingly boring paperwork in the most blissful solitude. Even the cackling of the theater people whose department mailroom is across the hall from my door didn't disturb me.

Tonight after dinner, Ben and I were putting away the day's laundry while Harry let his super hero action figures hang out in the Little People house, and we were like "Hmmmm...where's Jack?" 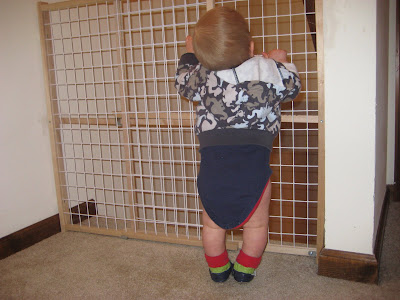 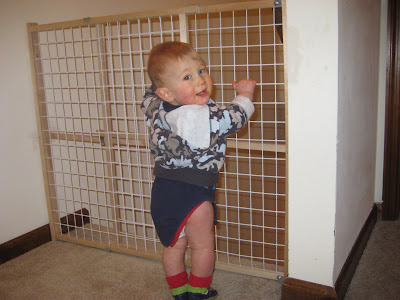 Cleaning up the boys' room, Ben hurled stuffed animals at me 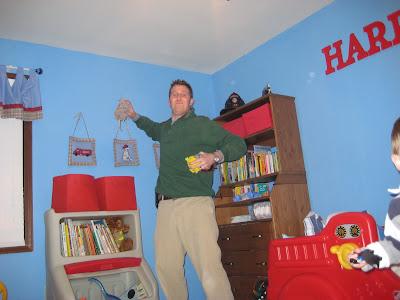 So I flung Harry back at him. Not really. Also, don't judge me: I went to the gym on my way home-- those aren't really my real clothes. 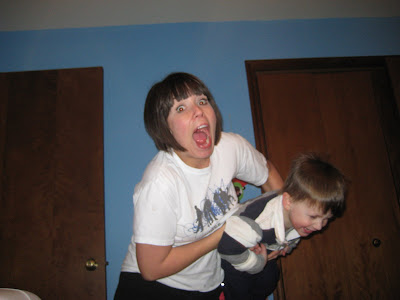 So, yeah. Not a lot happening here. Last semester when I got done revising the giant master syllabus that I hand out to my staff at the beginning of the semester, I apparently didn't save it, so guess what I'm doing tomorrow? I'll probably also be building some train tracks. Expect more fascinating updates soonish.
Posted by Sarah at 8:27 PM

This is really cute! Is Jack's hair growing in really THICK all the sudden, or what?

Look at him standing up! How cool. He has grown up so fast. Wesley giggled last night and I nearly wept with happiness that this newborn phase is almost over.

Your job sounds perfect. I am jealous. Also jealous of the coffee date sans kids!

Sounds like some good days (even if it is cold outside). Get ready for some more Jack-proofing! Desks will not longer be safe soon!

Jackie is letting no grass grow under his feet..just started crawling forward and already up on his feet.. now you'll really have a three ring circus at your house...Bomma