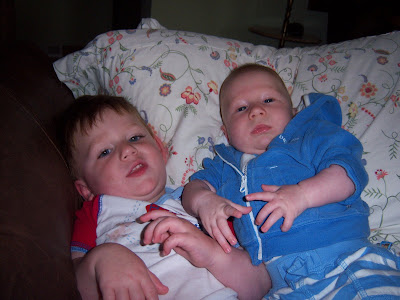 Ha ha! They're both all weird and doughy.


Jack totally looks like a half-stuffed Build-a-Bear. He's all fat from the diaper up (and a little in the thighs), but his arms and legs are still on the scrawny side.

Let's talk about how much I love him. I'm not going to lie, it was a little rough there for the first few months, but now that we're past the dread 4th trimester, he's pretty okay. Nice, in fact. Dare I say, happy?

When we visited my parents a couple weeks ago, he was still a turkey-sized pain in the ass-- only happy after 5 pm if I was holding him, etc. Recently, though, he has started to develop his own little schedule, including an early morning nap, a mid morning nap, and a really long afternoon nap. He wakes up between 3 and 4, and then he has his longest period of awake time, until 8:30 or so, at which time he eats and then sleeps (sometimes not even on me) until 2 am. Which, technically, is sleeping through the night, but I remember that definition confused the crap out of me last time, too. 5 hours in a row is sleeping through the night, but whose night is over at 2 am? Not mine by a long shot.

Anyway, he's still turkey-sized, but more of a succulent, roasted, dressed, and trimmed turkey, you know? Which is to say, not a pain in the ass but a delight. Even a culinary delight, since I spend most of the day nibbling his legs and toes. Weird, I know, but somehow unavoidable.

And yay! The Bumbo chair! Someplace else to stick him! With Harry, I was all holier than thou about containing the baby, but he still got a wicked flat spot on the back of his head. With Jack, I am all about containers, but his head is round and smooth. Weird, huh? Also, my god will the kid ever have any hair? Or just an orange glow forever? 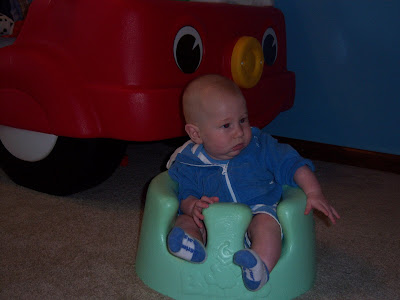 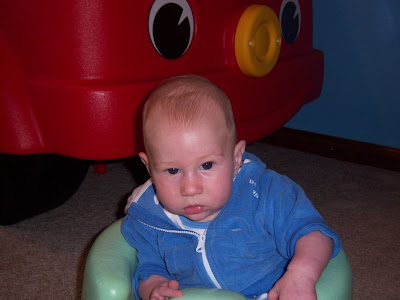 Stop taking all my toys, damn it! 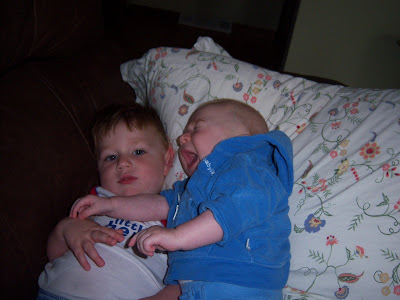 That's it. Bring it on, big brother. 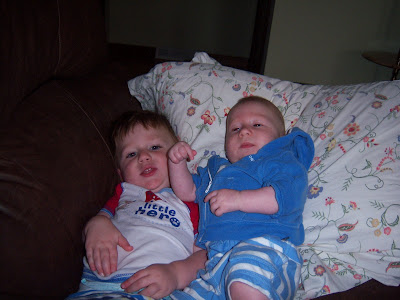 Glad to hear there are others that weren't born with a head of hair!

I'm so glad to hear he's eased up on you guys a little! He sure is cute.

Look at all that squishy, yummy goodness!

Since when did Jack get so big? Wasn't he just born, like, a few weeks ago?

Definitely happy for you both that he's relaxed a bit. I couldn't imagine the stress that would put you under.

We're still waiting to see if we've been cursed with it. Cross your fingers for us!