There are just SO MANY.

1. Freaked out about a 5 hour road trip peppered with possible severe storms and did not got to Des Moines as planned. Instead, we went to see my parents, which was not dumb (was actually very enjoyable), but I

2. Forgot my camera!!! Which was not only stupid but also sucky, especially since I saw a pregnant Katie for the first time and would have loved to take pics. Let me just tell you, she looks lovely-- she really is glowing-- and had on very cute maternity clothes and a fabulous pedicure.

3. Took a bunch of pics on my mom's camera (not stupid) but cannot access them from the SD card on which they are saved (stupid).

4. Broke my toe (I think) last week by stubbing it on the corner of Ben's dresser, an event that completely traumatized Harry, who now kicks his bed and screams, "Oh ow! My toes hurts! Ow!" while jumping around his room. Props to me for not cussing like a sailor, huh? Ask Harry what happened to mama's foot, and he will says. "Mama has bum foot. Hit on Daddy's corner. Mama jump in my room." The he will launch into the bed kicking routine and may even demand a Diego bandaid. That's his new thing-- he covers his arms and legs with so many bandaids that strangers ask him if he's been in an accident. Nope. All for show.

5. Crushed my phone beneath the pedals of the StairMaster at the gym yesterday. I can't use the treadmill because of the aforementioned toe. I don't feel like I am burning any calories on the bike, and the elliptical is no fun. So, I thought I'd try the StairMaster, which I haven't used since the mid-90s. I dropped my phone mid workout (much to the relief of the person next to me, I am sure), and I thought to myself, "Don't step on that when you're done." A mere 6 minutes later, however, that thought was gone from my head, and I completely crushed the whole damn thing. It won't even turn on. So, I took that as a blessing in disguise because I have been wanting an iPhone forever, and the new ones came out last week (to mixed reviews and a bunch of server problems, but they look so cool). We rushed to the mall only to find the Apple store sold out of all but the 16 gig white phones-- not my first choice, but I still got in line. But the salespeople there are such freaking douche bags that I could not stand it, so I went to the Verizon kiosk and got a Blackberry which is so awesome I wonder how I've lived without it for the last 30 years. Seriously. Ben and I message back and forth using our Blackberry to Blackberry network ALL DAY-- even when we are in the same room. How dorky is that? And today, when we went to the sandbox, I cold email him pictures of Harry and Jack, and it was like he was right there with us only he didn't get dirty or sunburned. Do yo think my smart phone feels like it's not living up to its potential?


Harry in Jack's bouncy-- and in his cute Helicopter PJ's that Grandma bought (yeah-- we keep the house so cold the kids wear winter jammies, what's it to you?) 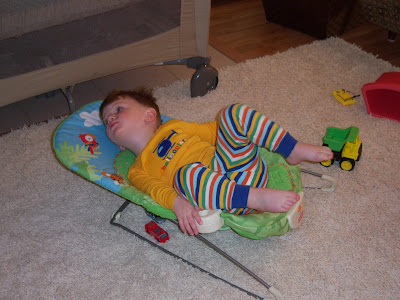 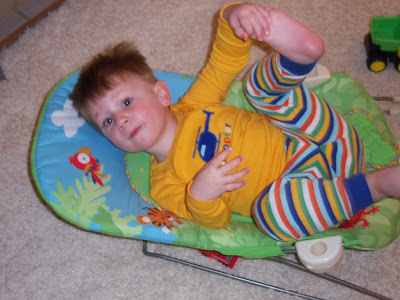 Harry was so good during the phone debacle that I asked him what he wanted to do that would be fun, and he replied, "Harry make a the teddy bear." So, we went to Build-a-Bear where he actually made an elephant (whom he dressed in a hard hat and a tool belt, snicker snicker) 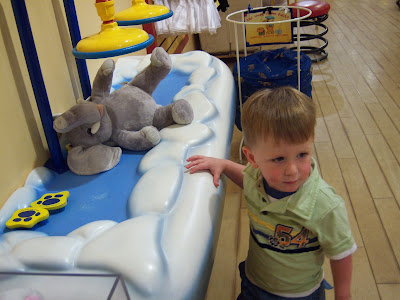 Looking for the animals he was sure were hiding in the bushes-- he's kind of a weird kid like that. Last night, Ben couldn't find the orange plastic dino Harry sleeps with (who was hiding under the covers), so he looked in Harry's toy closet. I caught him coming out of the closet looking worried (because the kid won't sleep without that dino) and asked him what was wrong. Harry immediately caught the worried vibe and said "Tornado? Goblins?" 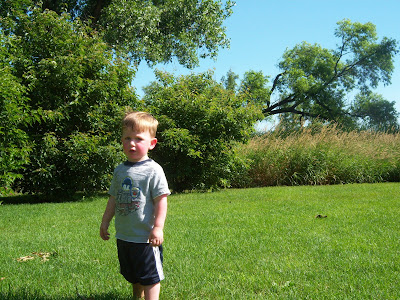 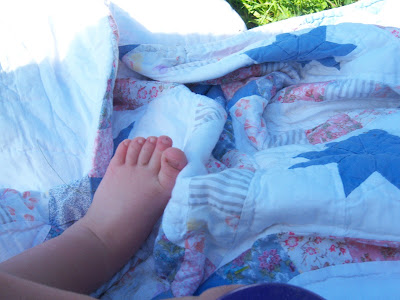 Jack had a good time, too, minus the sand but plus a whole mess of links. 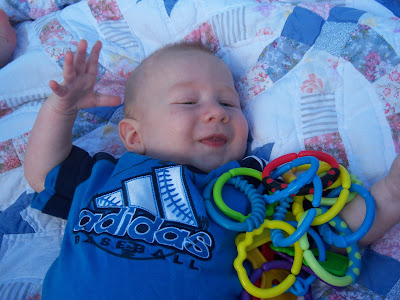 Oh! Congrats to Stephanie who had her little boy!
Read this post by Jamie, especially if you are a stay-at-home mom because yeah. That's so how it is.
And who else is jealous of Sarah and Ethan's beach bum status? Because I sure am!!
Posted by Sarah at 2:13 PM

Hahaha "Tornado? Goblins?" AWESOME. What a funny kid he is! I am jealous of the beach bum status for sure. Especially because cold water sounds freaking awesome from where I stand in pregnant 99 degrees 60% humidity land.

Yeah, we so should hang out.For real. I'd invite you over, but you know how dirty this place can get I'm embrassed. You can come over if you want to though... Or a neutral location? How about that fun play place you mentioned before?

OUCH! I'm so sorry about your toe!!

I am terrified of the same thing; we just bought a new bedroom set and have an actual bed frame now and I swear, it is just lying in wait for me to crack a toe or shin on it. Can't wait!

I hope it's feeling better soon!

And how cool do I think you are for still going to the gym with a broken toe??!! That would be my excuse to lie on the couch for weeks! (this may be while I am chubby 2 years after the birth of my child...) You are a rock star!