Sunday-- and then we had sundaes

Ben and I are uptight about different things. For instance, I am pretty insistent on keeping the house clean, and he freaks out a bit about safety. So if Harry were hopping on one foot down the stairs carrying a sippy of grape juice, we'd both gasp and lurch-- Ben because of the stairs and me because of the juice.

But the above scenario would never happen because Harry doesn't drink juice.

One thing, though, that we are both completely relaxed about is food. Recently, I have seen lots of toddlers and their parents struggling over food. I know someone who can relate her child's entire menu from the previous day, including portion size and the amount of food that actually crossed the kid's lips-- in front of the kid. I have heard more people than I can count bartering with their kids ("Take 3 more bites of fruit and you can play.") or giving really specific food instructions ("Eat another bite of chicken before you have that pretzel."), and I just wish they could chill out before they seriously screw their kids up.

I think the most important thing you can teach your kid is to eat when you're hungry and stop when you're full. Offer lots of healthy food at every meal, and then relax.

Our biggest food "rule" is no juice-- we never buy it or offer it, but occasionally he'll ask for some (because all the kids at the gym daycare drink it), and we'll let him have it because we don't want him to turn into that kid who drinks 6 gallons of juice every time he goes to a friend's house. I also have no problem with dessert (actually, I have a huge dessert problem, but I'm trying not to pass on my issues--- mmm, pie).

I know this soap box rant comes out of nowhere, but I am just tired of witnessing food struggles. People talk about how they sneak veggies into their kid's diet, and I get so annoyed. Maybe if veggies wee a normal part of every meal, kids would just, um, eat them, you know. Or not-- at least not all the time-- and that's okay, too.

I'm not going to lie: sometimes the only part of breakfast Harry eats is the butter on his waffle. At lunch, he ignores his cucumber slices and subsists on Goldfish crackers and bup. For dinner, he licks the French dressing out of his salad bowl and treats his spring greens and grilled chicken like they're poison. But that's not an everyday thing. Although right now, he's in a very intense banana phase, which is weird because he was on a banana strike for about a month.

Life with a 2 year old is a big enough pain in the ass. Why make meals stressful?

Here we are chilling out on Sunday at one of our favorite restaurants. 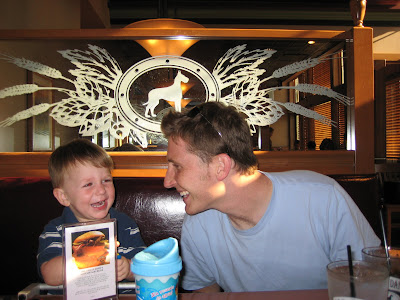 ONe of the only shots without my boobs because Jack was hungry, too. On a related note, there was a letter to the editor in our paper last week about the inappropriateness of breast feeding at restaurants, which confused the crap out of me. Aren't restaurants places where people eat? Is it also not cool to give a baby a bottle at the table? Also, there is no freaking way I would ever in a bajillion years breast feed in a public restroom. As if. 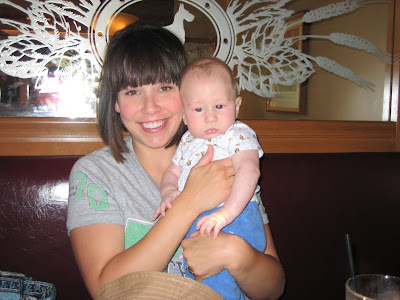 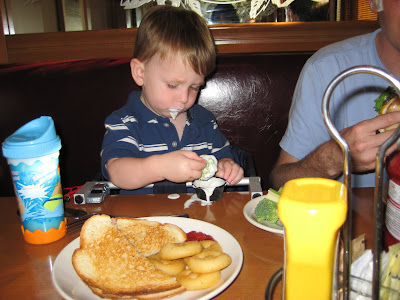 So he used his broccoli as a big leafy spoon from which to suck ranch dressing-- c'est la vie.
Posted by Sarah at 5:52 PM

Absolutely! We serve up a nice plate of roasted chicken, applesauce, peas and carrots, and whole grain bread and then hang on for the ride. Our rule is you only get more of one thing (applesauce, always applesauce) if you have tried everything else. Otherwise the kid would subsist entirely on fruit. He's a big juice fan, but I usually dilute it and then switch him to water if he wants more. So far he's not onto me. Knock on wood.

The only time I ever saw him eat brocoli was when it was brocoli tempura. I don't know how you do it.

My niece and nephews (well, 5 out of the 6) have food issues. But, they only barter for dessert. They didn't start the bartering until they were at least 3 - if not 4 - because the kids just didn't eat much. As the doctors told them - no kid will starve themselves.

As for juice - I am a huge juice drinker! I think the thing is to (1) make sure it is juice and not sugar loaded stuff, and (2) limit the intake. I do agree that water and milk should be the primary liquids though.

I don't think this is sanctimonious at all. Some people eat more processed junk than others. Little kids have fewer teeth and less saliva, so they like things that are partially pre-chewed (processed). As long as kids see and are offered a variety of food, you're fine. I don't like juice. I would rather have them eat the fruit or vegetable and get some fiber.

Amen, sister. The only thing I've learned is that Ethan gets overwhelmed if you put too many different foods on his plate @ once. If we put the plate Becca described in front of him, he wouldn't eat any of it. But one or two of those things @ at a time--he'll probably end up eating it all. It took awhile to figure that craziness out. The stinker.

But we've stopped fighting it. I get him to drink a 12oz Jamba Juice of blueberries, strawberries, yogurt and soymilk every morning now and I'm thrilled.

it's been a bit more of a struggle for us b/c Ethan's not even on the weight chart--our pedis have pressured us to some degree to force the food issue, but I refuse to make it a source of stress for him and create an unhealthy relationship w/ food.