We had a lovely 4 day weekend last week (well, everyday is a weekend for me, but Ben had 4 days off between his old job and his new job, and I got to do things like shower by myself and fold laundry with 2 hands), which means I have tons of pictures. 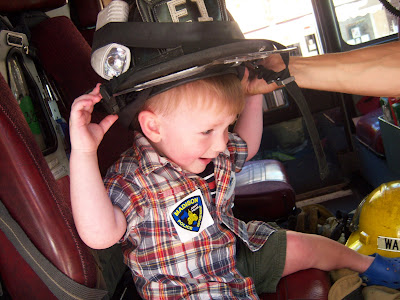 We went downtown to see Ben's new office (awesome) on Friday, and not only did a police woman turn on her lights and give Harry really cool sticker, but a fire truck pulled over to the side of the road and the firemen let Harry climb inside their truck and wear their hats. ( Randomly awesome.)
And we saw Bucky-- could it get any better? 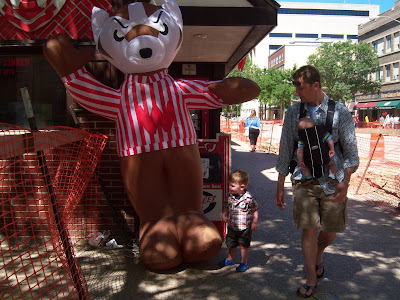 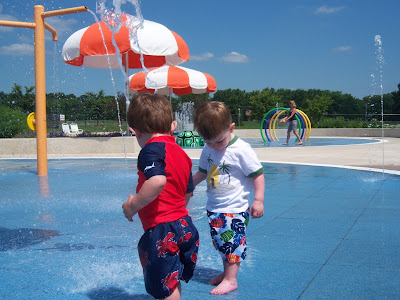 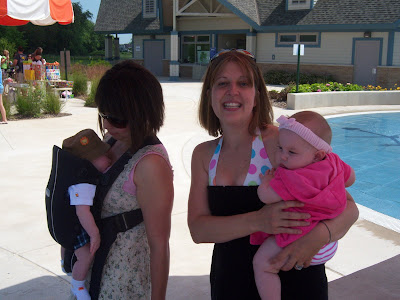 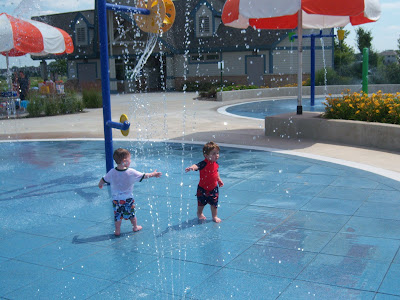 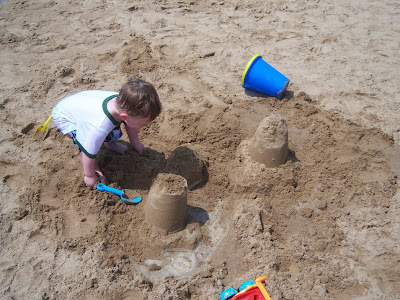 As always, Jack was a fireball of fun 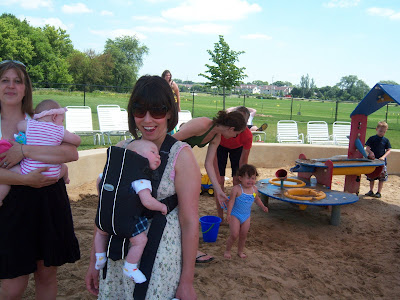 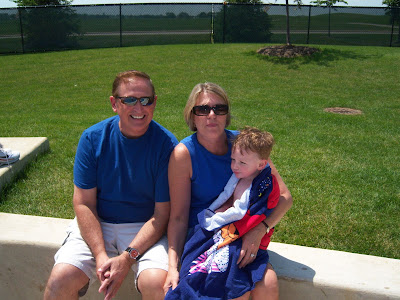 He still doesn't take requests, even the oft made one to stop screeching. 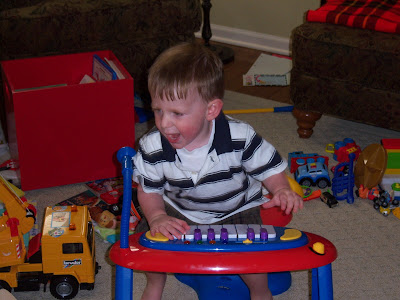 So I clearly have too much time on my hands-- here are some cupcakes I decorated to look like corn on the cob, complete with a melted yellow starburst for the butter. Also, here are Harry and Max, who look even more delicious than my cupcakes. And you might think that frosted jelly beans would be gross. You'd be so wrong. Hmmm, anyone surprised I have to get a cavity filled tomorrow? 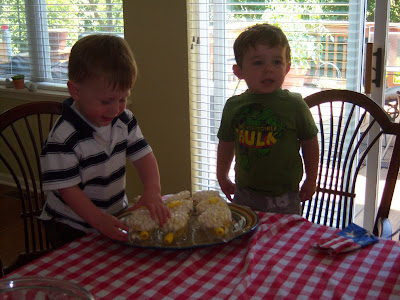 Jack was totally cracking Lucy up-- like seriously, the sight and touch of him sent her into paroxysms of laughter. I imagine their little exchange went something like this:
Lucy: Ooooh. What is this little thing? He's kind of cute.
Jack: Are you laughing at me?
Lucy:He he he he
Jack: Seriously, what's so funny?
Lucy: He's squishy. Like bananas 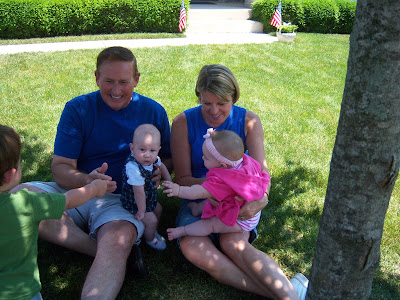 Jack: This humor is a little pedestrian, no? 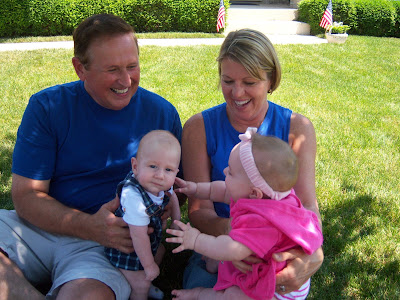 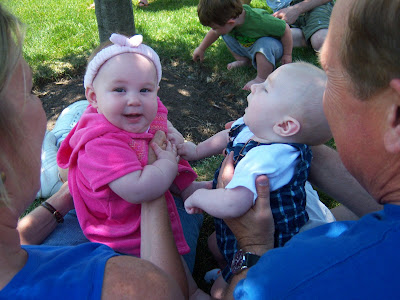 Harry celebrated our country's Independence Day by asserting his sovereign dominion over his grandparents' front porch. Then he gave the best 4th of July oration since Frederick Douglass. I mean, really, what to the toddler is the 4th of July? (ahhh, rhetoric jokes. hi-freaking-larious) 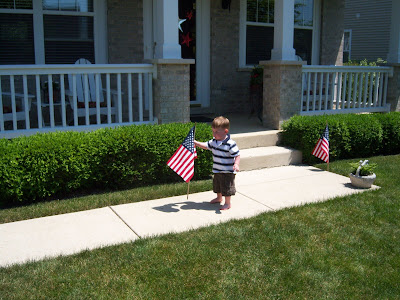 Thanks Auntie Jen and Uncle Maurice for this stylin' robe. It even has his name embroidered on the pocket. Now we can stop stealing from hotels. Ha! Like we stay in hotels that have robes! Ha ha! 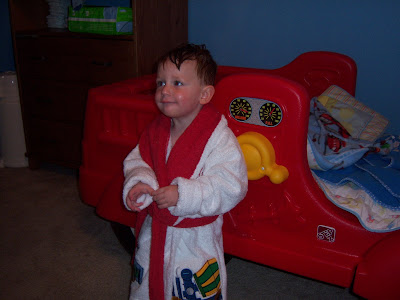 Yes. That's a licensed character UV-blocking t-shirt. No, I don't like licensed character clothing, either. But for some reason, all the stores are closing out their summer stuff, even though it's still summer, so the pickings were slim. I mean he could have worn a corduroy puffy vest over his swimsuit, but that seemed slightly impractical. You notice he's grabbing his ear in this picture. Well, he keeps saying "Harry's ears hurt. Call doctor, Mama." So we took him to urgent care and there's nothing wrong but he is still the boy who cried ear. Any ideas?? 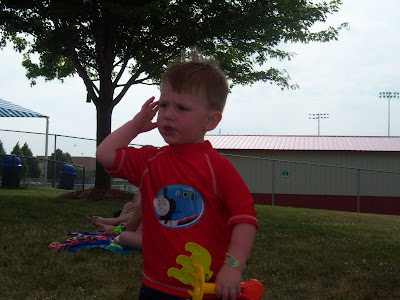 Here's Jack hanging in the shade, totally UV-blocked in his hat, shirt, and trunks-- all for show, by the way since he is way to young to hang out in what is surely e coli infested water. Harry? Giving the old immune system a workout, one mouthful at a time. 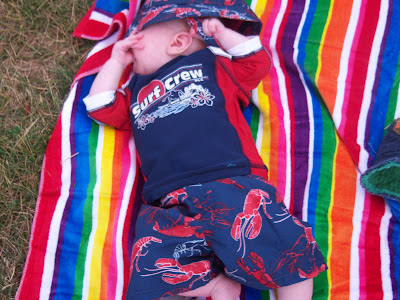 He looks like he's smiling, but he is actually saying "Harry's nakey," which is not entirely true. He was wearing a diaper. Also, next time we'll remember to pack dry clothes, 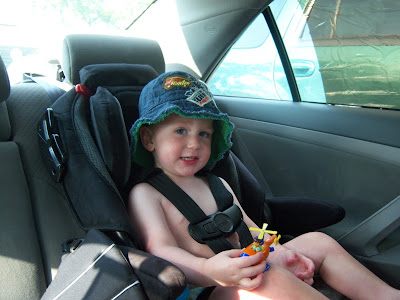 Anonymous said...
This comment has been removed by a blog administrator.
7:47 AM

I can't believe I'm the first with comments about your wonderful blog entry from the weekend...everyone looks great, and Jack does't even look grumpy, but he sure does look like Grandpa J...Bomma

fantastic! I love that last picture! I have started teaching Ethan to say "nakee" b/c it cracks me up!

Are there some new pics on here? My Google Reader let me down. Looks like lots of fun!