Ben took a picture of his dad installing our new kitchen light fixture yesterday afternoon, and our camera broke!! Which sounds like a joke, but actually happened and is a major bummer because we have all kinds of cute pictures on there-- Harry withBen and Hunter on Friday, Harry and Jack and their grandparents from yesterday, Harry in his adorable new fire fighter costume that his grandparents brought him (along with about a thousand other toys and some really cute jammies-- it was like Christmas in July, and they installed a new light? Could it get any better? Oh wait-- yes it could-- they let Harry drive with them from the farmer's market to our house, which means THEY got to enjoy his nonstop, increasingly loud and repetitive monologue about the sights and sounds outside his window, which of course we love, but absence makes the heart grow fonder, you know?). And, to make matters worse, today is Josephine's birthday party which is sure to be picture worthy.

So, we're off to get a new camera ASAP-- since our old one won't be fixed for a couple of weeks. Until then--some pictures from my phone: 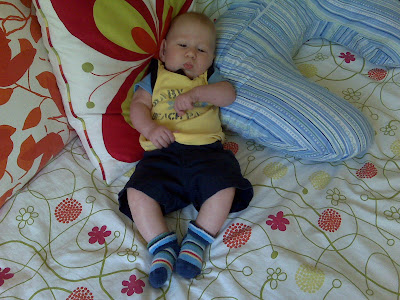 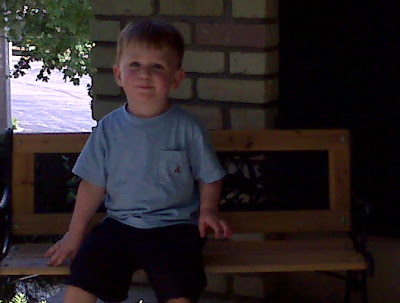 I feel your pain; we were faced today w/ Ethan's first pony ride and only the piddling camera in Husband's phone to record the memory.

My pics from our gym adventure are terrible. I was too busy having fun to get any decent shots. :(

My camera broke a few weeks ago, too, when I fell, and it felt like a lost a kid or something. Well, maybe not that bad, but it did suck.

So we need to set up another play date b/c that was way too much fun!!!