Instead of hunting eggs, we searched for spring. No luck. 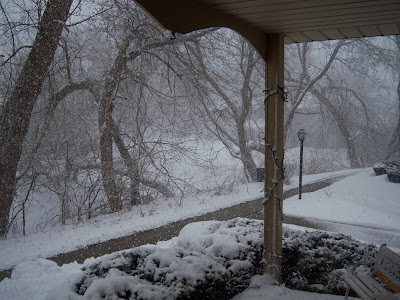 Oh, and your typical Easter morning snow man. He tastes like sadness, apparently. And might need a hug or a whack in the facebody 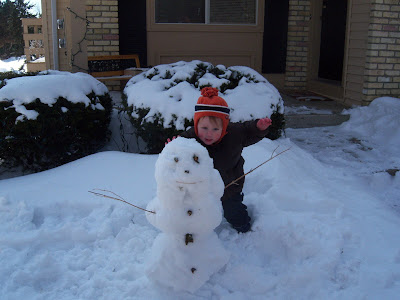 No? No freaking Easter blizzard where you live? Oh. Well screw you then.

How about this? Was your toddler a little jerk on Easter? Because ours was. Greedy McGrabbyson was, apparently, expecting a Christmas-like show of gifts and was totally disappointed with his baskets of trinkets. He didn't even really play with anything until he made sure there were no more presents. And, okay, his gifts were a bit odd. Nothing to do with Easter really, or even spring. No candy, either (because he's only 21 months old, and I have lost count of how many BAGS of Cadbury mini eggs I have eaten since February. BAGS, I tell you). But still, it's always nice to wake up on a random Sunday and hear that some giant rabbit, who can apparently walk upright, use his thumbs, and resist the urge to crap pellets all over your floor, snuck into your house while you were sleeping and hid toys for you, right? Maybe he was crabby because he peed through his "Chicks Dig Me" Easter jammies and we put him in some footie pajamas that fit him like a fleece body condom.

The Easter Bunny hid this bubble-blowing lawn mower (which, seriously, he thought Harry could use outside because it's nearly April for crying out loud) in our room, hoping to buy us a few more minutes of sleep. He also left the box, thinking Harry may want to play with it. All Harry wanted to do, though, was look in the box for "Mo' ho ho ho" and stain our carpet with bubble soap. There was a cute moment when he pushed the lawn mover into his room and noticed it was blowing bubbles-- he came running back to use screaming "Bubbleth!" 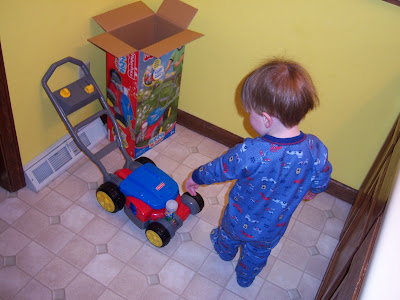 Look, he had his hands on his hips as if to say, "I ran all the way down here for that?" as he inspected his first basket. 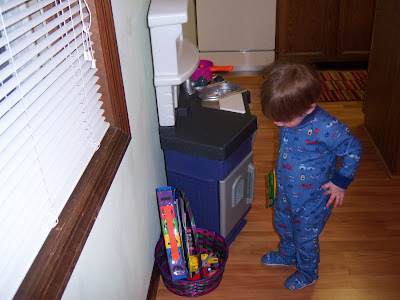 When he saw Clifford, he started to be marginally more okay with the day Once Ben showed him how to work the helicopter, Harry was a big fan of his new man. We lost Mega Blocks man a while ago, and it's been rough. 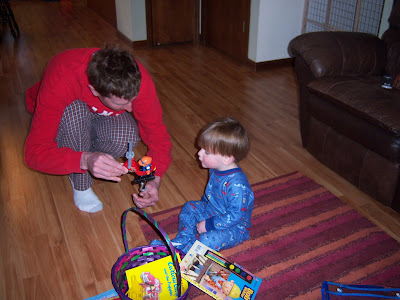 He found his other basket, which the Bunny hid in his house, sneaky bunny. He was slightly mollified by this discovery, as the basket contained slighty bigger toys (that is, toys that took up more sapce-- still cheap as hell) Also? Harry's house is really dirty. Like, needs to be vacuumed. Actually what it needs to be is moved the hell out of our living room. There was a Mr. Potato Head in this basket, and Harry loves him, especially if his arms are above his ears. He loves Mr. Pot Head so much that he diapers him. 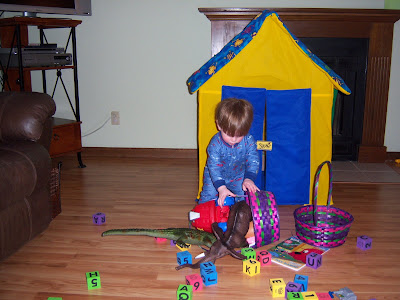 "What do you mean you smell poop? Did you ever think it's Dada? Back off, lady. I'm making art." 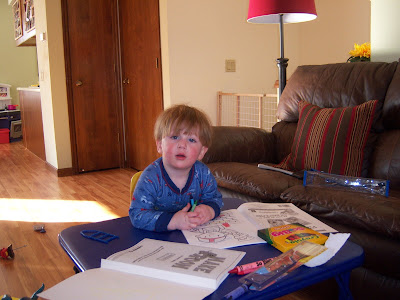 I'm going to be laughing about "fleece body condom" for a while. Probably at inappropriate times tonight while we are out for dinner with friends. My goodness.