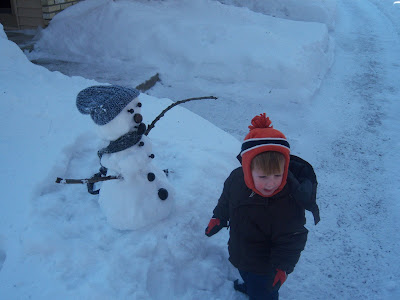 Ben and Harry played in the snow last weekend, and Ben certainly builds a way better snowman than I do. His has distinct body chunks instead of just one pointing mound of a body. Also, Ben lent his hat to Harry's new mo-mo because Harry will still stare out the living room window and tell the sad tale of his previous mo-mo whose hat blew away. He says "Mo-mo. Hat? Hmmmm. Way!" and flings out his arms as if to say "This hat could be anywhere. Why am I the only one who thinks we should look for it?" Also away? The cute wooden carrot-shaped nose, but Harry doesn't seem to care about that. I, however, am a little peeved.

This mo-mo comes with a much happier tale: "Mo-Mo hat! Dada!" And I have to say, "Wow, Harry, your daddy gave the snow man his hat. That's so nice." To which Harry will reply "Yep. Dada. Nice."

Also, it warmed up this week a little, and the snow man is a puddley mess. Note, don't encourage your toddler to look at his melty snowman because this might be traumatic. 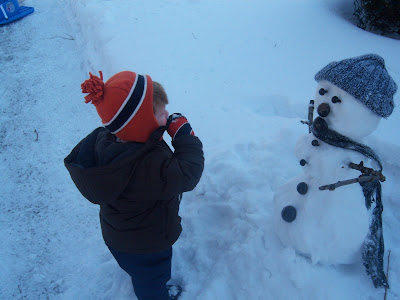 Oh look! A snack on his boots! Handy. 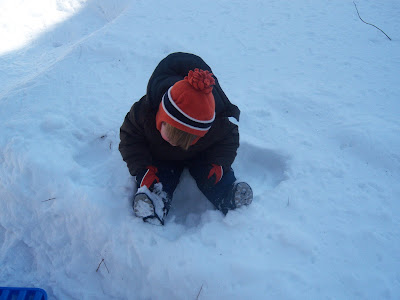 Yep. He's eating the snow off of this sled. Yummy. 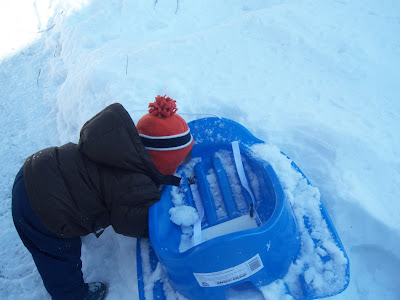 As you can see from this video, Harry spent most of his outside time tromping around and munching on snow. I wish I had video from his previous winter outings because this was the first time he could actually walk around without constantly biting it. Impressive. Next winter we'll break out the skis and the snowshoes. Unless we've moved to Arizona in protest.

this post makes me so sad that we got NO snow this year in DC. Well, there was one day where it flurried, then sleeted for 12 hours. That kinda sucked. I grew up in NH, so I miss me some snow...

Is it safe to eat snow? Apparently, Harry is not bothered at all.... I have played the video in which he says his name about 100 times so far! It's so cute.

Haha snow buffet. What a cutie walking around all bundled up! We got no snow this year and that is the way I like it... but it would have been fun to watch Charlie enjoy it.