"Hi, I'm Harrison Benjamin, and this is Clifford, my big red dog."

That title is probably only funny to the parents of toddlers who love Clifford. Because the show starts (as do all the books-- books-- we read lots of books-- it's not all TV for us-- books, books, books) with Clifford's BFF saying, "Hi, I'm Emily Elizabeth, and this is Clifford, my big red dog."

Anywho, Harry has loved Clifford from the moment we first exposed him to the wonderful (quasi commercial-free) world of PBS Kids. I'm not sure why, but Harry has always been attracted to the big red dog. Before he could really say a lot of words, he called Clifford "Woof Woof," and this is still the name he uses most often. He calls other dogs by their names (like Harry the dog of such classics as "Harry the Dirty Dog" and "Harry and the Lady Next Door." On side note, we buy Harry almost every book we can find with the name Harry in it-- is this confusing him, do you think? The other day, we got a book at the library called "Imagine Harry" about a kid whose imaginary friend is named Harry, and at the end of the book, he realizes he doesn't need an imaginary friend, and Harry disappears forever. Do you think this freaked Harry out? )

Yesterday, Clifford was at our Barnes and Noble for a special costume character story time. Of course we went (and the person inside the Clifford suit looked warm. Really warm). We tried to tell Harry for a couple of days that he was going to see Clifford at B&N, but he just thought there'd be a TV there, and he didn't seem too excited. He was stoked to see some stuffed Cliffords on a table in the story area (and yeah, we bought one because we're suckers), and he obligingly looked through the Clifford books they story lady got out.

But oh my god. When Clifford shambled through the employees only doors, I thought Harry was going to crap his pants. (Which, now that I think about it, is a phrase that is more dramatic when used to describe surprise in someone who doesn't routinely crap his pants, huh?)

At first, he just looked back at us like "Are you seeing this? What the hell did you slip in my yogurt this morning?" 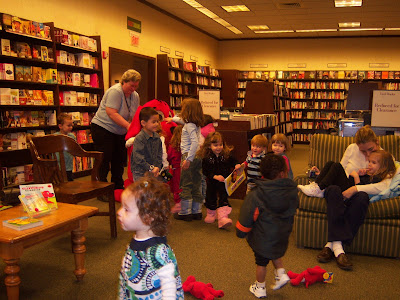 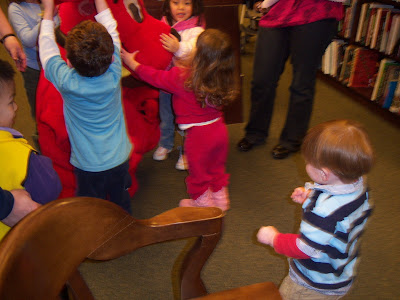 I walked up there with him, and he touched Clifford's paw with one careful finger. Then he said "Itch." 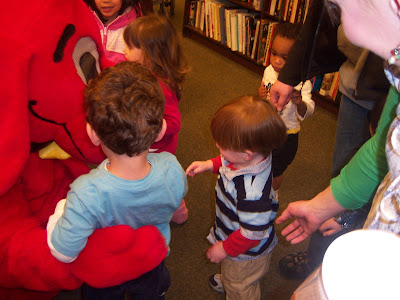 And he pretty much just stood there like a zombie while the story lady read two Clifford books. Ben was getting all blotchy because he wanted Harry to sit down and quit blocking kids' views, but I was practically crying with happiness because Harry was so blissed out by the whole experience. 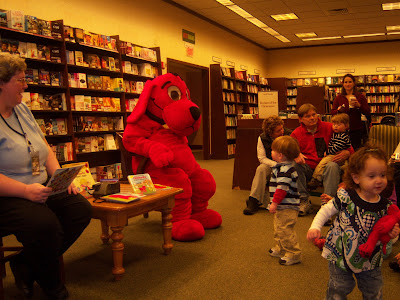 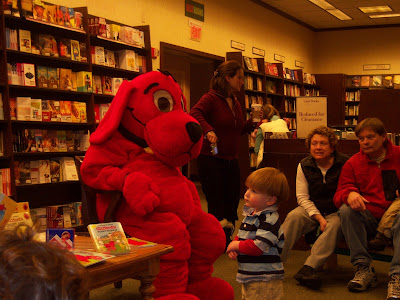 Since we were the rude assholes who didn't make our kid get down in front, other parents let their kids approach Clifford, too, and Ben felt way better. 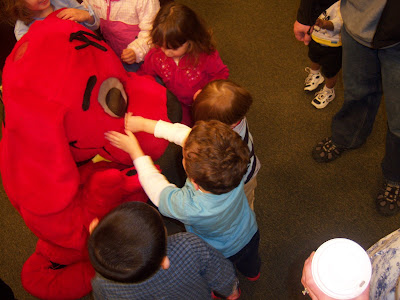 I love this video (and Josephine is so not into Clifford because she really loves Sponge Bob and no other), but it doesn't quite capture how adorable Harry was. Once he warmed up a bit, he kept running back to us and saying "Mommy! Daddy! Woof Woof!" while gesticulating wildly at Clifford. He grabbed his sippie and waved it in Clifford's face, saying, "Bup, Bup!" He made sure Clifford saw his friend ("Woof, Woof? Jean-Jean") and his dad ("Woof, Woof? Daddy") in a very Oprah-Uma way.

Then he got bored and announced that he would like some Choo choo, where he joined an army of toddler boys walking in slow open-mouthed circles around the train table saying Mine! Choo choo! Mine! (He also picked out a huge pile of stuff he wanted and put it on the floor by us, telling us "Home.") 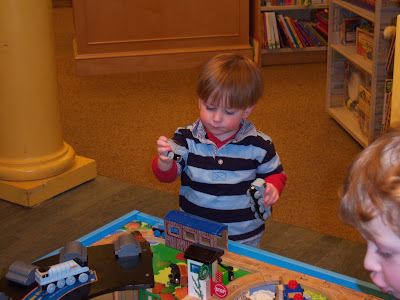 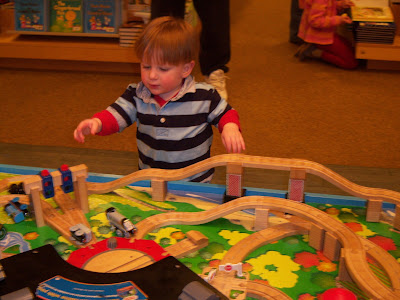 When it was time to leave, he acted just like the little girl Trixie in Mo Willems' "Knuffle Bunny" and "went boneless." 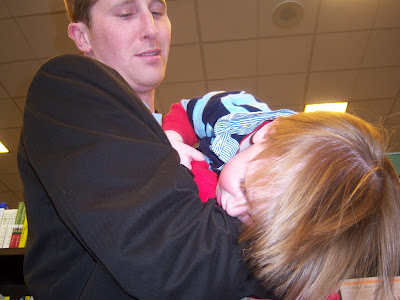 He recovered use of his limbs by the time we got home, and the first thing he did was offer Clifford a ride in his car. True love. 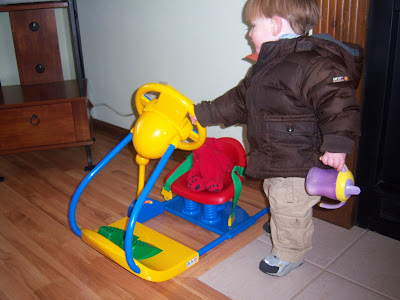 I can hardly wait for the Tripod gang to see this blog...wonderful....Bomma

Oh what a great post! What a happy boy! Adorable.

How exciting to meet the big red dog in person!!

btw, here's a tshirt that i just thought of you and your soon to be offspring...http://www.snorgtees.com/iammclovin-p-406.html