Does your toddler hoard things?

Because ours does. He's a major hoarder. At Little Gym, he spends ball time gathering balls and placing them at my feet. He'll knock kids over to get their balls-- not embarrassing at all, huh? A couple weeks ago, the group activity was to play with scarves, and all Harry did was run around the gym gathering scarves. And by gathering, I mean snatching them out of the hands of other kids and their moms-- he stole from moms, too. At home, he hoards tons of stuff-- spoons one day, wash cloths the next. Socks sometimes or bottles of shampoo. He gets very attached to these objects and calls them Harry's. Another hoardy thing he does? He asks for more even when he's not done with whatever it is he wants more of, mainly cookies and berries, although he did hold his 4 new flip flops to his chest yesterday morning and ask for more of them, too.

The hoarding goes along with the not sharing. At Old Navy the other day, a little girl tried to sit on the bench in the kiddie section, and Harry screamed "Move!" and tried to pull her off. When she put her hand on the bench's rail, he peeled her fingers off one by one. Yeah. We spend a lot of time talking about nice hands these days. Also communism.

We wet to an open gym last Saturday, and he was all about gathering and hiding balloons, balls, tennis rackets, bats. Then other kids would come along, and he would scream "Mine" and dissolve into tears. 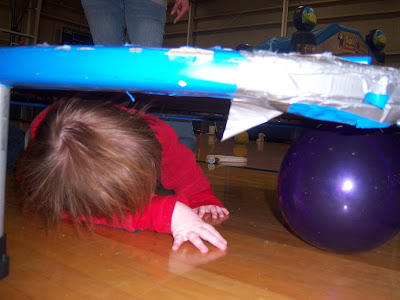 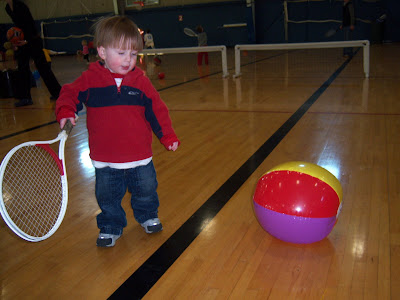 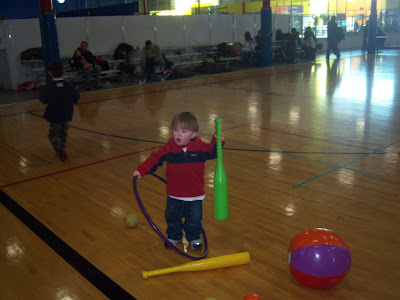 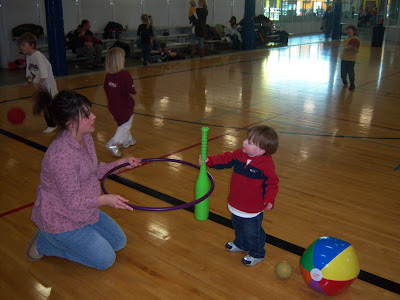 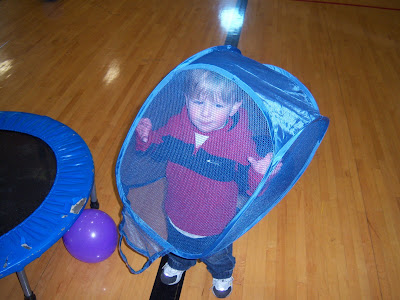 This video is funny for the crash landing at the end

In a month or so, Harry is going to have to share his entire world, and we're not sure how that's going to go! He points to the Pack n Play at the foot of our bed (that thing is so effing big-- we have to stand up on he bed and curse to change the channel on the TV) and pretends to cry like a baby (which might be the most annoying noise on earth, although I imagine it will get much more annoying when there's a baby crying, too). If you ask him how to make a baby stop crying, he'll tell you the baby needs to eat. When asked what the baby eats, he replies with a very matter-of-fact "Ham. Cheese." Since those are his favorite foods, maybe this answer bodes well for sharing? Ah well. A girl can dream.
Posted by Sarah at 9:00 AM

Oh gosh the showdown at Old Navy cracked me up. So did "stand on the bed and swear" to change the channel. Hysterical. Charlie asks for more grapes until he has one in his mouth and one in each hand. Maybe we have a future hoarder on our hands.

he just has a good sense of self...you have raised an individual with a mind of his own..congratulations....Bomma

Talk to Lee - he's having a similar problem with Brinkley. It's gotten so bad Brinkley has to wear a muzzle and Lee breaks out in a cold sweat at the sight of balls.
Boo

I laugh every time I watch that video!Ben laughs at the end, and I laugh with him!

My son really hoards things... and he hides them too. He will be a yr old in a week and his hoarding and hiding has gotten worse. He hides food under the couch, along with small toys and things of mine, like my cell, shoes, and hair accessories. He also hides snacks, keys, sippy cups, spoons and knick knacks under the washcloths in the bathroom. I don't know why, and he is FURIOUS when we move ANY of his collected items... what should we do?