Our second anniversary, that is. Feeling a little nostalgic, I dug up some honeymoon pictures this morning. Ahh, Cancun. We were going to Riviera Maya, but a hurricane (not Emily, but the one after that) forced us to change our plans a week before the wedding. We were freaking out because we almost had a destination wedding in Mexico (and by almost, I mean it was heatedly debated in 2004), and we were thinking of what a pain in the ass it would be to change EVERYTHING. We were happy to have a travel agent who WASN'T freaking out, and we ended up at the Golden Crown Paradise Spa, which, despite having a silly name and only 4 restaurants, was totally awesome (and by totally awesome, I mean it had a great beach; our room had a beautiful view, and we were never more than ten steps from a bar).

Sunrise from our balcony (or maybe sunset-- either way, pretty). 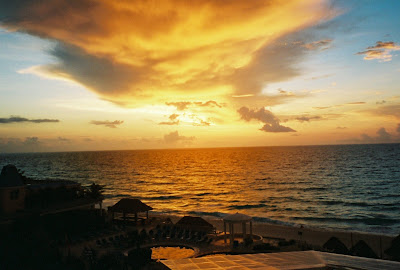 We got up with the sun every morning, so that we could get these seats. 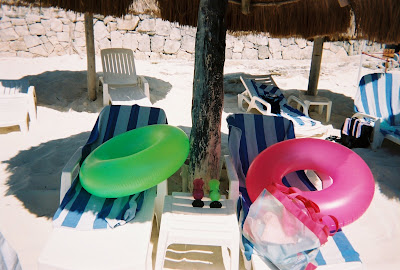 And yes, you could argue that we took the pink and green theme from our wedding a little too far with our tubes and cups. Oh, and it was hard for me to buy these things in the hotel gift shop because I couldn't understand the terribly difficult peso-to-dollar ratio (10 pesos to 1 dollar, duh), so I would see a price tag of $24, and I'd think "Twenty-four dollars for a cup! Ridiculous!" Yeah. 24 pesos, you jackass. I think it was the dollar sign that threw me off. But the money thing got me for 10 days straight-- I was constanly getting pissed off about $9 gum and $100 floaties. Speaking of, here we are with our tubes-- all we did all day was drink and bob in the ocean or the pool. Then, we'd haul our drunk asses to the buffet for lunch and one of the themed restaurants for dinner. Our favorite was the fish place because it had the best view. We hated the "fancy" restaurant because they had a silly dress code-- so weird, since most people were hanging out topless all day-- ANY shirt seemed like it'd be okay for dinner. Oh-- and men had to wear closed-toed shoes, so Ben couldn't wear his leather J Crew flip flops, but he could wear his Target aqua soocks (yes, we brought aqua socks. But no fanny packs). 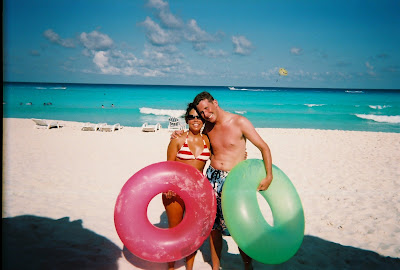 Most of the other guests (either old people, other honeymooners, or young British singles traveling in huge groups) went to clubs in Cancun at night, but not us! We had plenty of excitement at one of the many hotel bars. Besides, we had to get up early for our chairs. 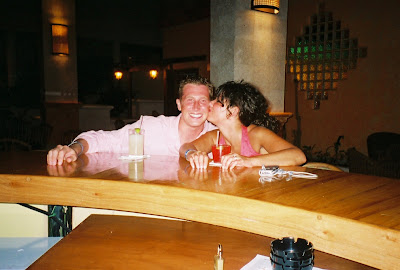 Clealry, we're meant for each other! 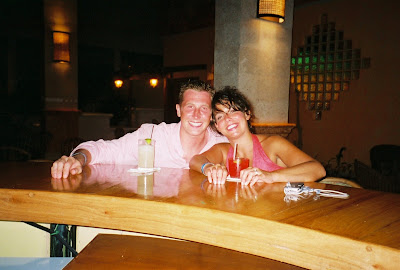 Hey, Ben-- if you're reading this, let's go back there tomorrow-- Harry can come too. I'm sure he'd love the sand! 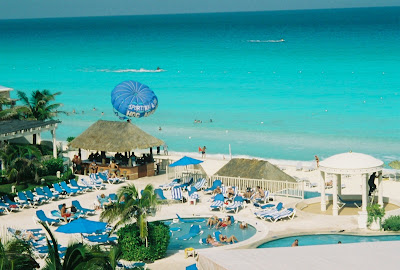 Happy Anniversary and Happy Life and at least 80 more...Bomma and Jack

Aww, you are meant for eachother! Looks like a blast, you should totally go back with the little guy.

I think we do have the same kitchen table... mine did have green legs but we painted it blue to match our coffee table. Spooky!

Happy Anniversary! I can't believe I really thought it was wood!

Happy anniversary! Your time in Cancun sounds like our time in Maui. Sigh...