Y'all remember Harry's Old MacDonald book? The one that he was obsessed with and brought to us a bajillion times a day, saying "EIEIO?" Well, in Des Moines in May, Bomma got him a Noah's Ark book that looks just like it, with one notable exception: 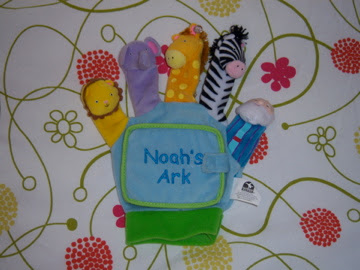 It's a different story, right? Well, not in Harry's world. Harry will stand patiently there and listen to the story of Noah's Ark, but he just thinks we're reading the book wrong and says "EIEIO" over and over again,pretty nicely, considering how stupid he must think we are, until we sing Old MacNoah.

So, here's my question. I know what the lion says. I know what the elephant says. I can make up plenty of things for ol' Noah to say (things you never heard in the Bible, that's for sure), but what does the zebra say? How about the giraffe? For awhile the giraffe was making horrible death noises because the giraffes at our zoo died a horrible death, but now we have new! live! fresh! giraffes, so I am, once again, at a loss.

Suggestions?
Posted by Sarah at 8:03 PM

I'm giggling thinking of the horrible noise the girrafes make.