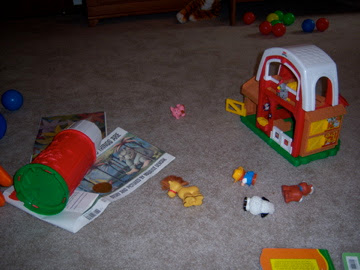 Injured farmer Red-Haired Plastic Guy With the Funny Hat credits his amazing survival to the apparently kind act of a usually menacing giant toddler, who crammed the farmer, along with his cow, sheep, horse, pig, and several unsuspecting passengers of a downed Little People Airlines flight headed for The Kitchen, inside Farmer Red-Haired's own silo.

"Usually I think that drooly enormous baby is a crazed would-be killer," Farmer Red-Haired told reporters. "I mean, you try spending days on end in a tight space with your own sheep, a luggage rack, and some really big socks," he added, noting that the baby giant's plastic blocks can be suffocating. 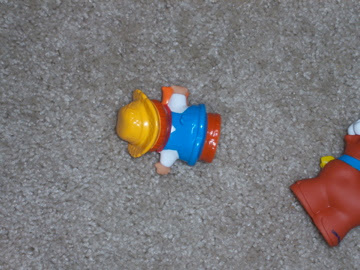 The farmer, pictured the way rescuers found him after the storms passed, expressed his belief that the residents of Harry's Room County are being denied FEMA aid because of size-ism, stating firmly, "This is discrimination, plain and simple. Thank goodness my silo landed in a pile of ridiculously large books. I think I can salvavge it. As for my crop of really teeny corn and soy beans? Well let's just say the farmer's market is out of the question next weekend. I'd say that's a disaster."

Farmer Red-Haired can only hope the President arrives at the same conclusion and declares Harry's Room County a federal disaster area, preferably before the huge toddler wakes from his morning slumber and inflicts more spitty damage on the ravaged farm.
Posted by Sarah at 10:33 AM

I love this one! As Uncle Larry says, "LMAO!"

Well, thank God the little people are ok. They've had quite a year with recalls, storms, floods!

I cannot stop laughing. Too funny.