Even Though the Brewers Won, We had Some Fun at Miller Park 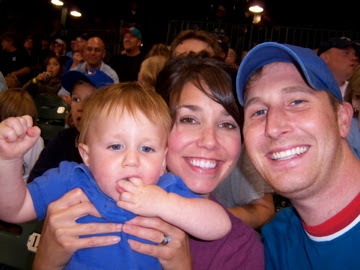 Until the bottom of the first. Because that's when we had to give up our seats with this view. 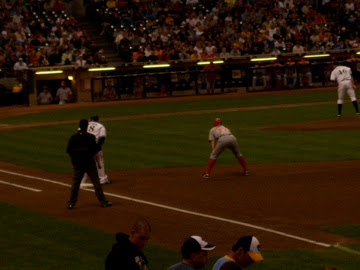 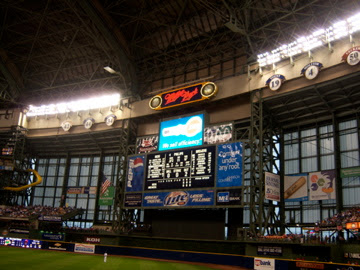 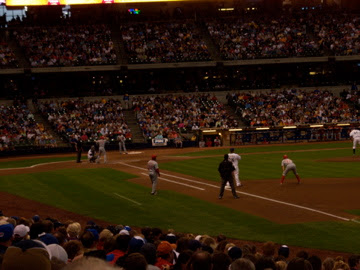 Why'd we leave these cool seats? Well, first of all, we were wedged in between some of the fattest people in America. Seriously. If you have to buy two plastic ponchos to stay dry while you tailgate before the game, then you should also have to buy two tiny little stadium seats. But it's not their fault. I blame Wisconsin. I have never seen so much food and alcohol. Seriously, you can buy liquor at all the beer stands, PLUS there are all these little margarita and bloody mary kiosks, and if you don't want the Miller served at all the food places, you can hit up the many, mnay Leinenkugels carts.
Mainly, though, we had to leave because Harry was making this face 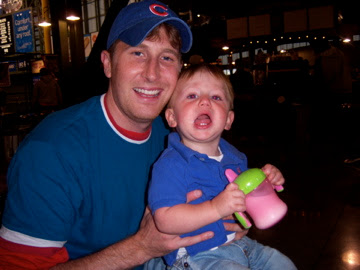 which was accompanied by various screams of "Aughhhh," and "No, no, no, no, no."
Here's his cupholder, which kept him busy for like two pitches 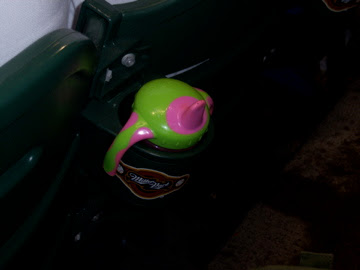 Then we bought him a big foam hand and walked around the park until the third inning. 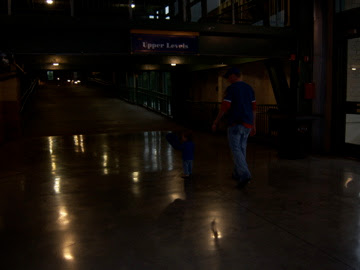 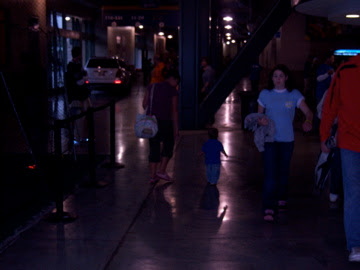 We got his picture with Bernie the Brewer, who was actually kind of a dick. We didn't think much of it (thought maybe he was late getting to his ridiculously patronizing slide and dugout in the bleacher section or that his big stuffed head was heavy, hot, and vomit-smelling, but then we remembered that Ben was decked out in full Cubs regalia. Maybe WE were the dicks? 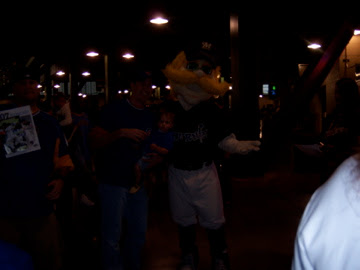 I mentioned the taligating, but you have no idea. People had TENTS, smoldering grills (that were still smoldering on the way out), cheese platters, SO MUCH sausage, bean bag toss games, and the liquor-- it made the stadium look dry. And it was pouring rain and about 50 degrees, which did not deter these people at all. Packers fan, doncha know? We were heckled quite a bit as we ran from our car to the stadium (Harry, by the way, thought the rain was a big ol' sprinkler on just for him and kept sticking his face out from under the umbrella), and we didnt know why. Until we remembered the Cubs wear and realized that without Harry, Ben would have gotten beaten up at least twice between the car and the park. Oops.

[Eddited to Add: Ben wanted me to say that people were also giving him the Cubs score, presumably in solidarity. I, however, maintain that it was dickish to Cub out, given the high stakes of the current NL Central rivalry and feel the need to mention that none of the score-givers were in Cubs gear.]

There were people in cubs gear. Sarah is just making me look worse than I am. For instance she forgot to mention the 3-5 other people in the stadium that gave me a high five because they too were in a cubs hat or shirt or both, or the 99 year old man sitting directly in front of us wearing a cuibs jacket. I was not alone rooting for the reds in my cubs gear at the Brewers game.

I snorted a little when you said "Bernie the Brewer is kind of a dick." Looks like fun! I can't wait to take Charlie to a minor league game in our new town.