Then I get a picture like this one, and I remember that he is, in fact, a teeny, tiny, baby-lotion scented mini-Ben 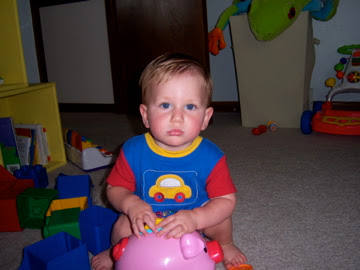 Some of our friends say things like, "Harry used to look like Ben, but lately, he looks more like you, Sarah." (I do have a picture of a newborn Harry that is positively INDISTINGUISHABLE from Ben's hospital picture) My mom and my grandma (hey, guys! keep the comments coming) always tell me how much Harry looks like me or my siblings, but really? He doesn't. Maybe sometimes-- a fleeting moment, an occasional angle, the way he holds his round little head-- but then-- poof-- the likeness is gone, and he's back to Benville.

(I mean, just the other day, Ben was wearing HIS beep-beep romper and squatting on the floor playing with HIS piggy bank, and the resemblance was amazing.)

How lucky am I to have such an adoorable toddler Ben clone? Most of our friends always say "Wow! He looks exactly like Ben-- sorry Sarah," as if they are hurting my feelings when they tell me Harry looks like his Daddy. First off, it's cool because I am pretty sure that's my kid-- I was totally there when he was born, and he didn't leave our sight for even a second in the hospital. Well, the pediatrician took him away to circumsize him (yikes, sorry about that, little buddy), but he came right back-- the rest of the time we just stared at him in his plastic basinette thingy or shoved my nipple in his mouth thinking, where's the freaking milk already?

Second (see? even though I digress as usual, my signposts keep this mess right on track), I L*O*V*E that he looks just like his daddy-- why wouldn't I? I love his daddy, after all. So, if you think Harry looks like Ben, that's cool because HE DOES, and he's preshus, and you don't need to apologize.

Sometimes I wonder if it weirds Ben out to look at Harry and think "Wow. That is exactly what I looked like when I was (almost) 14 months old. I wonder if I made that same face when I ate avocado? Probably, since we have the same face. I wonder how I'd look in those plaid shorts? Pretty good, I bet, since I have the same shorts upstairs in a slightly larger size."

Hey, are you digging Harry's concentration and his combover? I know I am! 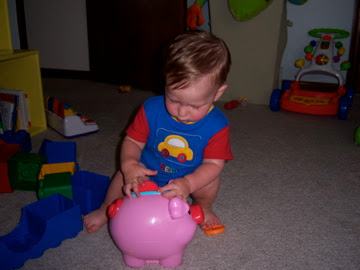 I still think Harry is a compilation of the best features of both of you...but, mostly he is just Harry....Bomma

Yeah, what she said!