Our campus common reading program started 10 years ago, when Harry was 2.  A the first author reception before the first keynote event, a political science professor that I admire brought her daughter, and I thought Oh how awesome!  Maybe someday I will be able to bring a kid with me who has read the book, too.  At the time, on the cusp of my thirties, with a toddler and a baby at home, this seemed really, really far away.

And then.  Last night. 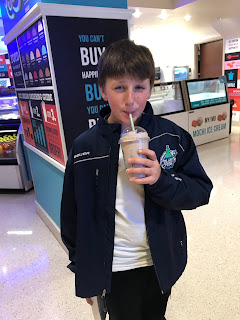 Harry, who attends a junior high magnet school focused on environmental science, was so excited to read this year's common read The Death and Life of the Great Lakes by Milwaukee journalist Dan Egan.  He has been super stoked about the chancellor's author reception and the keynote speech, and last night, he was my plus one for both. 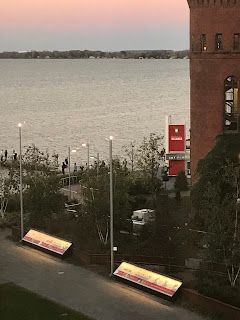 We skulked around the corners of the fancy reception eating desserts and drinking (decaf) coffee and just as we were about to follow a few water science grad students over to Egan (who had his teenage daughter in tow) for a signature in Harry's book, the program coordinators hustled him off to prepare for his talk.

So Harry got a milkshake to go with his reception Sprites. 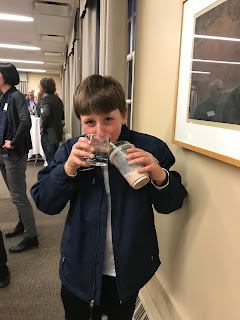 The theater was packed with over a thousand students, faculty, and community members. 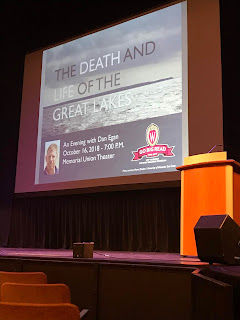 We eagerly anticipated Egan, and we were delighted by his engaging, hopeful, deeply personal talk 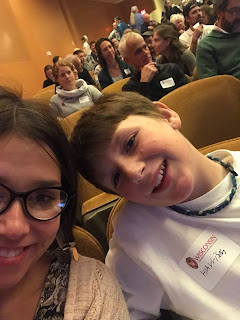 And then!  YOU GUYS!  During the Q and A, Harry leaped over me and strode to the back of the house to stand in the question line behind a microphone.  AND THEN, in a room full of over 1000 people, HE ASKED A QUESTION-- one that was thoughtful and engaged and to which Egan gave a very serious and substantive answer. (He wanted to know about the blue green algae blooms that threaten Madison's lakes every summer and what we can do about them).

I was so proud!  And I could not even believe that the child who could barely talk when the Go Big Read program began is old enough to participate in the program, read the book, and ask the author a question. 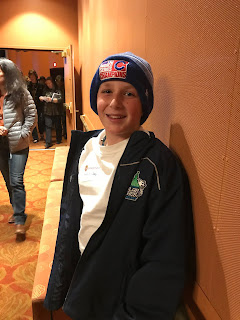 He had a more policy oriented question about Nestle and the 2008 Great Lakes Compact that he texted me for asking at today' smaller author event that he can't attend because school project (those pesky middle schoolers and their dedication to their studies).  I promised to ask it, but Egan was very deft at avoiding policy talk in any kind of specific way.  At first I was disappointed by this, but clean water is one of the few bipartisan issues in our town, and I think it's best for the lakes if it stays that way.

I can't wait for next year-- Jack wants to give the book a try, too, whatever it turns out to be.
Posted by Sarah at 6:00 AM

That is so awesome! Way to go, Harry!

I have chills. This is amazing!! Go Harry!