It's breast cancer awareness month! Get a mammogram!

Heck.  Get TWO mammograms and a breast ultrasound.  Really treat yourself.

On October 3, I went to the doctor for my very first baseline mammogram.  I snapped this pic after I awkwardly folded down the top of my dress and tied the arms around the waist and put on my lovely gown. 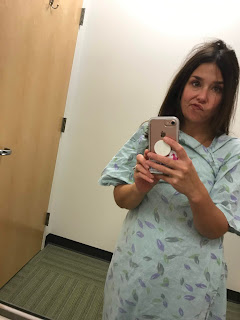 I thought I would post it on my Insta-stories after I got the all-clear that I was expecting to get.  I mean, I just turned 40.  I don't have any risk factors.  I feel no lumps during my self-checks, and in the last calendar year, my GP has given me a breast exam, and so has the OB nurse practitioner I saw for my peri-menopause.

I walked out of the clinic thinking You know?  That wasn't as bad as the dentist.

But then.  Driving home (I WASN'T EVEN HOME YET), I got a call from my doctor's nurse telling me the mammogram showed asymmetries on both sides and I needed to come back for a diagnostic mammogram and a breast ultrasound.  In 6 days.

Do you know how long six days are when someone says diagnostic mammogram?

Six days was yesterday, and I was terrified.  TERRIFIED.  Especially when the mammographer casually mentioned that she was taking extra pictures of the lump on the right side.  Lump!  That was the first time in this situation that anyone had said the L word.  I had been consoling myself for days with thoughts of "dense tissue."

When she literally twisted my left breast like she was rolling a cinnamon roll and THEN compressed it between the machine's plates, the terror lifted, briefly, due to discomfort, so that was good.

The ultrasound tech was the same one who did Dorothy's 20-week anatomy scan and the same one who told us our 10/4 baby was no longer possible, so I was happy to see her.  She's very calming and reassuring and good at her job.  Within minutes, she told me that she found the lymph node on the right side and that it was, in fact, a lymph node.  "Lymph node" is poetry compared to "lump."  She scanned and scanned and scanned my left side and found nothing but normal tissue, and it was so wonderful that she could say all of this to me during the scan.  Even though it was a hot day yesterday and the air conditioning in the clinic was broken and the room got so warm the machine shut down (after the scan was over), and I couldn't wear any deodorant for the scan, I felt better than I had felt in 6 days.  When the tech left to talk to the radiologist, she told me that she'd be shocked if the doctor would have anything to say to me but "Come back next year."

And that's what she said.

Because even though this experience was scary, it made me appreciate the power of early detection.  My lumpy lymph node is not palpable.  Even though friends-- including one I used to hang out with every week-- have recently had breast cancer, I was smugly sure that my statistical lack of risk factors would keep me safe.  That's silly, though.  Early detection saves lives, and it's easy to be the cocky grad student who is critical of pink washing and the carcinogenic industries that support breast cancer research and even the infantalizing, patriarchy-bolstering ways that women are figured as patients.  But all of these things look different on the wrong side of 40 when you are in your hospital gown open in the front like a shirt they keep saying but I would never wear a shirt that looks like this.  When you are standing in a room with the kind-eyed woman who is smashing your mammaries or lying on a table next to the woman who is pressing them with an ultrasound wand while she murmurs reassuring things to you.  When you are waiting for the phone call or hoping you just get a form letter in the mail.

Become a tiny cog in the women's healthcare machine, and get a mammogram.  Make an appointment today, why don't you?  It's breast cancer awareness month, after all.
Posted by Sarah at 11:03 AM

I've gotten that scary phone call, twice. And it is terrifying. Yet there is something ultimately empowering about getting a mammogram - that empowerment makes the nerves and discomfort so worth it! Thank you for posting this!